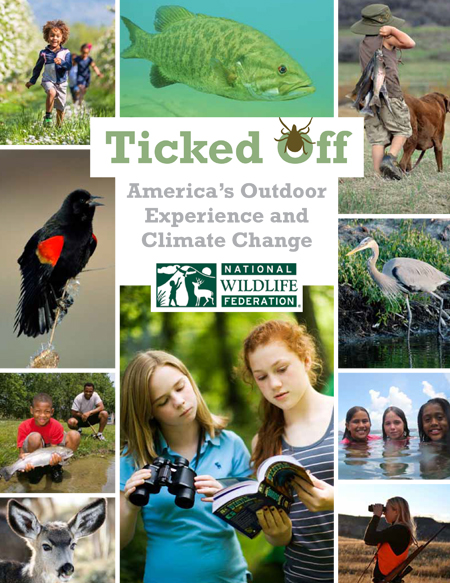 The great outdoors we cherish so much is an ever-changing world. Move a few miles and you may be swimming in a pristine lake instead of climbing a rugged mountain. The changing of the seasons may have you snowshoeing on a familiar trail you were hiking just a few months ago. The storm-driven winds of yesterday are replaced today by a breeze gentle enough to barely flicker a candle flame. The silver flash of a leaping fish quickly becomes a mere ripple on the water’s surface. The riotous flowers of spring grow into fruits and seeds to start the cycle of life all over again. Every cloud and snowflake has a different shape and every evening a different sunset. This is the great outdoors.

But climate change is bringing about stressful new changes to our outdoor world, and we need to take notice.

Extreme weather is becoming more common. Droughts and floods are more severe and more frequent. Winter snow is melting away earlier in the spring and fall weather is slower and slower to come about. These and other aspects of climate change are impacting the plants and wildlife that are a central component of the American outdoor experience. We might like an early spring, but so do tiger mosquitoes with their bothersome presence and bites. An Indian summer may be welcomed by us, but it helps winter ticks survive in huge numbers…enough to suck more blood out of a moose than its body contains. Warm winters are a welcome mat for fire ants and deer ticks to expand their range northward where they can inflict pain or disease on unsuspecting people and wildlife. Poison ivy, which we always steer away from, is growing faster and becoming even more toxic, thanks to the rise in carbon dioxide in the atmosphere.

How is climate change impacting your outdoor experience? Concrete examples are provided by Ticked Off:

While mosquitoes and their bites are irritants, of even greater concern is their potential for disease transmission. Asian tiger mosquitoes are known to transmit more than 30 different viruses, including West Nile, eastern equine encephalitis, dengue, and chikungunya, all of which pose serious human health risks. And in some places, the Asian tiger mosquito is the principal source of heartworm infections in dogs. Climate change is projected to bring about an earlier emergence of tiger mosquitoes in the spring, leading to more generations per year.

More than 350,000 cases of poison ivy are estimated to occur annually. You can ‘get’ poison ivy from direct contact, or by indirect contact by touching affected clothing or a pet. The irritating rash can last up to three weeks after contact.

There are many different species of ticks and many different diseases they can transmit. The most well-known is the blacklegged tick (Ixodes scapularis), commonly known as a “deer tick,” which transmits Lyme disease. The bacterium that causes Lyme disease is picked up by deer tick larvae and nymphs when they feed on infected mice. Most of the ticks that bite and infect humans with the disease are nymphs, which are most active in the summer months when people and pets are also most active. With climate change, these ticks are projected to be more widespread than ever before.

Fire ants bite and sting en masse, injecting venom that causes extremely unpleasant burning sensations and blistering. These ants can be deadly to wildlife, especially young that are relatively immobile and unable to escape their attack. Ground nesting birds, as well as lizards, snakes, mice and other native wildlife are at risk of attack and declines in abundance.

The red imported fire ant is projected to benefit from warmer temperatures due to climate change. By the end of this century its range could advance northward by about 80 miles, spreading further across Texas, Oklahoma, Missouri, Tennessee and Virginia.

We don’t have to and shouldn’t stand by and accept what climate change is doing to our planet and our outdoor experience. There are ways to protect ourselves from the pests and poisonous plants that climate change is helping to proliferate. We must also take action as a nation to combat the root of the problem – carbon pollution. We already have the technology and know-how to reduce our carbon pollution by expanding our use of renewable energy sources and increasing energy efficiency. And we can take action to help safeguard wildlife from the impacts of climate change for future generations to enjoy.

Climate change is posing growing challenges to many aspects of our lives, including the outdoor experience.