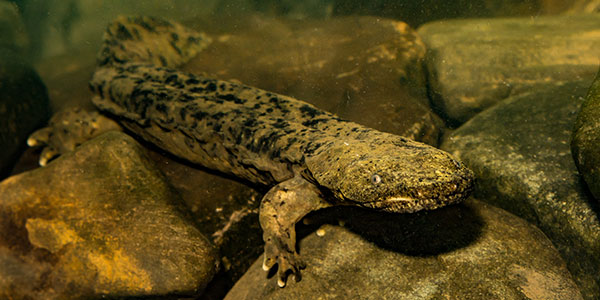 The hellbender—sometimes called a “snot otter”—is a large, fully-aquatic amphibian with a flat head, wrinkled body, and paddle-shaped tail. Its body is usually dark gray or brown with irregular dark spots along the back. Although sometimes confused with mudpuppies, hellbenders are easily distinguished by their lack of external gills. Reaching four to five pounds (1.8 to 2.3 kilograms), the hellbender is the largest salamander in North America by weight. Adults average 20 inches (50 centimeters) in length, but can grow up to 29 inches (73 centimeters).

Two subspecies of hellbenders exist in the United States. The Ozark hellbender (Cryptobranchus alleganiensis bishopi) lives in a small number of rivers in Missouri and Arkansas. The eastern hellbender (Cryptobranchus alleganiensis alleganiensis) is broadly distributed throughout the Appalachian region (southern New York to northern Georgia) and also occurs in Kentucky, Ohio, Indiana, Illinois, and Missouri. Hellbenders typically live under large rocks or boulders that are partially buried in cold, fast-flowing streams. These rocks provide protection from predators, and hellbenders may abandon a habitat if the rocks are removed or disturbed. Juvenile hellbenders have many predators, including fish, turtles, water snakes, and other hellbenders. Adults have few predators, but may be eaten by raccoons, minks, and river otters.

Hellbenders eat primarily crayfish and fish, but have been known to occasionally eat insects, tadpoles, and even other hellbenders (including eggs). With its large, gaping mouth, the hellbender can eat an animal that is almost as big as itself.

Hellbenders mate in the fall, under large “nest” rocks. Females lay a double strand of 100 to 500 eggs, which are fertilized externally. Males guard the nests, and eggs hatch in about two months. Larvae are about an inch (2.5 centimeters) long and have external gills. When hellbenders are about two years old, the gills disappear and they start breathing entirely through their skin. Hellbenders reach sexual maturity at around six to eight years of age. The hellbender’s lifespan in uncertain. Captive individuals have lived up to 29 years, but one study suggests hellbenders may live 50 years or more in the wild.

Hellbender populations have declined throughout most of the species’ historic range. The Ozark hellbender is federally endangered, and the conservation status of the eastern subspecies is currently being evaluated by the U.S. Fish & Wildlife Service.

Hellbenders have large, simple lungs that are used for buoyancy instead of breathing.

The Ozark Hellbender: Can We Save It?, U.S. Fish & Wildlife Service