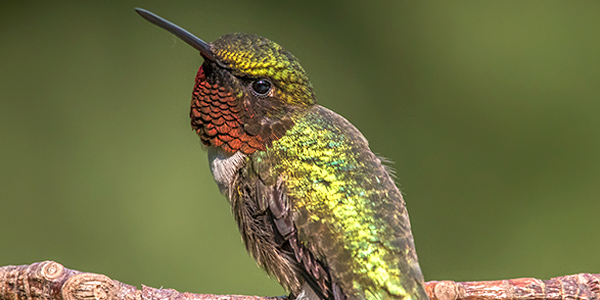 These hummingbirds are very small, growing only 3.5 inches (nine centimeters) tall and weighing less than a quarter of an ounce (seven grams). Male and female ruby-throated hummingbirds look very similar, except for one large difference. The males has the ruby throat that gave the species its name, while the female's throat is white. Both the males and the females have a metallic green head, back, sides, wings, and tail, and a white chest and belly. In different lighting, the male's throat can appear pink, red, or even purple.

Ruby-throated hummingbirds spend their summers throughout the eastern United States. In autumn, they migrate to their wintering grounds in Central America. Some ruby-throated hummingbirds have been known to winter in southern Florida. They prefer habitats where there are a lot of flowers, such as fields, parks, backyards, and open clearings in forests.

Ruby-throated hummingbirds use their long, needlelike bill to eat nectar from flowers such as salvia, trumpet creeper, bee balm, thistle petunia, and jewelweed. They will also gladly feed from backyard hummingbird feeders, which the birds may make part of their territory. When a ruby-throated hummingbird marks its territory, it will defend it against all potential enemies, including other birds, large insects, and even small mammals.

Eggs incubate for about two weeks. The young can fly as soon as 20 days after hatching.

The ruby-throated hummingbird is not considered threatened. It can often be attracted to yards with hummingbird feeders, but these can create a problem if placed in areas where they make hummingbirds easy prey for cats or other animals. The feeders also pose a risk if placed around windows that the birds may fly into.

1. Hummingbirds beat their wings so rapidly they can fly forward, backward, and even hover in place.

4. They use their thin beaks and long tongues to drink nectar from flowers.

5. Hummingbirds feed on tiny insects and spiders. They rely on these invertebrates as food for their young.