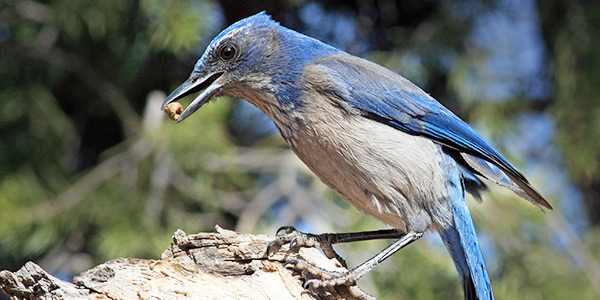 Western scrub-jays have long tails and small bills. The head, wings, and tail are blue, the back is brown, the underside is gray to tan, and the throat is white. Unlike Steller’s jays and blue jays, they do not have a crest. Western scrub-jays include several subspecies that live along the Pacific coast and in the interior West. The Pacific coastal group has a distinct blue collar and is brighter in color than those of the interior West. They also have beaks that are short and hooked for eating acorns, while interior scrub-jays have longer, more pointed beaks for extracting pine nuts from pinecones. Their behavior can be bold and inquisitive, and their calls can be loud and raucous, although the jays of the interior tend to be quieter and their calls are lower-pitched than those of the coast. Western scrub-jays are about 11.5 inches (29 centimeters) in length with a wingspan of just over 15 inches (38 centimeters).

The Western scrub-jay does not migrate. It is found in the United States from Washington State south through California and into Mexico and east to Texas. Western scrub-jays are found in semidesert scrub, chaparral, and open oak woodlands near the Pacific coast, and dry mountain canyons with pinyon pine and juniper forests in the Rockies, but they prefer scrubby, brushy areas. Coastal subspecies are often found in backyards. Adult and juvenile jays must watch out for predators including raptors, common ravens, snakes, and other jays.

Western scrub-jays eat insects, fruits, nuts, berries, and seeds, and occasionally small animals. They often forage in pairs or family groups. Jays are known as planters of acorns. They scatter these in many hiding places for later retrieval. They move thousands of acorns each fall, often depositing them in damp soil. When some of these acorns aren’t retrieved, they sprout into seedlings and replenish the forest. Western scrub-jays have been shown to have an ability to plan ahead in choosing food storage sites, remembering the locations of their caches and storing enough food to plan for the future. Jays can also be quite sneaky when it comes to acquiring and storing food. They steal acorns from acorn woodpecker caches and from stores hidden by other jays, and then look around to make sure no one is watching before they hide their prize again. They have also been observed picking parasites such as ticks from the backs of mule deer.

Western scrub-jay pairs make basket-shaped nests of twigs lined with fibers and hair. Nests are built low and concealed behind foliage, generally in an oak or pinyon pine. They have one brood of one to five eggs. The young remain with the parents for about five months. Pairs stay together through the year. They are very territorial during the breeding season. Jays are relatively long-lived birds and can reach over 15 years of age in the wild.

Western scrub-jays are common, and some populations may be increasing. However, one subspecies in southeastern California may be vulnerable to disturbance and is listed as a species of concern in the state. Some populations are being affected by West Nile virus.

Western scrub-jays appear to have “funerals” in reaction to finding a dead jay. They will screech over the body, attracting other jays, for as long as 30 minutes and stay near the body for a day or two.