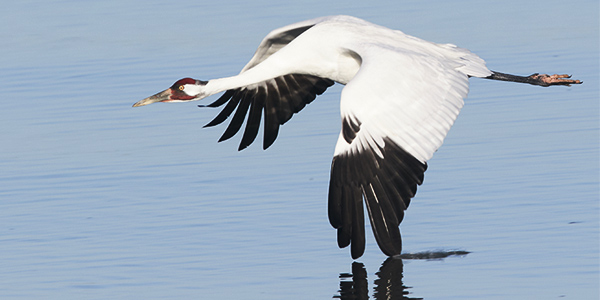 The most noticeable characteristic of the whooping crane is the large red patch on the head. The red patch extends from the cheek along the bill and over the top of the head. The red patch is made of skin and is almost featherless. Aside from the patch of red, whooping cranes are almost entirely white. The body and wing feathers are a bright white, except on the tips of the outer wings. The tips of the primary feathers are black. Whooping cranes have yellow eyes and thin, black legs.

With a height of approximately five feet (1.5 meters), whooping cranes are the tallest birds in North America. Whooping cranes have a 7.5-foot (2.3-meter) wingspan. They are lean birds, and despite their height, weigh only about 15 pounds (6.8 kilograms).

Whooping cranes call with a loud, trumpeting bugle. It's louder and more defined than the call of the sandhill crane. In flight, they also call with a deep trill.

Whooping cranes begin to look for mates and form pair bonds while they are still at their winter feeding grounds. When choosing a mate, the cranes perform elaborate displays. They will dance around, flap their wings, and call to a potential mate. The pair bonding continues as they fly to the breeding habitat in the north (the non-migratory population finds a mate and breeds in the same general location).

At the breeding location, the pair mates and together they build a nest. They lay one to three eggs (usually two), but normally only one baby crane survives. Both parents take care of the egg and the young crane as it develops. The juvenile crane becomes fairly independent early on, but still receives food from its parents. The juvenile stays with its parents throughout the first year, including the flight back to the wintering grounds. They can live above 20 to 25 years in the wild.

The story of the whooping crane plays out like a Hollywood script: it starts with tragedy, continues with struggles toward redemption, and ends with renewed hope and dreams for the future.

It all started in the 1800’s and early 1900s, as habitat loss and hunting drastically reduced the whooping crane population. Before human interference, there were believed to be 15,000 to 20,000 whooping cranes, which fell to roughly 1,400 in 1860 and then plummeted to an all-time low of 15 birds in 1941. All signs pointed towards the end of the whooping crane.

The 15 surviving whooping cranes all belonged to one flock that migrated between Wood Buffalo National Park in Canada and the Aransas National Wildlife Refuge in Texas. Conservationists worked with local, federal, and international governments to protect the flock and encourage breeding. Their efforts paid off slowly as the numbers reached 57 by 1970 and 214 by 2005.

Although the success of the flock was encouraging, scientists realized they couldn't depend solely on one group of birds—a national disaster or a sickness among the flock could be devastating. First, biologists tried to introduce whooping cranes in Idaho, but after several years, the population crashed and disappeared. A year-round, non-migratory flock of whooping cranes was introduced in Florida and became successful. However, the Florida whooping cranes never learned to migrate.

As it turns out, the future of the whooping cranes was tied to a small plane. Creating a new migratory flock of whooping cranes required teaching young chicks how to migrate without the assistance of adult birds. The International Whooping Crane Recovery Team decided to use an ultralight aircraft as a teaching tool to show the young whooping cranes how to fly from western Florida to Wisconsin. The program has proven very successful.

Whooping cranes are still endangered, but there is reason to be hopeful. Innovative scientists, like those from the International Whooping Crane Recovery Team, are thinking of new ways to protect this fragile species and make sure the story of the whooping crane does not end on a tragic note.

Whooping cranes are elegant flyers and are able to utilize wind and thermal gusts. If a crane catches a strong gust of wind, they can ride it for a good distance without flapping their wings.