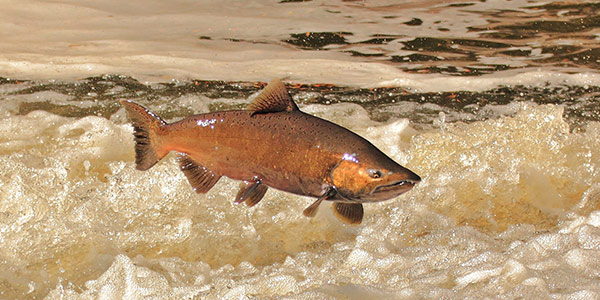 The salmon are blue-green on the head and back and silver on the sides. The fish’s tail, back, and upper fin have irregular black spots, and black markings also are present around the gums. Male Chinook salmon have a distinctive hooked nose at the top of the mouth and a ridged back. During the mating season, both male and female salmon develop a reddish tint around their back fins and tail.

Chinook salmon live in the colder upper reaches of the Pacific Ocean and breed in the freshwater rivers and streams of the Pacific Northwest. Their range includes the coasts of Alaska, western Canada, Oregon, Idaho, Washington State, and northern California. Chinook salmon have been introduced into numerous water bodies, including the Great Lakes. Outside of the United States, Chinook salmon can be found in Russian and Japanese waters.

These salmon utilize many different habitats throughout their lives. Adults lay eggs in fast-moving freshwater streams and rivers. Juvenile salmon spend some time in the freshwater streams before moving to estuaries with a mix of freshwater and saltwater. As the salmon reach adulthood, they move out into the open ocean.

Chinook salmon are anadromous, which means they are born in freshwater streams and travel to the open ocean to grow into adulthood. For the first year or so, the juvenile salmon stays in its freshwater habitat. Then it moves to estuaries and on to the open ocean, which provide a lot of food and nutrients to the developing salmon.

When an adult Chinook salmon reaches maturity, which can be anywhere from three to seven years of age, it makes the long migratory journey back to the site of its birth stream to produce young. After so many years, some salmon can be hundreds of miles away. At their birth stream, male and female salmon pair up to breed. The time of breeding depends on the river and the population of salmon, but most breed in the summer and autumn. A female digs a nesting hole (called a redd), where she deposits thousands of eggs before the male releases his sperm. After mating, the male and female stand guard over the eggs to protect them from predators. Chinook salmon burn a lot of energy migrating to the nesting grounds, breeding and protecting the eggs. Both parents will die before the eggs even hatch.

Some populations of Chinook salmon are federally listed as endangered, while others are listed as threatened. They are endangered in the Columbia River tributaries and California breeding sites and threatened in a range of rivers and streams throughout Oregon, Idaho, and Washington. Threats to Chinook salmon including overfishing, overuse of water resources, development, and habitat loss. Dams also pose a threat if the speed of water flow is altered or access to natal streams is blocked.

The Chinook salmon is an important keystone species of the Pacific Northwest. It is a vital food source for a diversity of wildlife, including orcas, bears, seals, and large birds of prey. Chinook salmon are also prized by people who harvest salmon both commercially and for sport.

The health of Chinook salmon depends on location—Alaskan stocks are very healthy, while those in the Columbia River are in danger. Protection of Chinook salmon is crucial to maintain healthy Pacific Northwest ecosystems and to provide a delicious food source for years to come.

In Focus: Salmon and Climate Change

From high mountain streams to broad rivers, to estuaries and the ocean, salmon species are our "canaries in the coalmine," alerting us to the impact of climate change on the health of our entire ecosystem. Salmon will be impacted by climate change in many ways.

Loss of Snowpack: Loss of snowpack and shrinking glaciers mean reduced stream flows in summer and fall. Not only would it would be difficult for returning salmon to reach spawning grounds and for juvenile fish to reach the ocean—lower stream volumes also mean warmer water.

Warmer Oceans: Warmer ocean waters and shifting currents are prompting a northward shift in the range of some salmon and other fish populations, such as barracuda and Pacific cod.

Sea Level Rise: Sea level rise may inundate low-lying estuaries, a critical habitat for salmon as they make their transition between river and ocean life stages.

Where salmon decline, animals that depend on salmon also suffer. To protect salmon, it's important to restore rivers and estuaries by removing unnecessary and harmful barriers, and to address the root causes of land-use problems. Protecting parks, wilderness, and roadless areas will help to save the best remaining habitat for salmon. Improvements to forestry and farming practices can minimize the impact of climate change on rivers, while improvements to fisheries management through the use of real-time monitoring, as well as maintaining genetic diversity, may help species adapt to a changing environment. Salmon may also benefit from an increase in water use efficiency and conservation of households, farms, and industry, as well as energy efficiency of homes, offices, motor vehicles, and factories. Moving forward it will also be important to anticipate climate change impacts when creating long-term water resource management programs.

Alaska Department of Fish and Game