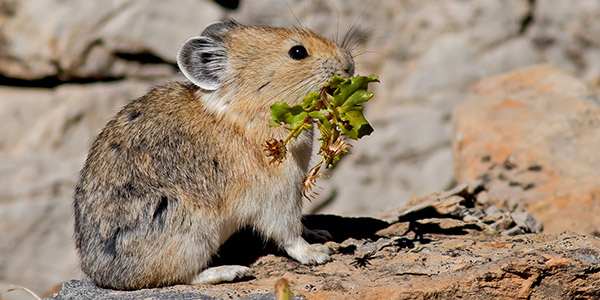 Despite their cuddly appearance, American pikas—the smallest members of the lagomorph group—are among North America's toughest animals. Pikas are one of the few mammals in the lower 48 states that can survive their entire lives in alpine terrain, the windswept no-man's-land above tree line.

American pikas are small, rodent-like mammals. Pikas have short, stout bodies with big, round ears and do not have a visible tail. Pikas reach a size of about seven to eight inches (18 to 20 centimeters) in length.

The American pika has a brown and black coloration, which is meant to camouflage them among rocks. Pika fur is thick to keep them warm in the winter. During the summer, they put on a much lighter coat of fur—however, the hair is still thick enough that a pika might overheat if exposed to very high heat for long periods of time.

American pikas are believed to have evolved from Siberian ancestors that crossed the former land bridge between Asia and Alaska. They once lived across North America, but have been retreating upslope over the past 12,000 years. American pikas now live on high-elevation cool mountains west of the Rocky Mountains. They can be found in Montana, Wyoming, Colorado, Idaho, Washington, Oregon, California, Nevada, Utah, and New Mexico, as well as western Canada. American pikas are found above the tree line in alpine terrain. They live on rock faces, talus (slopes form by rock debris), and cliffs near mountain meadows. Though most pikas in the lower 48 inhabit alpine ecosystems exclusively, some survive at lower altitudes where deep, cool caves are available, such as the ice tubes in California's Lava Beds National Monument. Weasels, hawks, and coyotes can prey on pikas.

Pikas are herbivores. They especially love grasses, weeds, and tall wildflowers that grow in their rocky, high-mountain habitat. In the winter months, fewer grasses and flowers grow in the mountains. To prepare for the lean times, pikas like to save up food during the summer. A pika will collect a pile of extra wildflowers and grasses and lay them out in the sun. The sun's heat dries the plants so they don't get moldy. The plants are stored in the pika's den until winter.

American pikas have adapted to living in very inhospitable environments. They live where most other mammals don't venture—the treeless slopes of mountains. It's very cold, rocky, and treacherous for the tiny pika. Pikas help protect themselves by living in colonies. They live near other pikas and will alert the group to predators by sending out a warning call. Although pikas live in colonies, they are very territorial over their den, which they build among rocks, and the surrounding area. They will give off territorial calls to define the boundaries between each pika neighbor.

Pikas are active in the daytime and they don't hibernate in winter. They are active throughout the year, but tend to spend most of their time inside the den in the winter. Pikas eat stored grasses to survive and venture out to forage when the weather permits.

In early to mid-spring, American pikas begin to breed. Many pikas breed twice—once in spring and again summer. The female is pregnant for a month before giving birth to a litter of two to six young. When born, the young cannot function on their own, and they depend on their mother for care. It takes about a month for the young to be weaned and three months to reach an adult size. After a year, the young develop into breeding adult pikas. American pikas can live around six to seven years, but many die after three or four years.

Pikas live in high mountain ecosystems that are cool and moist. The pika has adapted to life in areas that rarely get above freezing and can overheat and die when exposed to temperatures as mild as 78 degrees Fahrenheit. Unlike other mountain species that can move to higher altitudes in warming climates, pikas live so high on the mountain that there is no where for them to go. Trapped at the top, alpine wildlife is vulnerable to several of climate change's damaging effects, including vegetation changes, the invasion of new predators and pests, reduced winter snowpack, and increases in extreme weather events.

In the Great Basin—the arid region between the Rocky Mountains and California's Sierra Nevada—pikas already are disappearing. Scientists say the animal's decline may signal problems for other species, from butterflies and birds to large mammals.

American pikas are often heard before they are seen. They make calls and sing to define and protect their territory, alert others to the presence of dangers, and attract mates. The call sounds like the bleat of lamb, but more high-pitched and squeaky.