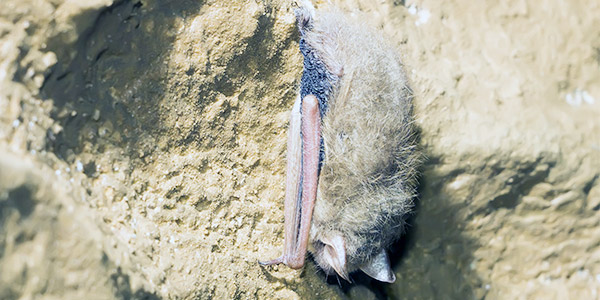 Indiana bats are dark gray or brown bats with soft fur. They look similar to little brown bats and northern long-eared bats. One way that scientists can tell the difference between these species is by the size of their feet and the length of their toe hairs.

Indiana bats are about 3.5 inches (nine centimeters) in length with a wingspan of 9.5 to 10.5 inches (24 to 27 centimeters). Like all bats, they must be incredibly lightweight to fly. Adults weigh an average of seven grams, less than the weight of two nickels.

Indiana bats are found from New Hampshire south to northern Florida and west to Iowa, Missouri, and Oklahoma. In the winter, Indiana bats hibernate in special roosting sites called hibernacula. Hibernacula are located in limestone caves, where bats cluster in the thousands. They migrate north in the spring and roost in tree cavities or under loose bark in trees such as shagbark hickory, elm, beech, birch, oak, maple, ash, sassafras, sycamore, pine, aspen, cottonwood, locust, and hemlock. Bats may travel thousands of kilometers during their migration. Predators of Indiana bats include snakes, owls, and raccoons.

Indiana bats are insectivores that prey on beetles, flies, moths, and other flying invertebrates. To locate their prey, most insect-eating bats use a system called echolocation, which is similar to sonar used in ships. The bat emits a high-frequency sound that bounces off objects in their environment. They can then determine the location and size of prey by listening to the echo sound that returns to them.

Mating takes place near hibernacula in the fall. Males mate with multiple females, but females don’t become pregnant right away. Instead, they are able to store sperm over winter so that their pups are born in the summer when food is more plentiful. Females form maternity roosts where they raise their pups under tree bark or in tree cavities. Pups rely on their mothers to take care of them when they’re first born, but they become fully independent within two to three months. Indiana bats usually only live 5 to 10 years in the wild, but they’ve been known to survive into their teens.

Indiana bats are federally listed as endangered. Although they have a large range, they have very few winter roost sites. They face a range of threats from humans while in hibernation. Spelunkers sometimes wake the bats out of hibernation, causing them to use up precious energy stores. People have also been known to invade roost sites and purposefully kill bats. Another major threat that emerged in 2006 is white-nose syndrome, a fungal disease that infects and kills hibernating bats. Indiana bats receive protection in the form of bat-friendly gates that keep humans out of their roost sites, but little is known about how to combat white-nose syndrome.

Even though Indiana bats have a large range, they were first discovered in Indiana, so they were named for the state.