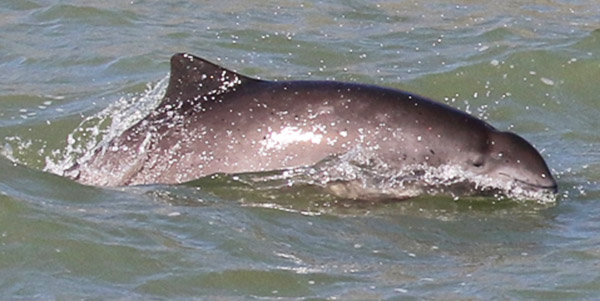 The harbor porpoise is shy and less playful than many of its relatives. Smoothly breaking the surface about four times a minute, harbor porpoises often make a loud puffing sound as they breathe. They take in and expel air through two blowholes, located near the top of the head. Distinguishing characteristics include their blunt nose, triangular dorsal fin, and black line from mouth to flipper. They are the smallest member of the whale family, about five to six feet in length, and weigh up to 200 pounds. Males are slightly smaller than females.

Harbor porpoises live in temperate and subarctic waters of the North Atlantic, North Pacific, and Black Sea. They are often found in saltwater and freshwater along coasts, bays, harbors, estuaries, and large rivers in waters generally less than 650 feet deep. Large sharks, orcas, and dolphins are potential predators of harbor porpoises.

Harbor porpoises feed on non-spiny fish such as herring, cod, whiting, mackerel, sardines, and occasionally squid or octopus. Harbor porpoises eat about 10 percent of their body weight each day.

Harbor porpoises travel most often in pairs, small groups of 6 to 10, and occasionally larger groups of 50 to 100. Females give birth to one calf every two years, usually between May and August. They nurse for 8 to 12 months. The harbor porpoise reaches sexual maturity at age three or four. They rarely survive beyond 8 to 12 years, but can live to 20 years.

Since harbor porpoises tend to stay close to shore, hunting and frequent stranding have historically plagued the species. The biggest threat, however, is commercial fishing gear, such as gill nets, which can trap and drown the porpoise. Overfishing may reduce the populations of their prey. Their habitat is at risk of chemical and noise pollution. All of these threats are more critical because mothers only have one calf every two years, which makes it difficult to replenish and grow their populations.

The name “porpoise” is derived from the Latin word for pig (porcus). As a result, harbor porpoises are sometimes referred to as "puffing pigs” because of the sound they make when they breathe.