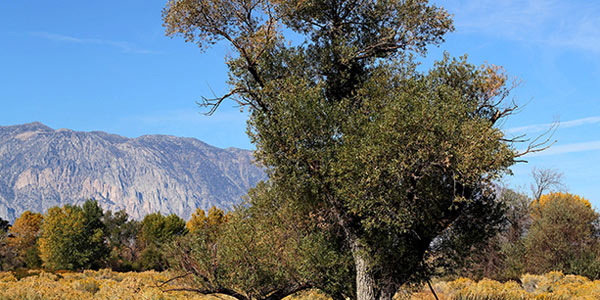 The Fremont cottonwood is a tree that grows in riparian areas near streams, rivers, and wetlands in the American Southwest. It has a broad, open crown and stout, widely spread branches. When the tree is young, the bark, branches, and twigs are smooth. As the tree ages, the bark becomes deeply furrowed with cracks. Its leaves are shiny, triangular to heart-shaped, and light green with white veins. The leaves have coarse teeth on the margins and turn golden yellow in the fall. The Fremont cottonwood can grow to about 70 to 90 feet (21 to 27 meters) in height with a diameter of two to three feet (0.6 to 0.9 meters).

As one of the major overstory trees in riparian areas of the western United States, and since riparian areas are some of the most productive wildlife habitats, the Fremont cottonwood is one of the most important plant species to western wildlife. Beavers use cottonwood for making dams and lodges and eat the bark for food. Rabbits, deer, elk, and moose feed on the tree’s shoots and stems. Many insects—and the birds and other predators that feed on them—thrive in cottonwoods. Raptors often use cottonwoods for nest sites. Once cottonwoods start to die, cavities in the trees are used by over 40 animal species for nesting or roosting. Hollowed trees are used by hibernating bears and sometimes bats. The trees are also important for stabilizing stream banks, producing debris that provides habitat for fish, and providing erosion control and shade.

Fremont cottonwoods are distributed throughout the southwestern United States, from California eastward to Nevada, Utah, Arizona, New Mexico, and Texas, and southward into Mexico. They are most abundant in areas near water. Cottonwoods dominate the riparian forests of lower terrace deposits and stabilized gravel bars.

The Fremont cottonwood is a very fast-growing tree. It requires moist soil for its seeds to germinate. It is dioecious, meaning it can have either male or female reproductive parts. Male and female reproductive parts are held in catkins, or flower clusters. The flowers are yellow-green in color and appear in early spring. The fruit they produce is a small, light brown egg-shaped capsule that splits three ways to disseminate many small seeds covered with cotton-like fluff for wind dispersal. Cottonwoods can live for more than 130 years.

Because of the land use in arid watersheds, the cottonwood riparian forests have been significantly decreased or destroyed. Livestock grazing has also been identified as a leading factor in the degradation of riparian habitats in the western United States. Also, ground-water pumping lowers local and regional water tables and reduces stream flow, which can eliminate or weaken riparian vegetation. Unfortunately there are no released cultivars of the Fremont cottonwood. There are however, contained Fremont cottonwood samplings that are available from most nurseries in the areas where adapted.

During the early days of exploration of the western United States, cottonwood groves were used as an indicator of water, as they grow only on wet soil.

The Department of Forest Resources and Environmental Conservation, Virginia Tech