Prairie potholes are important natural resources for people as well as waterfowl. They provide valuable, but often under-appreciated, ecosystem services that help people commercially, ecologically, and economically. They serve as natural sponges that hold excess water, which helps reduce the severity and risk of downstream flooding. They also recharge groundwater systems that supply water to farmlands and wells in the region. In addition, the potholes provide water and forage for livestock. And birders, as well as hunters, use the prairie potholes region as a destination for finding birds.Sweeping across five states (Montana, North Dakota, South Dakota, Minnesota, and Iowa) and three Canadian provinces (Alberta, Saskatchewan, and Manitoba), North America's prairie potholes are an important habitat and natural resource of the Great Plains grasslands.

As ancient glaciers retreated over 10,000 years ago, millions of shallow depressions were left in the Earth. These round depressions often fill with snowmelt and water in the spring, especially in wetter years, creating valuable seasonal wetlands that support rich plant and animal life. Many millions of ducks and other waterfowl come to the prairie pothole region every year to feed and breed.

The prairie pothole region is home to more than 50 percent of North American migratory waterfowl. Waterfowl breeding here include the pintail, gadwall, blue-winged teal, shoveler, canvasback, and redhead. Many other migratory birds—such as the snow goose, lesser scaup, and wigeon—pass through the region on their way to or from the Arctic and other northern breeding grounds.

The piping plover, American avocet, and Wilson's phalarope are among the shorebirds that breed in the prairie potholes region. Other shorebirds, such as the hudsonian godwit, American golden plover, white-rumped sandpiper, and buff-breasted sandpiper, pass through the potholes during their migration.

The U.S. part of the potholes region provides habitat for 40 species of breeding waterbirds, such as American white pelicans, rails, and herons. Many grassland birds are also found in the region, such as the bobolink, sedge wren, Sprague's pipit, Baird's sparrow, and the increasingly rare grasshopper sparrow.

The Great Plains are known as America's breadbasket. But before the farmers arrived, the Great Plains were the most extensive grassland in the world, with about 100,000 acres of prairie pothole wetlands. Today only a small fraction of the grasslands remain in small, disconnected fragments. The wetlands that remain are surrounded by agricultural lands and impacted by agricultural chemicals and excess sediments and nutrients that run off agricultural lands and into the potholes.

Conserving the remaining prairie potholes is important not only to maintain waterfowl populations, but also to improve both surface and groundwater availability for agricultural purposes, including grazing and crop irrigation.

For many years, ranchers and farmers have been given incentives through programs, such as the Wetland Reserve Program (WRP) and the Conservation Reserve Program (CRP), to set aside lands for conservation and to adopt new management practices that reduce their impacts on natural areas. However, in recent years, high prices have encouraged farmers to return CRP lands to agricultural use, such as growing crops for biofuels, putting the prairie potholes at increased risk.

Left unaddressed, climate change may dramatically reduce the suitability of prairie potholes for waterfowl. As open water and soil moisture decrease with rising temperatures and more severe droughts, many prairie potholes are expected to dry up more frequently or sooner in the spring, thereby eliminating or reducing their suitability for breeding waterfowl. Drought conditions brought on by climate change could dry up as much as 90 percent of the region's remaining wetlands, leading to a decline in breeding waterfowl in the region, and declines in other wetlands species as well.

Compounding the impact of climate change is the fact that the prairie pothole region has already much of its original wetlands, mostly to agriculture, and the losses continue. Thus, conserving the remaining prairie potholes is all the more important to maintain waterfowl populations, but also to maintain both surface and groundwater availability for agricultural purposes, including grazing and crop irrigation.

Minimizing impacts of climate change will require programs to secure conservation easements and discourage further draining or plowing of the remaining pothole wetlands. This is important to ensure that during times of severe droughts from climate change, a sufficient number of potholes with water are left to sustain minimal waterfowl populations.

Further protection from climate change can be achieved by undertaking efforts to restore degraded, drained, and destroyed prairie potholes across a broad expanse of this historic region. Studies have shown that the most suitable areas for waterfowl production vary from year to year within the prairie pothole region due to local climatic conditions.

Thus, conserving and restoring wetlands across a broad range is necessary so that as the region becomes dryer overall due to climate change, there will still always be some areas for waterfowl to breed. 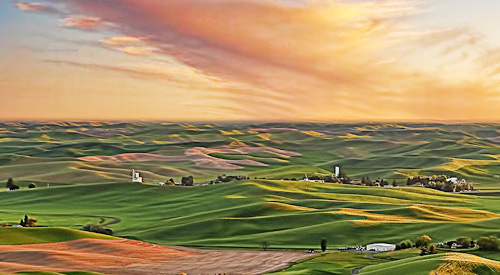