NOW AVAILABLE for 20 states with free shipping: Add one of our native plant collections to your garden to help save birds, bees, butterflies, and more! 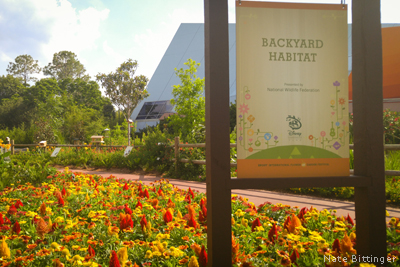 Each spring, the Epcot International Flower & Garden Festival at Walt Disney World in Orlando, boasts fun-filled garden exploration for every age and interest. The festival includes a Certified Wildlife Habitat garden developed by the National Wildlife Federation. This garden is a showcase of habitat native to the southeastern United States, including many plants native to Florida. In addition, it includes signage on the essential elements of a National Wildlife Federation Certified Wildlife Habitat: food, water, cover, and places for wildlife to raise young. During Earth Week (generally the third week in April), National Wildlife Federation staff and volunteers along with Walt Disney World’s education staff highlight the benefits of gardening for wildlife.

The garden is updated each year by Disney’s Horticulture team in consultation with the National Wildlife Federation. With new design features and a selection of annuals and perennials readily found in local garden centers, the habitat is designed to show visitors how they can plant gardens at home using attractive natives and non-invasive flowering plants which provide nectar for bees, butterflies and hummingbirds.

While the garden area may be transformed after the Festival ends each year, many of the trees and shrubs remain as year-round habitat. Some examples of the permanent plantings and the wildlife they support include: 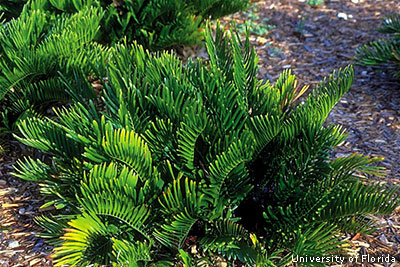 The coonties plant (Zamila pumila) is an evergreen perennial and unusual South Florida native. It is a slow-growing cycad—a "living fossil." These primitive plants were a dominant form of plant life during the dinosaur age.
Credit: UFL.edu 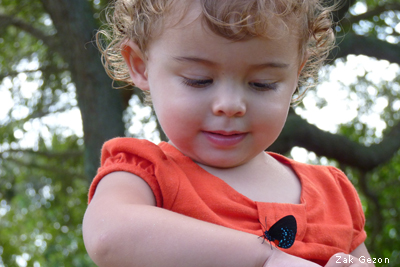 Their increased use in landscapes has encouraged the presence of the rare Atala butterfly within its natural range, which uses the Coonties plant as a larval host plant.
Credit: Zak Gezon 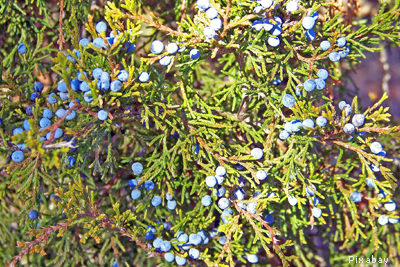 The native Southern cedar (Juniperus virginiana) is used as a wind barrier and backdrop for the garden and provides excellent cover as well as berries for visiting birds.
Credit: Pixabay 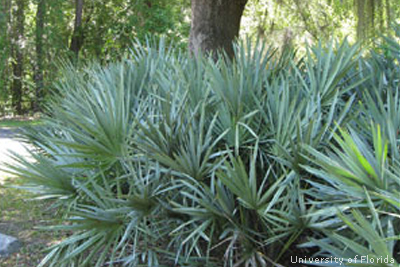 Saw palmetto (Serenoa repens) is endemic to the lowlands and savanna scrubs of the subtropical southeastern United States. The flowers are yellowish-white, and are followed by small, yellow berries that turn black, ripening August through October. These berries are an important food source for many mammals and birds, as well as the larvae of some Lepidoptera (moth) species such as Batrachedra lecoctor, which feeds exclusively on the plant.
Credit: UFL.edu 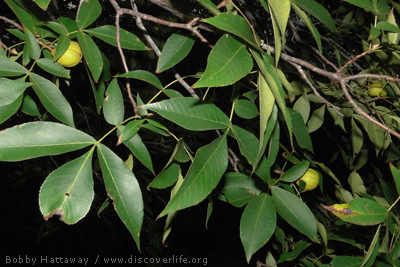 The pignut hickory (Carya glabra) is a common, but not abundant species of hickory. The pear-shaped nut ripens in September and October and is an important part of the diet of many wild animals.
Credit: Bobby Hattaway via discoverlife.org 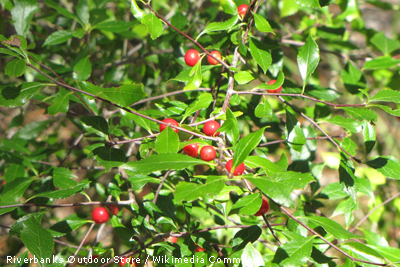 The Dahoon holly (Ilex cassinne) is a drought-tolerant southern native large shrub or small tree. The flowers are white with a four-lobed corolla. As with other hollies, it is dioecious, meaning that plants are either male or female. Only the females produce berries, and a male pollenizer must be within range for bees to pollinate them. The flowers provide food for pollinators, and the fruit provides food for visiting birds.
Credit: Riverbanks Outdoor Store via Wikimedia Commons 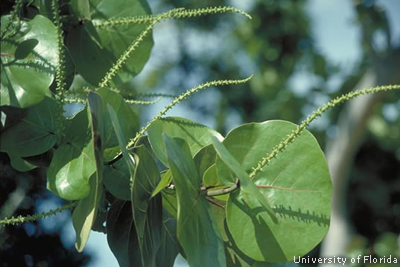 Seagrape tree (Coccoloba uvifera) is a species of flowering plant in the buckwheat family that is native to coastal beaches throughout tropical America and the Caribbean. Seagrape flowers produce ample nectar, making them an excellent food source for bees and other insects. In the summer, it bears green fruit that gradually ripens to a purplish color. These grape-like fruit provide sustenance for birds, squirrels, and other wildlife.
Credit: University of Florida 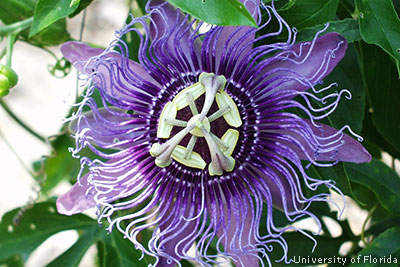 Wild passionflower (Passiflora incarnata) is a fast-growing native perennial vine with climbing or trailing stems. This and other passionflowers are the exclusive larval host plants for the Florida state butterfly, the zebra long wing. It is also a non-exclusive host plant for the variegated fritillary and Gulf fritillary butterflies. The nectar is used by pollinators and the fruit is an excellent food source for wildlife.
Credit: University of Florida

The National Wildlife Federation Certified Backyard Habitat garden at Epcot also celebrates the 20th anniversary of the Disney Conservation Fund which recently announced a new initiative called “Reverse the Decline, Increase the Time” which focuses on reversing the decline of at-risk wildlife species and increasing the time young people spend in nature. As part of the “Increase the Time” part of the initiative, the Disney Conservation Fund supports the National Wildlife Federation Butterfly Heroes program which provides monarch butterfly garden guides and seeds to children and families that make a pledge to plant a monarch-friendly garden. 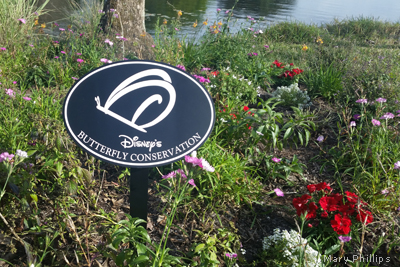 In the National Wildlife Federation’s Backyard Habitat Garden, Disney inspires guests to plant with a purpose and extends the invitation throughout Epcot’s Flower and Garden Festival with a focus on pollinators, and through long standing Certified Wildlife Habitats nearby at Disney’s Animal Kingdom and at the Horticultural Services Nursery.

Unique to the 2016 Festival was Outdoor Family Fun Weekend, a special 3-day period, April 8-10, which showcased the benefits of spending time outdoors at select Festival gardens, including National Wildlife Federation’s Backyard Habitat Garden. Over the course of the three days, education instructors from Disney’s Animals, Science and Environment Team spoke with 850 Guests while facilitating a hands-on activity that invited families to discover the importance of planting native plants in their own backyard. Newly installed pollinator habitat gardens throughout other Walt Disney Parks and Resort properties have been incorporated to encourage guests to participate in the Million Pollinator Garden Challenge.

The Horticulture team within Disney’s Animal Kingdom and Epcot have increased inclusion of pollinator-friendly plants with guidance from experts such as Disney’s Dr. Zak Gezon, and the University of Florida’s Dr. Jaret C. Daniels on plant selection, training of maintenance staff, and signage for the habitats and gardens.

Together, the National Wildlife Federation and Disney are providing opportunities for kids and families to learn about pollinators and their habitat while encouraging them to plant native gardens at home and connect with nature. 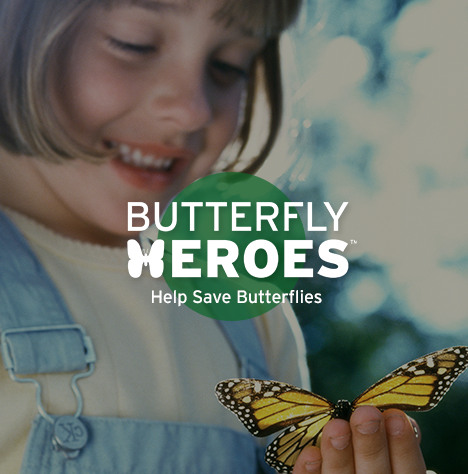 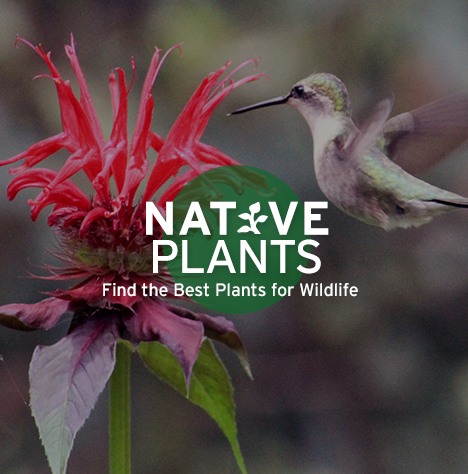