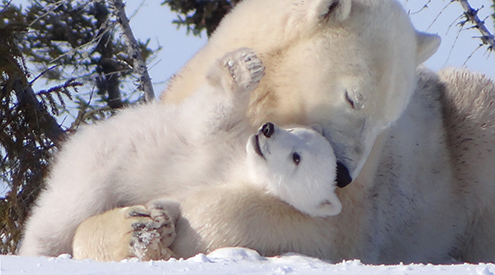 WASHINGTON, D.C. — The House of Representatives’ vote today to protect the Arctic National Wildlife Refuge should send a clear signal to the White House that this incredible wildlife habitat and unique heritage landscape should not be sacrificed in the name of “energy dominance.”

"Nearly 60 years ago, President Dwight Eisenhower protected the majestic Arctic Refuge, home to porcupine caribou, polar bears and nearly 200 species of migratory birds. The House of Representatives today reaffirmed the simple promise to protect this breathtaking landscape as a refuge for wildlife and people alike — and unspoiled by well pads and pipelines,” said Collin O’Mara, president and CEO of the National Wildlife Federation. “We urge Congress not to allow the Arctic National Wildlife Refuge to become the latest casualty of the Administration’s unfettered pursuit of ‘energy dominance’ and instead conserve this essential wildlife habitat for generations to come.”

Members of the indigenous Gwich’in Nation make their home near the migratory route of the porcupine caribou and have depended on the herd for their subsistence and culture for thousands of years. They strongly oppose reckless oil and gas development, which will threaten the Gwich’in way of life.

The Arctic Refuge also supports a great variety of wildlife and plant species. In addition to the caribou, and migrating birds, the refuge is home to Dall sheep, arctic foxes and musk oxen. Nearly 80 percent of the refuge coastal plain has been designated as critical habitat for imperiled polar bears. Oil and gas development could forever damage this essential habitat.

The rush to exploit these lands for energy development has little support from the public. By an overwhelming majority, Americans have said they want to see the Arctic Refuge, its wildlife populations and cultural heritage protected.