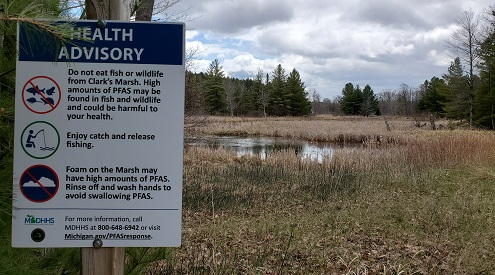 OSCODA, Mich. - Oscoda residents and PFAS activists today held a press conference on the shores of Van Etten Lake to set the record straight on the Air Force’s contamination of their community from the former Wurtsmith Air Force Base. As part of their press conference, they released a new report titled, “PFAS Contamination at the Former Wurtsmith Air Force Base: The True Story,” which provides a comprehensive overview of the Air Force’s mishandling of PFAS contamination in Oscoda and the lack of accountability from the state of Michigan.

The full report can be found here.

“Our community has been devastated by PFAS contamination. Our economy, our tourism, our beautiful natural resources, and most of all our health have been impacted. The only response from the Air Force is we are investigating. Years and years, and they are still investigating,” said Cathy Wusterbarth, member of Need Our Water, (NOW), Oscoda. “The report we are releasing today highlights what must change in order to rebuild trust with the Oscoda community and to see meaningful action on PFAS clean up. The history is long, and we are overdue for real action from the Air Force.”

The press conference took place ahead of a screening at the Shoreline Players Community Theater in Oscoda of the award-winning documentary “No Defense: The U.S. Military’s War on Water.” Oscoda is a central focus in the documentary, which tells the story of people impacted by PFAS contamination from U.S. military operations across the country.

"The Air Force's handling of PFAS in Oscoda is based on a foundation of lies, secrecy and abuse.  And Michigan bureaucrats have too often stood by and watched, as our community suffered," said Tony Spaniola, Oscoda homeowner and co-chair of the Great Lakes PFAS Action Network.  "To head down a new path, we must start with the truth, set the record straight, and demand honest action from the Air Force and state agencies. And that's why this report, and the No Defense film documentary, are so vitally important."

Since the discovery of PFAS, the U.S. Air Force has dragged its feet at virtually every juncture, refusing to implement basic, commonsense protections for water in Oscoda and calling for endless investigations to sidestep actual action. The state of Michigan has also come up short in holding the U.S. Air Force accountable for its inaction. The new report breaks down each opportunity the Air Force had starting in the 1970s up until today, providing insights on what the Air Force and state of Michigan should have done at each decision point.

“Oscoda township is taking on $3 million in debt to extend water mains and hook up customers in areas of concern for PFAS,” said Bill Palmer, Oscoda Township Trustee. “If the Air Force were to accept the Michigan Maximum Contaminant Limits for PFAS that have been established, they would be required to pay for these costs.”

On Thursday, Aug. 26, Need Our Water (NOW), Oscoda along with partners will host a webinar for an update on the latest actions related to the U.S. Air Force and how citizens can engage. Those interested in joining the webinar can register here.

“While I may live on the other side of the state and the events are a bit different, my community of Belmont has a lot in common with Oscoda,” said Sandy Wynn-Stelt, co-chair of the Great Lakes PFAS Action Network and resident of Belmont Michigan near the site of PFAS contamination from Wolverine World Wide. “Both communities have been contaminated with a forever chemical and we have some simple things we expect. We expect clean water for the community, we expect to have the polluters held accountable and clean up their mess. And we expect our elected officials, both federal and state, to address this issue. When communities stand together, our voices are amplified, and we can’t be ignored.”

“We’ve joined together with the Oscoda community to set the record straight with the cold hard facts of what has, and has not, been done by the Air Force and the State of Michigan to clean up PFAS contamination in Oscoda to date,” said Jennifer Hill, associate director for National Wildlife Federation’s Great Lakes Regional Center. This report is a tangible example of the recent findings of the Department of Defense’s own Inspector General – highlighting the same themes – that the DoD’s inaction is putting people and the environment at un-necessary risk from PFAS contamination.”