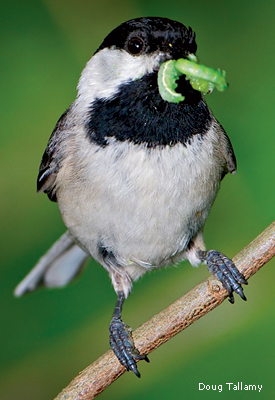 WITH SIX HUNGRY HATCHLINGS BEGGING FOR FOOD, the Carolina chickadee needed to find some nourishment fast. A female known to scientists as “Aluminum/Green, Hot Pink,” the bird flew from her cavity nest to forage in the treetops for caterpillars and other insects. Surprisingly, she bypassed nearly a dozen leafy gingko and crape myrtle trees located a few hundred yards from her nest. Instead, the bird made a beeline to a willow oak on a busy street half a city block away.

Apparently, she knew what she was doing. “Native trees such as oak produce more insect prey than do non-native species such as crape myrtle and gingko,” biologist Jasmine Rajbhandary told me as we raced behind the tiny bird. An intern for the Smithsonian Migratory Bird Center (SMBC), Rajbhandary works with Desiree Narango, a doctoral student with the University of Delaware and SMBC who is conducting a three-year study to learn how nonnative, or exotic, trees in cities and suburbs affect the availability of food birds need during the breeding season.

“We’re focusing on the chickadee because it’s a common backyard species that, like most birds, feeds insects to its young,” Narango says. Because chickadees are cavity nesters, and tree cavities are limited, it’s also easy to get them to build nests in inexpensive PVC-pipe birdhouses that mimic natural cavities. Last March, Narango installed one of these houses in my backyard in Washington, D.C.—providing me a rare opportunity to observe field biologists at work without having to leave home.

Habitats For People and Wildlife

How birds and other wildlife fare in yards like mine is becoming increasingly important. With more than half the global population living in metropolitan areas today—projected to increase to more than 70 percent by 2050—cities and suburbs are gobbling up much of what is left of the world’s natural areas. When it comes to conserving biodiversity, “we can no longer afford to ignore the places we live,” says ornithologist Peter Marra, SMBC’s head and one of Narango’s advisors. “We have to figure out how to manage our urban habitats so they work both for people and for wildlife.”

One of the biggest—yet least recognized—impacts humans are having on urban habitats is a change in vegetation from predominantly native to nonnative species. “Here in North America, about 80 percent of suburbia is landscaped with plants from Asia,” says Doug Tallamy, an entomologist at the University of Delaware and Narango’s co-advisor. He argues that when nonnative plants replace natives, entire food webs are disrupted by the loss of specialized plant-eating insects—the most important food for animals ranging from other insects and spiders to reptiles and amphibians to mammals and birds.

Contrary to what many people believe, “birds do not reproduce on berries and seeds,” Tallamy says. “Ninety-six percent of terrestrial birds rear their young on insects.” Because native insects did not evolve with nonnative plants, most lack the ability to overcome the plants’ chemical defenses and cannot eat them.

Caterpillars, a particularly important food for breeding birds, tend to be among the most specialized groups of all. According to Tallamy, more than 90 percent of butterfly and moth larvae eat only particular plants or groups of plants. Monarch butterfly caterpillars, for example, exclusively eat milkweed leaves—and monarchs are not alone in being so highly specialized. Evolving the ability to feed on a radically new host would take an insect species tens of thousands of years, he says. 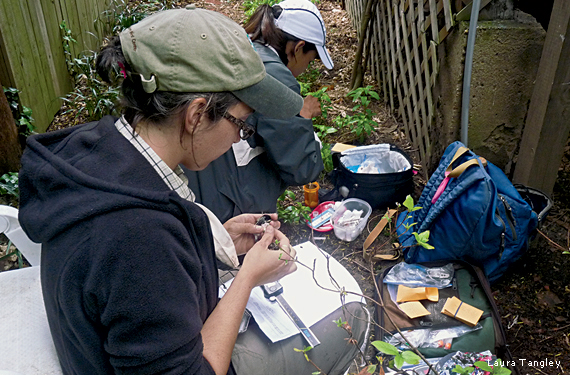 To convince homeowners to cultivate more bird-friendly natives, Tallamy says, “we first need to put numbers on the consequences of landscaping with nonnative plants.” Two years ago, he and Marra received a National Science Foundation grant to do just that and found an eager participant in Narango. Working through the Smithsonian’s Neighborhood Nestwatch program—a 13-year-old, citizen-science effort—Narango installed more than 100 nest boxes during the 2013 and 2014 breeding seasons in backyards in and around Washington, D.C. At each site, she asked homeowners to observe the boxes for nesting activity and to record all observations on the project’s website. In yards where chickadee pairs became active, Narango and Rajbhandary (above) quantified the amount of native and nonnative woody vegetation within each pair’s territory and measured the abundance of caterpillars and other insects feeding on the plants. 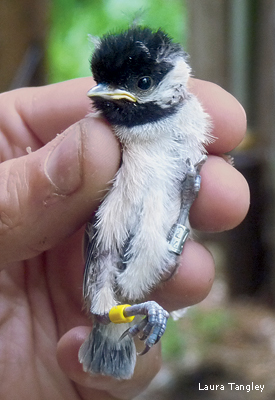 In 2014, chickadees built nests in 55 out of 101 yards. At about half those sites, Narango’s team conducted more extensive research, including mist netting and color banding adults, measuring nestling growth and video recording adults feeding their offspring. (The female in my yard was named for her green and hot-pink leg bands.) Color banding (yellow band on chick, right) allowed the researchers to identify individuals from a distance so they could follow the birds and record where they foraged. Because chickadees are “synchronous nesters”—with mating, egg laying, hatching and fledging all happening at about the same time during the April-to-June breeding season—“the birds keep us pretty busy for a few months,” Narango says.

With another season of fieldwork to go—along with hundreds of hours of data analysis—Narango’s results so far are preliminary. Nonetheless, “some interesting patterns are emerging that are consistent with our predictions,” Marra says. For one thing, the researchers have found that chickadees are more likely to set up territories and nest in yards dominated by native plants. “If more than half your vegetation is native, there’s an excellent chance you will get chickadees,” Narango says. “If you have a lot of trees that are not native, to the birds it’s almost like there are no trees at all.”

The team also discovered that “chickadees indeed prefer to forage on native rather than nonnative trees—overwhelmingly so,” Narango says. (Map below shows the amount of time the birds spent foraging in different tree species in and around my yard. Ignoring nonnatives close to the nest—yellow star—chickadees preferred to fly farther to natives such as American elm, black cherry and several oak species.)

When the researchers sampled insect prey on the trees, they found approximately the same overall number on native and exotic species, but the number and diversity of caterpillars was lower on exotics. “Nonnative trees may support insects, but they do not support the insects that birds want and need to feed their young,” Narango says. 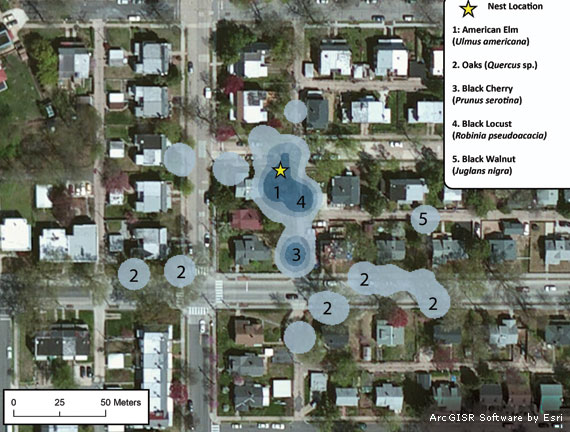 After this year’s season ends in June, Narango plans to complete her data analysis, which should reveal how chickadee reproductive success and nestling growth correlate with native versus nonnative trees. Once the data are in and published, Tallamy says, “we hope people will begin to think more about birds when they make landscaping decisions.”

Even without these data, watching Aluminum/Green, Hot Pink and her mate forage in my yard already has me convinced. Beyond chickadees and other resident birds, Narango’s team recorded a dizzying array of insect-dependent migrants—from scarlet tanagers to warbling vireos to black-and-white warblers—passing through my neighborhood on their way to breeding grounds. To provide the insect prey these birds need, my gardening chores this spring may include a new task: removing a few crape myrtle trees and replacing them with natives.

As part of their research, Narango and her colleagues filmed a subset of their nests for six-hour periods twice during the breeding season to record what chickadees were feeding their offspring. The result was hundreds of hours of video that the biologists still are analyzing. Below is a short clip from one film that shows a red-banded male bird bringing a green caterpillar to his nestlings and removing a fecal sac.

NWF’s Garden for Wildlife™ program provides gardeners with tips about native plants and other elements needed to create nurturing habitats for birds and other wildlife.