Dolphin Memory Rivals That of Humans 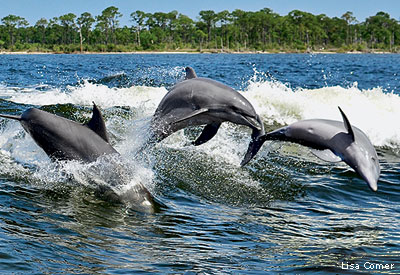 CAPTIVE BOTTLENOSE DOLPHINS can recognize their old tank mates’ whistles after being separated for more than 20 years—the longest social memory ever recorded for a nonhuman species. “This shows us an animal operating cognitively at a level that’s very consistent with human social memory,” says Jason Bruck, who conducted a study of the dolphins, published in the Proceedings of the Royal Society of London B, while finishing a Ph.D. at the University of Chicago.

To establish how well dolphins could remember their former companions, Bruck collected data from 43 different bottlenose dolphins at six facilities that were part of a breeding consortium that has rotated dolphins and kept records for decades on which lived together. Each dolphin develops its own unique signature whistle that appears to function as a name: A dolphin can learn and repeat signatures belonging to other individuals and answer when another dolphin mimics its unique call. Bruck played recordings of signature whistles to dolphins that had once lived with the animals that made the calls. In one notable case, a female bottlenose responded to the call of a dolphin she had not had contact with for more than 20 years, which is the average life expectancy for wild bottlenose dolphins, leading Bruck to conclude that the animals maintain lifelong memories of one another’s whistles.
Help protect wildlife and wild places. Support NWF today! >>