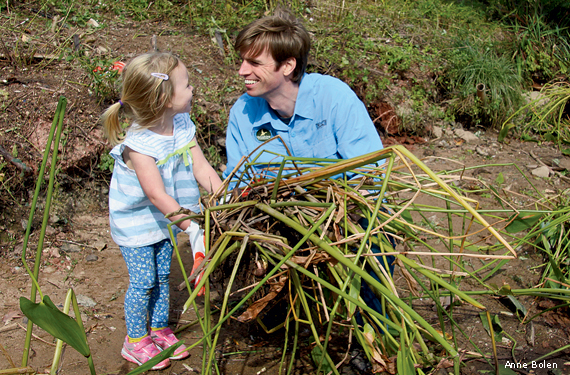 LAST OCTOBER MARKED THE SECOND ANNIVERSARY of Hurricane Sandy, which affected much of the northeast coast of the United States. While most of the coverage rightly focused on the devastating impacts of the storm on local communities, there were equally significant impacts on wildlife habitats and species, including shorebirds, marine mammals and turtles. Here and across the globe, wildlife is increasingly at risk from extreme weather events. Fortunately, the best solutions for wildlife will also help protect people and communities.

Today there are policy reforms and innovative approaches to improving resilience that will not only help protect wildlife but also reduce community risks from extreme storms and floods and minimize taxpayer expense for storm recovery—all in ways that enhance critical wildlife habitat and other natural resources.

This isn’t just theory: The National Wildlife Federation and several of our state affiliates and other partners are engaged in a range of coastal resilience projects in collaboration with the U.S. Department of the Interior and the National Fish and Wildlife Foundation. These projects are demonstrating a more effective and wildlife-friendly approach to storm preparedness.

Science and Policy Are Key
Our work always starts with sound science and policy. In the past several months, the Federation has released two reports that make the case for how best to improve the resilience of wildlife habitat and communities. The first, Climate-Smart Conservation: Putting Adaptation Principles into Practice—published in collaboration with several federal and state natural-resource agencies—offers guidance for designing and implementing conservation projects that make ecosystems more resilient in the face of climate change.

In addition, we recently released a report, Natural Defenses from Hurricanes and Floods, which lays out both policy recommendations and examples of how maintaining and restoring natural infrastructure—like marshes, floodplains and dune systems—can help protect local communities during extreme weather events.

Better public policy is an essential ingredient to reducing our preparedness deficit, so the Federation is  actively building a large coalition—including major reinsurance companies such as Allied World and RenaissanceRe, conservation organizations, taxpayer groups and state and local governments—to help advocate for a range of policy improvements.

As part of this process, we must work to change federal and state laws and insurance-subsidy programs that unwittingly encourage risky development by privatizing economic benefits while socializing losses. As Ben Franklin once said, “An ounce of prevention is worth a pound of cure.” To that end, this nation should take the following steps toward prevention:

• We should dedicate a much greater portion of federal disaster-relief funds to reducing hazards rather than just repairing damages after the fact.

• To be eligible for assistance in the aftermath of natural disasters, communities should be required to take proactive measures to reduce the risks from future events.

• Congress should strengthen laws that restrict federal subsidies for risky development on some of our most sensitive coastal lands and should make ecological restoration projects a priority in the U.S. Army Corps of Engineers’ budget.

• The administration should finalize U.S. Clean Water Act protections of wetlands and streams, which absorb millions of gallons of floodwater and provide other vital services such as fishery habitat and water purification.

We are making progress. We helped end subsidized flood insurance for vacation homes and so-called severe repetitive loss properties. In addition, the Florida Wildlife Federation, an NWF affiliate, has successfully advocated for statutory changes in state law that we hope to replicate elsewhere.

There is much more still to do. In addition to promoting policy change, we need to ensure that investments in natural infrastructure become the preferred means of defending communities against the dangers of extreme weather wherever possible. Protecting and restoring wetlands, dunes, living shorelines, upland forests and other open spaces provides a host of benefits beyond enhancing fish and wildlife habitat, including flood protection, clean water and increased opportunities for recreation and tourism. Just as Hurricane Sandy showed the growing risk from extreme storms in our changing climate, healthy marshes in New York, New Jersey and Delaware demonstrated how these natural defenses can provide protection from the damage storms can inflict.

A Record of Success
Our Federation has a growing number of natural-infrastructure success stories across the nation. For example, we are working with New Jersey Audubon to assess and restore coastal impoundments, waterways and wetlands to reduce flooding risks and purify water. In Massachusetts, we are bolstering key protective wetland and dune habitat in the Great Marsh.

Farther south, our efforts to reforest longleaf pine in partnership with the Alabama and South Carolina Wildlife Federations are creating more resilient habitat for more than 30 threatened and endangered species, including red-cockaded woodpeckers and indigo snakes. In the Gulf of Mexico, we are working with a wide range of partners—including the Louisiana, Mississippi and Florida Wildlife Federations—to ensure that civil and criminal financial penalties from the 2010 Deepwater Horizon oil spill are used to restore the natural systems that support the Gulf’s abundant fish and wildlife resources and to increase the resiliency of coastal communities that depend on a strong and healthy Gulf Coast.

Last fall, NWF staff joined the Earth Conservation Corps (our District of Columbia affiliate) to help revegetate the banks of the Anacostia River with native plants. And during the next year, in partnership with the National Aquarium (NWF’s Maryland affiliate), we will be developing wildlife habitat in Baltimore and living-shoreline projects along the Chesapeake Bay and its tributaries that stabilize the shore with native plants and their roots instead of concrete.

All of these are meaningful projects that simultaneously improve wildlife habitat, help protect local communities and provide models that can be replicated nationwide.

As we experience more extreme weather, folks across the nation and around the world will increasingly be looking for solutions. By applying cutting-edge science and policy to tangible projects on the ground, the National Wildlife Federation and its affiliates are leading the way toward a more resilient future. We are showing that natural infrastructure can often provide a strong defense for communities and, compared to traditional man-made infrastructure, can be more cost effective, longer lasting and better for wildlife—a true win-win-win all around.