An Arctic fox trails a polar bear across the tundra 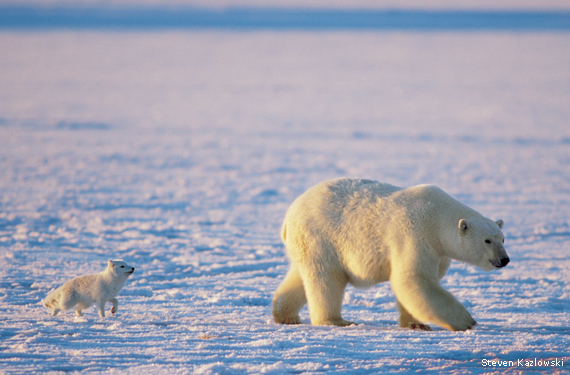 FIELDS OF SEA ICE provide crucial habitat for Arctic wildlife. Polar bears roam the ice to hunt seals and other prey, and Arctic foxes often shadow the bears, hoping to scavenge their kills. “This fox seemed to come out of nowhere and began following in the bear’s footsteps,” says Steven Kazlowski, who photographed the duo in late fall on pack ice along northern Alaska’s Coastal Plain.

Making annual trips to the region for 14 years, Kazlowski has witnessed the effects of climate change firsthand. “The ice is now forming almost a month later than it did years ago,” he says, “and that has serious ramifications for both species.”
Support NWF's Work to Protect Wildlife >>