After 131 years, bison return to the Wind River Reservation in Wyoming, helping restore an ecosystem—and heal the past 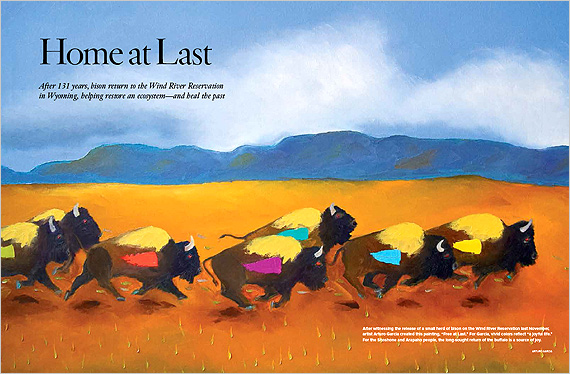 After witnessing the release of a small herd of bison on the Wind River Reservation last November, artist Arturo Garcia created this painting, “Free at Last.” For Garcia, vivid colors reflect “a joyful life.” For the Shoshone and Arapaho people, the long-sought return of the buffalo is a source of joy.

On MAY 3, 2017, a newborn male bison entered the world on the Wind River Reservation in Wyoming, a historic event signaling the rebirth of an iconic species on these tribal lands—and of the Eastern Shoshone and Northern Arapaho people who share them.

Jason Baldes, the Eastern Shoshone’s bison representative and executive director of the Wind River Native Advocacy Center, expressed the profound gratitude of his people for this new life, the first birth of a bison on the reservation in more than 130 years. “The birth of the calf is an honor bestowed upon us by the Creator,” he says, “an homage to what we are doing to bring buffalo back to our lands and culture.”

The birth was also the joyful culmination of a decades-long effort to restore bison—known as buffalo to Native American people—to the Wind River Reservation. The long-awaited homecoming finally occurred last November, when a herd of 10 genetically pure bison imported from the Neal Smith National Wildlife Refuge in Iowa arrived at Wind River—the first time bison hooves had touched these grounds since 1885.

A crowd of some 250 people gathered to witness the historic event. After reverent prayers, songs and speeches, a holding-pen door swung wide. Drummers and singers urged the animals to seek their freedom. Finally taking the cue, the small herd burst from the corral, the distinct sound of hoof beats mingling with cheers. Like celebrities graciously giving the paparazzi a chance for the money shot, the bison paused on the crest of a hill, some turning toward the cameras. They then galloped down the hillside to explore their new home.

Witnessing the event, National Wildlife Federation President and CEO Collin O’Mara expressed the hope of many, saying, “I think what we’re doing here today can actually create a ripple effect that spreads throughout the American West and hopefully beyond.” 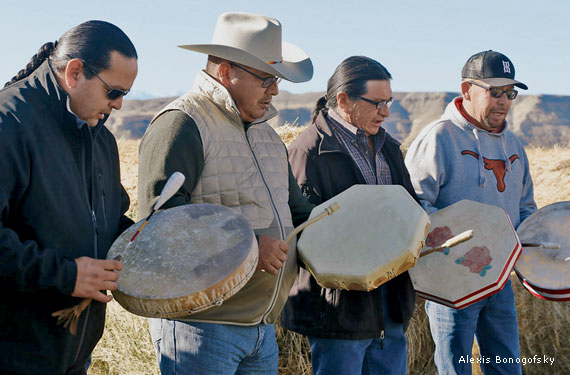 Jason Baldes (left) and others from the Eastern Shoshone Tribe honor the release of bison on the Wind River Reservation. “We were expressing to the buffalo that we love them,” says Baldes.

The seeds of this homecoming—called Boy-zshan Bi-den, or Buffalo Return in the Shoshone language—took root more than 40 years ago, and for Baldes, it has been a family affair. His father, Dick Baldes, was a U.S. Fish and Wildlife Service (FWS) biologist who had labored to rebuild the reservation’s populations of major game species by pushing for a game code that would regulate hunting to sustain populations. Approved in 1984 by the Eastern Shoshone and the Northern Arapaho tribes—historic enemies that today share the Wind River reservation—the new code led to recovery of six of the seven major game species that had once roamed reservation lands, including elk, pronghorn, bighorn sheep, moose, mule deer and white-tailed deer. Yet the buffalo remained painfully absent—a reminder of a bitter past.

Once numbering in the tens of millions across the U.S. West, buffalo were crucial to Native American culture, religion and survival, providing food, hides for clothes and shelter, bones for tools and weapons, fat for soap, and spiritual sustenance. But as settlers, railroads and the U.S. military expanded westward, widespread slaughter of bison for hides and meat—as well as to subjugate tribes and lay claim to their lands—pushed bison to the edge of extinction.

By some estimates, at the end of the 19th century fewer than 100 bison were known to remain in the wild, primarily in Yellowstone National Park and other isolated patches. “What happened to the buffalo similarly happened to us,” Jason Baldes says. “Buffalo were isolated on former pockets of their territory, as are we.” 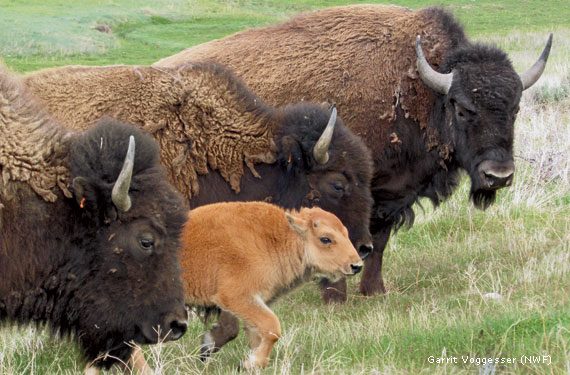 Just 12 days old, a male bison calf roams with its mother (center) and other protective members of the Wind River herd. A Shoshone elk-hide painting (c. 1900, below) depicts a buffalo hunt, a sacred rite for native peoples.

Some native peoples and private ranchers saved survivors from the once vast herds. In the late 1800s, members of the Salish and Kootenai tribes, for example, seeded a herd in northwest Montana on lands that today are part of the National Bison Range, established in 1908 to help bison recover from what Baldes calls the “annihilation” of a species.

Over time, however, growing numbers of bison in private herds interbred with cattle and lost the genetic purity of free-ranging herds. Yellowstone held the largest pool of genetically pure bison, but animals that roamed beyond park boundaries were usually shot out of fear they might transmit brucellosis, a disease that causes cattle to abort fetuses (though no such transmission from bison to cattle has been documented in the wild). 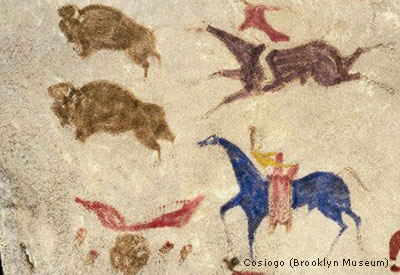 In his effort to save bison and restore them to tribal lands, Dick Baldes gained an important ally in Tom Dougherty, who headed the Wyoming Wildlife Federation, an NWF affiliate, and later led NWF’s Rocky Mountain Regional Center. Stressing the need for collaboration, Dougherty started the Federation’s Tribal Partnerships program. Leaders of NWF passed a resolution to support bison restoration, and Baldes became the first Native American member of the Federation’s board of directors.

Together with the nonprofit InterTribal Buffalo Council, these partners advocated quarantining genetically pure bison that leave Yellowstone National Park, holding them at facilities until cleared of brucellosis, then relocating them to tribal lands. These efforts eventually led to the transfer of bison to the Fort Peck and Fort Belknap reservations in Montana, starting with a herd of 61 bison returned to the Sioux and Assiniboine tribes of Fort Peck in 2012. Though vastly larger in size, Wind River was still waiting. 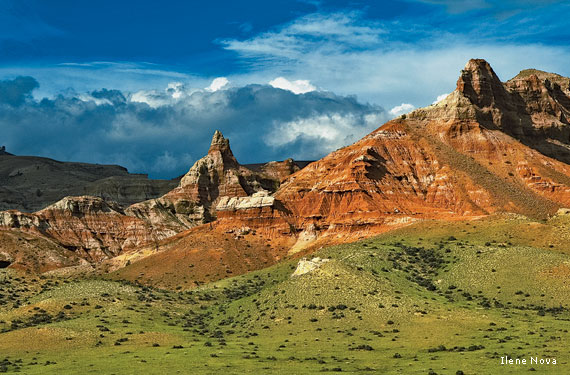 Framed by dramatic peaks, the Wind River Reservation has more than 2.2 million acres of prime wildlife terrain. Bison benefit these grasslands by churning and fertilizing soil and wallowing (below), which creates depressions that hold water.

Tailor-made to sustain a bison herd, the Wind River Reservation has more than 2.2 million acres of sweeping grasslands, mountains and valleys, making it roughly the same size as Yellowstone—and far less crowded. “There isn’t any land that’s any better for bison than right here,” says Dick Baldes.

These lands will become healthier as the new bison herd expands over time. Once the dominant mammal on North American prairies, bison graze in patches, churning and fertilizing soil as they move, a pattern that prevents overgrazing and stimulates the growth of forbs and grasses. Such grazing “is, like fire, an ecological ‘driver’ without which grasslands cannot be sustained,” writes Oklahoma State University ecologist James Shaw. 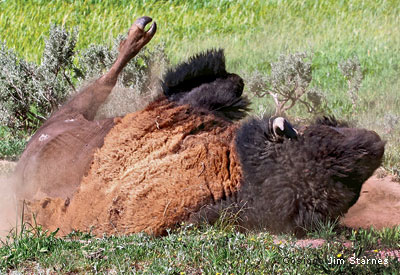 Bison also roll on the ground, or wallow, to get rid of flies or molted tufts of fur. This leaves large depressions in the earth that can hold water from rain or snowmelt, creating microhabitats for water-dependent grasses, amphibians and other wildlife. And unlike cattle, bison do not trample riparian areas, leaving these critical habitats intact. A study by National Science Foundation ecologist Scott Collins, published in Science, even found that a loss of grassland species diversity can be reversed by the grazing of herbivorous mammals such as bison.

Research by FWS is bearing this out, with evidence that mountain plovers, ferruginous hawks and burrowing owls all benefit from the presence of bison. And today, five years after bison were restored to Montana’s Fort Peck Reservation, its game and fish director, Robbie Magnan, reports an increase in “songbirds, wildflowers and different species of native grasses.” 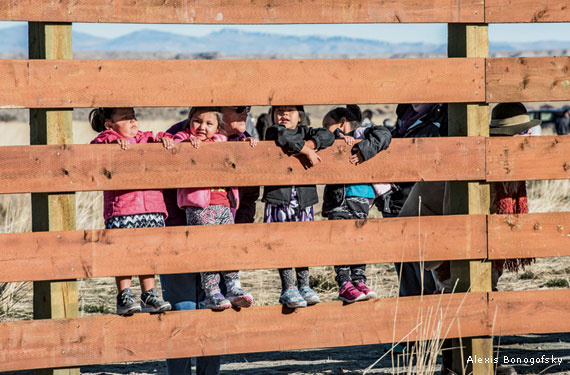 Glimpsing their future, Shoshone and Arapaho children from reservation schools witness the bison release last fall. As the herd grows, so will the chance that buffalo will again feed the bodies and souls of a people.

People on the Wind River Reservation hope to see the same changes as their herd expands over time to a projected 1,000 animals. Some hope the buffalo will also heal old fractures between the two tribes that now share the land. At the release last November, “seeing Eastern Shoshone and Northern Arapahoe schoolchildren come in by the busloads to be a part of history, it hit home that wildlife and people are inextricably linked,” says Brian Kurzel, now head of NWF’s Rocky Mountain Regional Center.

Jason Baldes feels the connection more deeply than most. “Having bison on the Wind River is like having a family member that’s been gone for a long, long time, that you’ve missed, and is now home again. To restore a connection to buffalo is a way to be able to heal the past. It’s a way to help us heal as native people.”

“The National Wildlife Federation has a big vision for buffalo in the West,” says Garrit Voggesser, director of NWF’s Tribal Partnerships. In addition to helping restore bison to the Wind River Reservation in Wyoming, the Federation has partnered with tribes and conservation groups to transfer bison from Yellowstone to the Fort Peck and Fort Belknap reservations in Montana. Working with the U.S. Fish and Wildlife Service, NWF is also leading efforts to return bison to the 1.1-million-acre Charles M. Russell National Wildlife Refuge in Montana, in part by paying ranchers to retire grazing leases on public lands.