How an urban rookery in California stirs both distress and delight 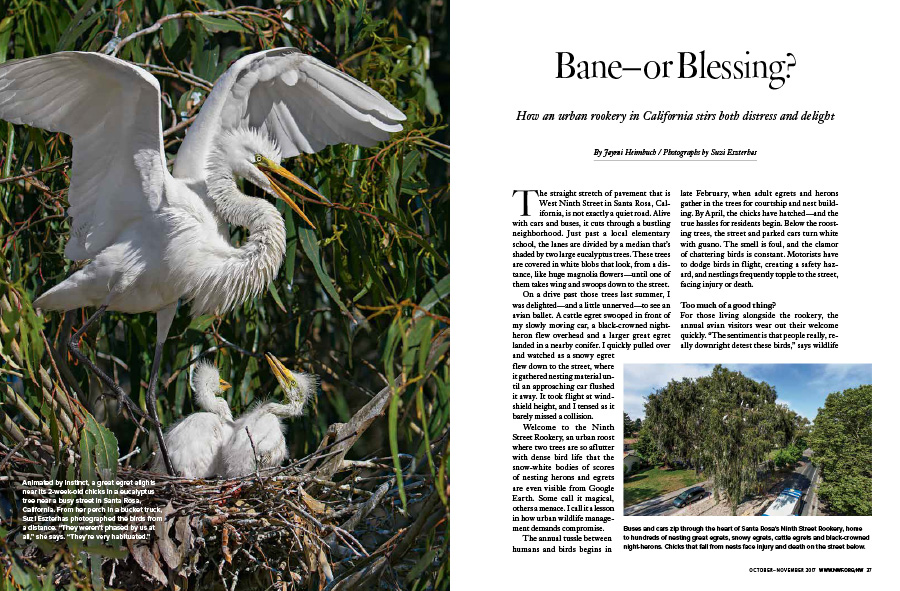 Animated by instinct, a great egret alights near its 2-week-old chicks in a eucalyptus tree near a busy street in Santa Rosa, California (above, left). From her perch in a bucket truck, Suzi Eszterhas photographed the birds from a distance. “They weren’t fazed by us at all,” she says. “They’re very habituated.” Buses and cars zip through the heart of Santa Rosa’s Ninth Street Rookery (above, right), home to hundreds of nesting great egrets, snowy egrets, cattle egrets and black-crowned night-herons. Chicks that fall from nests face injury and death on the street below.

THE STRAIGHT STRETCH of pavement that is West Ninth Street in Santa Rosa, California, is not exactly a quiet road. Alive with cars and buses, it cuts through a bustling neighborhood. Just past a local elementary school, the lanes are divided by a median that’s shaded by two large eucalyptus trees. These trees are covered in white blobs that look, from a distance, like huge magnolia flowers—until one of them takes wing and swoops down to the street.

On a drive past those trees last summer, I was delighted—and a little unnerved—to see an avian ballet. A cattle egret swooped in front of my slowly moving car, a black-crowned night-heron flew overhead and a larger great egret landed in a nearby conifer. I quickly pulled over and watched as a snowy egret flew down to the street, where it gathered nesting material until an approaching car flushed it away. It took flight at windshield height, and I tensed as it barely missed a collision.

Welcome to the Ninth Street Rookery, an urban roost where two trees are so aflutter with dense bird life that the snow-white bodies of scores of nesting herons and egrets are even visible from Google Earth. Some call it magical, others a menace. I call it a lesson in how urban wildlife management demands compromise.

The annual tussle between humans and birds begins in late February, when adult egrets and herons gather in the trees for courtship and nest building. By April, the chicks have hatched—and the true hassles for residents begin. Below the roosting trees, the street and parked cars turn white with guano. The smell is foul, and the clamor of chattering birds is constant. Motorists have to dodge birds in flight, creating a safety hazard, and nestlings frequently topple to the street, facing injury or death. 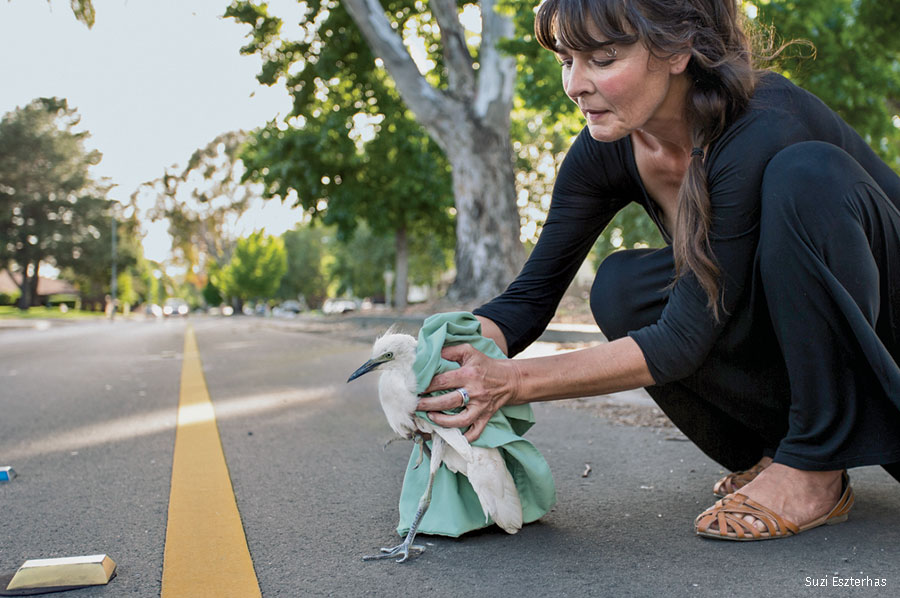 Compassion prompts Santa Rosa resident Birgitta Lewis to rescue a fledgling cattle egret found floundering on the street. Lewis has recruited others to help cart injured birds to a local rescue center, which treats hundreds of chicks a year.

Too much of a good thing?

For those living alongside the rookery, the annual avian visitors wear out their welcome quickly. “The sentiment is that people really, really downright detest these birds,” says wildlife photographer Suzi Eszterhas, who has been documenting the rookery for several seasons. She says people have even put firecrackers at the base of the trees to deter the birds from nesting, but to no avail. The nearby Laguna de Santa Rosa wetland provides ample fish for adult birds to feed their young, so “the birds don’t want to leave,” says Eszterhas. “It’s a good breeding area, except for the fact that the fledglings and the chicks get creamed by the cars.”

Coming to the rescue

That carnage is significant. During chick-rearing and fledging season, siblings push each other from the nest, and awkward chicks testing their wings fall to the ground. Even if only slightly injured from the fall onto hard pavement, those birds are at risk of a car strike. Members of the Madrone Audubon Society of Sonoma County put hay below the trees to soften the fall, but hundreds of young birds are injured or die each season. “It’s just concrete death under them” says Rebecca Duerr, research director and veterinarian with International Bird Rescue (IBR) in Fairfield, California.

The desire to save fallen birds has led to an annual effort by IBR and other bird rescue groups and volunteers. Local resident Birgitta Lewis ran one such rescue operation and enlisted other volunteers to collect injured birds on a daily basis and cart them to Santa Rosa’s Bird Rescue Center. From there, the birds are triaged and transported to IBR, where they receive medical care.

These rescue workers stay busy all season long. Last year, IBR tended to 230 birds needing rescue and rehabilitation from the Ninth Street Rookery. One of the most common injuries is fractured beaks. “I end up having to pin a lot of their mandibles,” says Duerr. “It’s really great to get to fix those babies because they would not be viable individuals if we didn’t.” 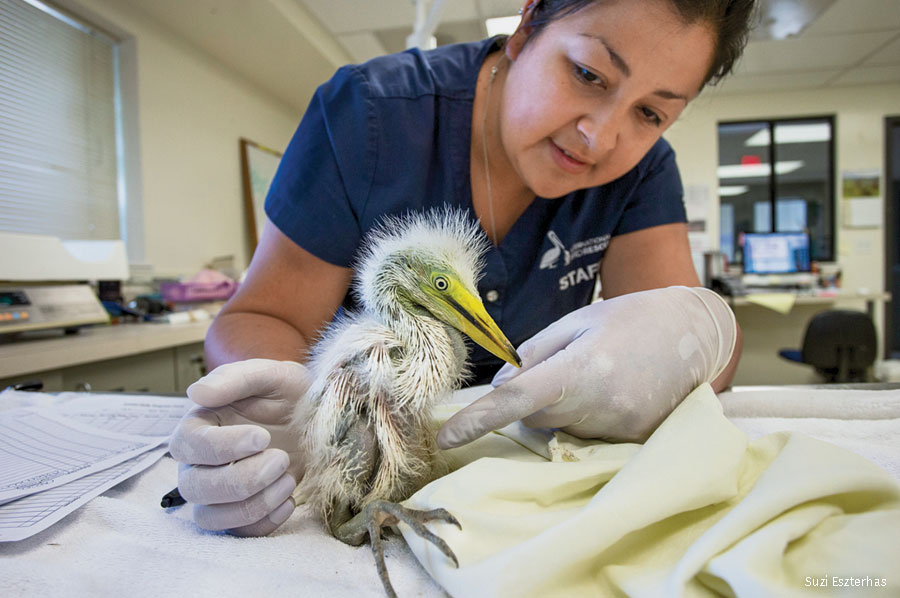 With a tender touch, Isabel Luevano of International Bird Rescue checks the progress of a 1-week-old great egret recovered from the Ninth Street Rookery.

Beyond the threats of hard pavement and passing cars, proximity to human development creates other health hazards for the birds. Every year, some chicks from the rookery show signs of serious metabolic bone disease. The illness is caused by mercury in the food foraged by adults in the nearby wetlands. Duerr says the source of the mercury isn’t clear—it might be from old mines or wastewater runoff after storms—but the chicks are clearly exposed to it through the fish they eat as they’re reared.

“Instead of being strong and rigid, their bones almost feel like they’re made of rubber,” says Isabel Luevano, wildlife center manager for San Francisco Bay’s arm of IBR. “For cases we can work with, we try to give them the proper supplements and nutrients to help them grow stronger bones, but there are times when it’s too late to reverse the damage. For those, we humanely euthanize them.”

After treatment, rehabilitation can take weeks or months before injured birds are ready for release, yet IBR’s track record is impressive. Of the 230 heron and egret chicks brought to IBR last year from the Ninth Street Rookery, 155 were eventually released in Laguna de Santa Rosa. Before release, all injured birds receive red leg bands. Some of those individuals have been documented returning to the rookery in years following release, starting a family in the same trees where they were born.

Is all this effort to rescue urban birds worthwhile? “Some have suggested that those that die are meant to die because they’re not as fit as the ones that survive, but I don’t buy that,” says John Kelly, director of conservation science at Audubon Canyon Ranch in California. Fallen chicks are common in heron colonies. “When prey is less than abundant, the youngest chicks are likely to starve, fall or be pushed from the nest,” says Kelly. “This is nature’s way of matching the food needs of nestlings with the parents’ ability to feed them. Alternatively, a young bird might simply trip and fall but, either way, the presence of fallen chicks has nothing to do with genetic fitness.” 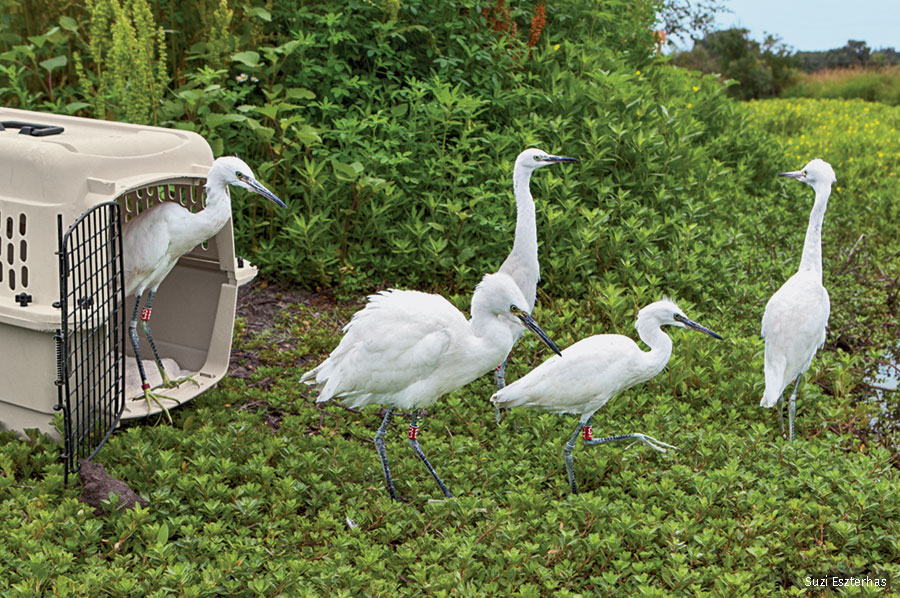 After weeks or months of treatment, birds from the facility are released at Laguna de Santa Rosa. There, some cautious snowy egrets recently found their freedom.

Reaching out to residents

Instead, he says, it has everything to do with luck and circumstance. Given that pollution, habitat loss and other human stressors are causing widespread bird declines, Kelly feels it’s worth saving as many individual birds as possible to offset such losses. “We don’t really know if rescue activity has a population effect or not because it has not been measured,” he says. “But there’s faith that we’re doing a good thing.”

The “good thing” done by those who care deeply about the Ninth Street Rookery goes beyond collecting fallen chicks. It extends to reaching out to residents of the affected neighborhood in hopes that those who loathe the birds might move toward appreciation—and conservation—if given an opportunity to learn more.

To that end, Madrone Audubon organizes Bird Day at Lincoln Elementary School, which is just one block away from the rookery. The annual event celebrates the birds, teaches bird ecology and brings children outside to peer through spotting scopes and see, often for the first time, chicks in the nests and parents tending to their young. For children who don’t normally get a lot of exposure to nature, Bird Day is a special and highly memorable event.

Clearly, the Ninth Street Rookery brings a thriving—if messy—piece of nature into the heart of an urban area. Efforts to help injured birds give them a second chance at life and give children a chance to learn about wildlife. “You can understand how people feel putting up with the noise and the smell,” says Eszterhas. “But the birds are just trying to make a living and raise their families. That’s not that different than what humans are doing down below. By educating the children, it absolutely gives me hope.”

Is This a Heron, Egret or Crane?
Shared Moment: An Egret Bound for the Heavens
National Wildlife archives: Bird of Grace and Trauma
NWF Wildlife Guide: Birds