Mountain caribou are vanishing, but conservationists aren’t giving up 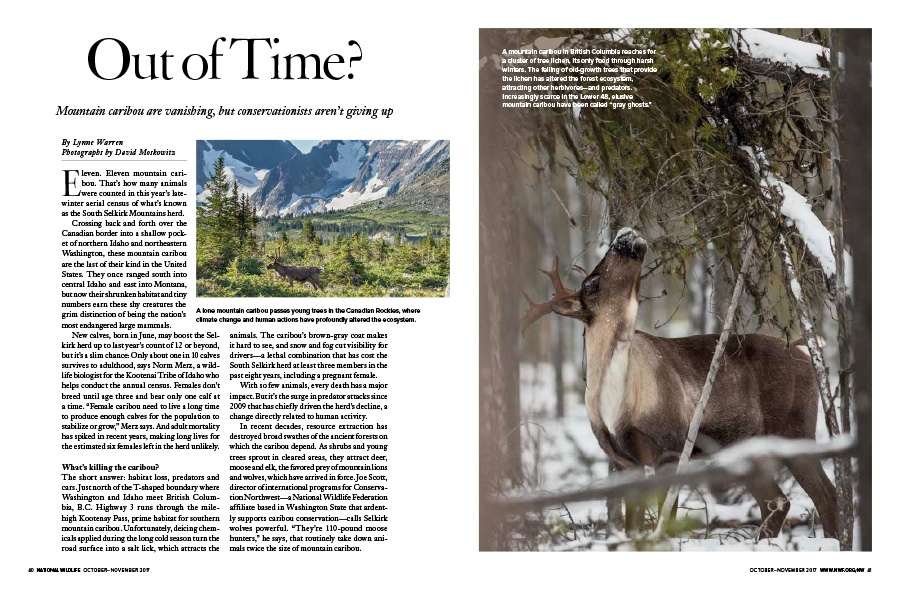 A lone mountain caribou passes young trees in the Canadian Rockies, where climate change and human actions have profoundly altered the ecosystem (above, left). A mountain caribou in British Columbia reaches for a cluster of tree lichen (above, right), its only food through harsh winters. The felling of old-growth trees that provide the lichen has altered the forest ecosystem, attracting other herbivores—and predators. Increasingly scarce in the Lower 48, elusive mountain caribou have been called “gray ghosts."

ELEVEN. Eleven mountain caribou. That’s how many animals were counted in this year’s late-winter aerial census of what’s known as the South Selkirk Mountains herd.

Crossing back and forth over the Canadian border into a shallow pocket of northern Idaho and northeastern Washington, these mountain caribou are the last of their kind in the United States. They once ranged south into central Idaho and east into Montana, but now their shrunken habitat and tiny numbers earn these shy creatures the grim distinction of being the nation’s most endangered large mammals.

New calves, born in June, may boost the Selkirk herd up to last year’s count of 12 or beyond, but it’s a slim chance: Only about one in 10 calves survives to adulthood, says Norm Merz, a wildlife biologist for the Kootenai Tribe of Idaho who helps conduct the annual census. Females don’t breed until age three and bear only one calf at a time. “Female caribou need to live a long time to produce enough calves for the population to stabilize or grow,” Merz says. And adult mortality has spiked in recent years, making long lives for the estimated six females left in the herd unlikely.

The short answer: habitat loss, predators and cars. Just north of the T-shaped boundary where Washington and Idaho meet British Columbia, B.C. Highway 3 runs through the mile-high Kootenay Pass, prime habitat for southern mountain caribou. Unfortunately, deicing chemicals applied during the long cold season turn the road surface into a salt lick, which attracts the animals. The caribou’s brown-gray coat makes it hard to see, and snow and fog cut visibility for drivers—a lethal combination that has cost the South Selkirk herd at least three members in the past eight years, including a pregnant female.

With so few animals, every death has a major impact. But it’s the surge in predator attacks since 2009 that has chiefly driven the herd’s decline, a change directly related to human activity.
In recent decades, resource extraction has destroyed broad swathes of the ancient forests on which the caribou depend. As shrubs and young trees sprout in cleared areas, they attract deer, moose and elk, the favored prey of mountain lions and wolves, which have arrived in force. Joe Scott, director of international programs for Conservation Northwest—a National Wildlife Federation affiliate based in Washington State that ardently supports caribou conservation—calls Selkirk wolves powerful. “They’re 110-pound moose hunters,” he says, that routinely take down animals twice the size of mountain caribou.

Caribou have little defense against this predator invasion. They forage in small groups widely scattered across dense forests and high-altitude meadows. This pattern long made hunting them so difficult that few predators bothered. But roads and clear-cuts created by logging, mining, pipeline construction and oil and gas extraction, along with trails that recreation companies create for snowmobilers and skiers, now provide both wolves and mountain lions with easy paths to a virtual mountain caribou buffet—and the consequences have been devastating.

In some herds, nearly 40 percent of adult mortality has been attributed to wolf attacks in recent years. But according to Scott, predation losses are a by-product of the habitat destruction that put mountain caribou on endangered species lists in both the United States and Canada. “They lived here undisturbed for millennia before we started their descent into oblivion,” he says. Scientists estimate that mountain caribou have disappeared from 60 percent of their historic range on both sides of the border.

That range falls within the inland temperate rain forest, the only temperate rain forest on Earth so far from an ocean. Weather systems blowing in from the Pacific collide with the western side of the Rockies and drop vast amounts of precipitation, mostly snow. Snow piles up as much as 16 feet deep in forests of fir, spruce, red cedar and western hemlock. Here, at elevations above 5,000 feet, mountain caribou are at home. 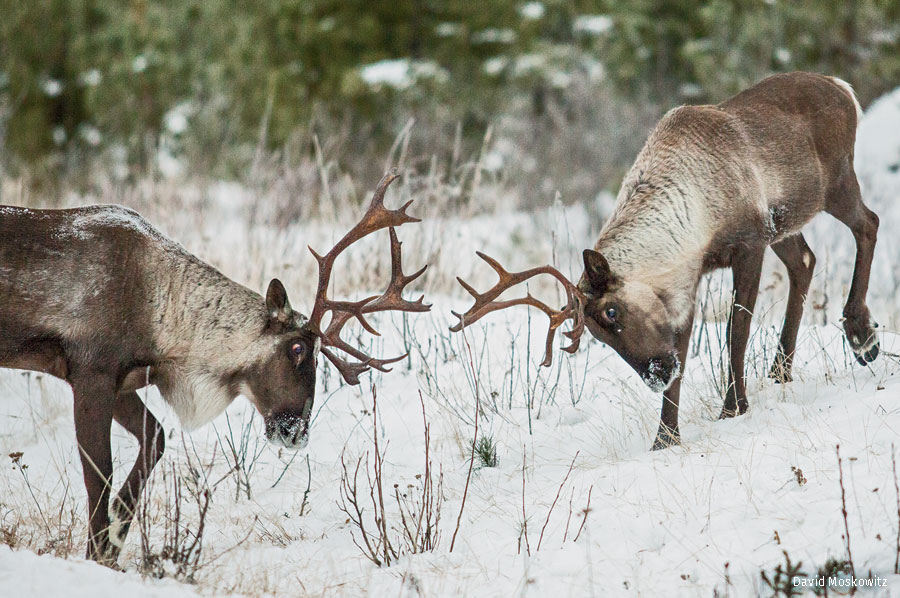 Two southern mountain caribou bulls face off in British Columbia, where photographer David Moskowitz has been documenting the animals. Though predator control and maternal penning aid caribou conservation, “in the long run,” he says, “restoring the forest ecosystem these animals evolved in is their only hope for survival.”

With thick, crimped coats that insulate them from cold, mountain caribou are fine-tuned to thrive in this unique environment. Their short muzzles and tails along with small ears further limit body heat loss, and broad hooves act like snowshoes, allowing the caribou to walk on top of deep snowpack and feed on lichens growing high up in trees.

Old-growth forest is crucial to mountain caribou because only old trees carry the abundant growth of lichens that are the animal’s sole food through long winters. Recent research by Canadian naturalist Trevor Goward shows that after an old-growth stand is cut, it takes lichens some 60 years to become reestablished and decades more for enough lichen mass to accumulate to support healthy herds.

Conserving endangered animals whose habitat takes a century or more to recover after disturbance presents huge challenges—economic and political as well as ecological. “It seems like every town has a lumber mill or a mine and probably snowmobiling and skiing businesses,” says Scott. “All those people are running headlong into the needs of the mountain caribou.”

Conservation groups on both sides of the border are collaborating with each other—as well as with state, provincial and national government bodies, with Kootenai and Kalispel tribal leaders in the United States and with First Nations groups in Canada—to support mountain caribou without undermining local economies.

In 2009, for example, British Columbia closed more than 5 million acres of caribou habitat to logging and road building and imposed restrictions on motorized recreation across 3.7 million acres. In the United States, a 2012 critical-habitat designation enhanced protections for some 30,000 acres within an existing 440,000-acre state and federal caribou recovery area. Yet mountain caribou numbers have continued to fall, and conservationists have turned to more direct action to save the surviving animals. 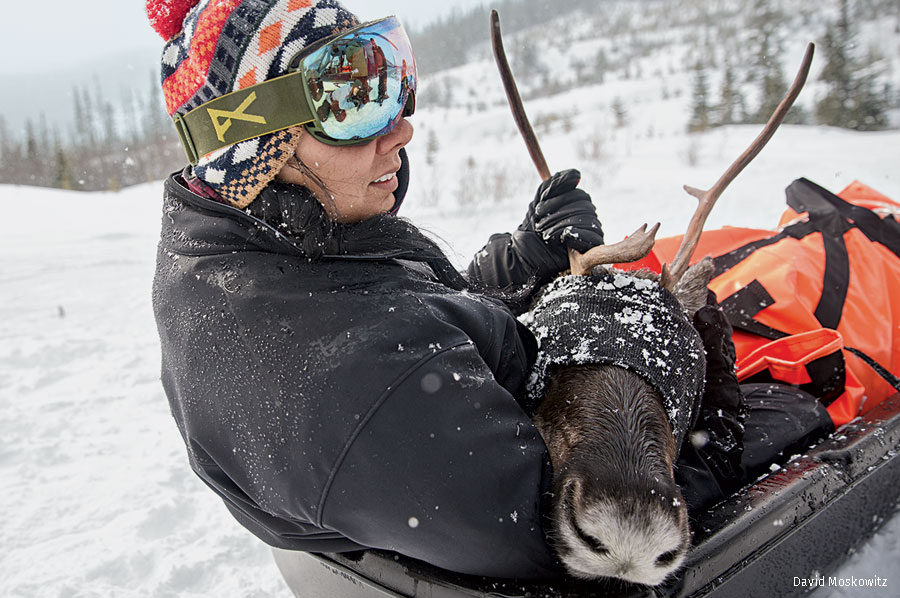 Biologist Naomi Owens helps capture a mountain caribou as part of a joint effort of the West Moberly and Saulteau First Nations to pen pregnant females and protect them and their calves during the first weeks of life.

British Columbia began culling wolves living among caribou herds in the winter of 2015, drawing harsh criticism from some wildlife advocates. In two seasons, 19 wolves were removed from the Selkirk Mountains, and wolf predation in the herd there has fallen. “Scientists say if caribou are to survive, we have to pull all the available conservation levers at once,” says Scott, “and predator control has to be part of that strategy.”

Maternal penning is another lever being pulled. Pregnant females are netted from helicopters, tranquilized and transported to large enclosures, where they spend the last trimester of pregnancy. Through calving and the first weeks of the vulnerable newborns’ lives, mothers and young are fed and protected from predators, then later released to the wild. Multiyear projects in three mountain caribou herds have helped reduce calf mortality and offer promise that herd numbers can be stabilized. The Kootenai Tribe of Idaho, with other tribes and agencies, is now fundraising for a three-year maternal penning effort in the South Selkirk Mountains. Capture and round-the-clock care are labor-intensive and expensive, says Merz, but the tab of $230,000 a year could help save the herd.

It will take both hard work and major investment to restore mountain caribou, but saving them is possible. “There are many species that were once on the brink of extinction that have come back,” Merz says. “Bison. Condors. Black-footed ferrets. It took heavy lifting to save those populations, but they still exist today.” Scott agrees. “As long as there are mountain caribou out there,” he says, “there’s hope.”

Lynne Warren gave readers a whiff of skunks in the April–May 2017 issue. David Moskowitz’s new book on mountain caribou is due for release in 2018.