Whale calves "whisper," one of the largest aerial migrations and more 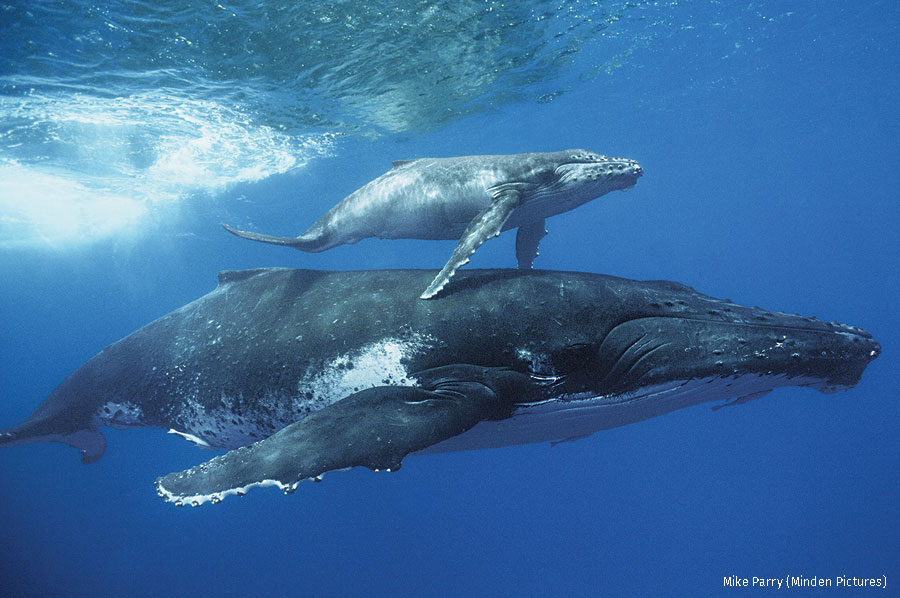 Ecologists from Denmark and Australia have uncovered new details about the first few months of life for humpback whales (above, in Tonga). The researchers attached tags with suction cups to several adult mothers and their newborn calves in Australian waters. The tags, which recorded sounds the whales produced, detached in a couple of days and floated to the surface. Retrieving the tags, the scientists discovered that calves “whisper” to their mothers through intimate grunts and squeaks, presumably to avoid being heard by predatory orcas and aggressive adult male humpbacks seeking mates. “We heard a lot of rubbing sounds, like two balloons being rubbed together, which we think was the calf nudging its mother when it wants to nurse,” says marine biologist Simone Videsen of Denmark’s Aarhus University.

Writing in Functional Ecology, the scientists note that Southern Hemisphere humpback calves must put on as much weight as possible in nursery waters before beginning their long journeys to summer feeding grounds in Antarctica. The study highlights the need to protect whale nurseries from noisy boat traffic that could affect the animals’ communications. 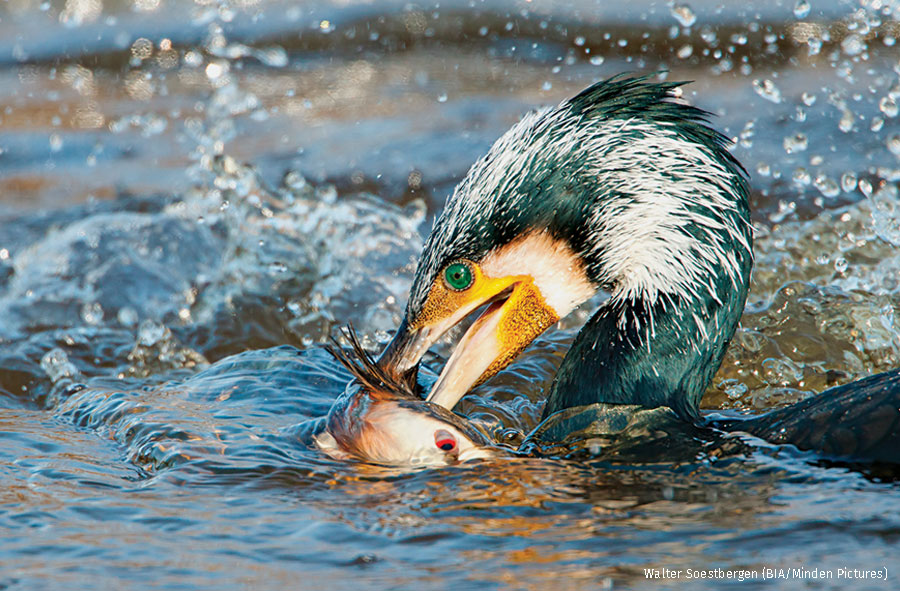 Most biologists have believed that birds rely primarily on visual cues to hunt for fish underwater. But an investigation by marine scientists from the University of Southern Denmark finds for the first time that at least one bird species—the great cormorant (above)—can hear sounds as it dives for food. “Cormorants are visual hunters, but they are just as efficient hunting in turbid and dark waters as in clear waters,” says biologist Kirstin Anderson Hansen, the study’s lead author. In a series of laboratory tests, the scientists observed that the cormorants’ hearing range coincides with the levels of underwater noise produced by two of their primary fish prey, herring and sculpin. Noting that more than 800 bird species feed on underwater resources, the biologists write in The Science of Nature that other aquatic birds also may hear sounds as they dive. 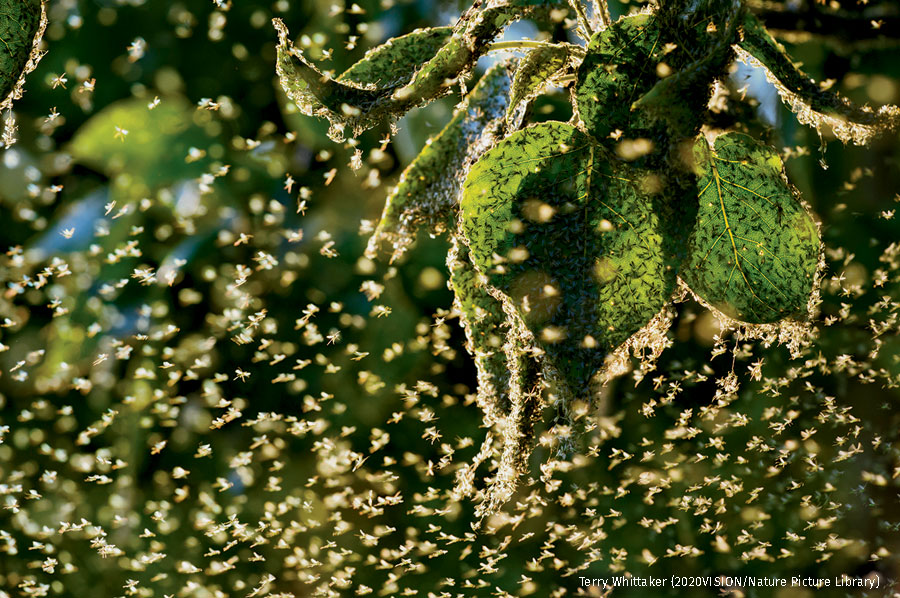 One of Earth’s most massive aerial migrations

In the first quantitative study of its kind, an international team of scientists has documented one of the largest aerial mass migrations on the planet: nearly 3.5 trillion insects (such as the aphids above) flying above southern England every year.

Over a decade, the team used entomological radar equipment to measure body size, flight altitude and other information about the migrating insects, which flew south to Africa in the fall and back north in the spring. Added together, those flying insects represent 3,200 tons of biomass—more than seven times the amount of biomass of the 30 million songbirds that fly annually over the same region.

Reporting in Science, the researchers point out that migrating insect numbers probably are much greater in other parts of the world, particularly in warmer areas. They also say that such mass migrations have significant ecological ramifications. “Insect bodies are rich in nutrients, and the importance of these movements is underappreciated,” says University of Exeter ecologist Jason Chapman. In addition to providing food for birds, many of the insects perform such valuable services as pollination and predation on crop pests. 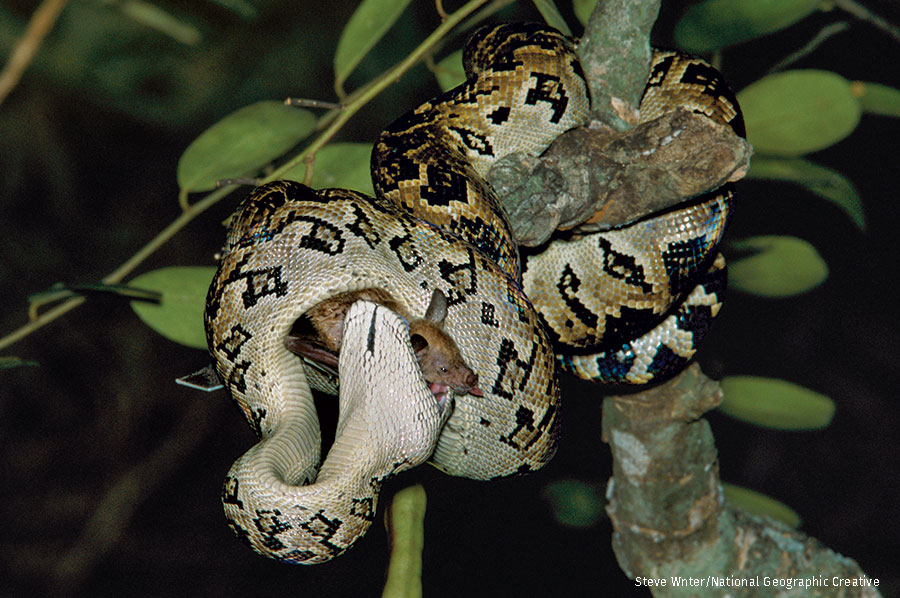 Scientists have observed only a small number of the world’s more than 3,600 snake species catching prey in the wild, and many experts have long assumed that the reptiles are solitary hunters. Now, a new study by University of Tennessee researcher Vladimir Dinets provides the first evidence that some snakes hunt in groups, likely to increase their chances of success.

While investigating the behavior of Cuban boas (above, devouring a bat in Cuba), Dinets noticed that the snakes often hang together from the ceiling around the entrance to bat caves. Apparently coordinating their positions with one another, the boas form a barrier that prevents some of the bats from exiting a cave without being snared by the snakes, which can grow as long as 9 feet. “It is possible that coordinated hunting is not uncommon among snakes,” Dinets writes in Animal Behavior and Cognition, “but it will take a lot of very patient field research to find out.”