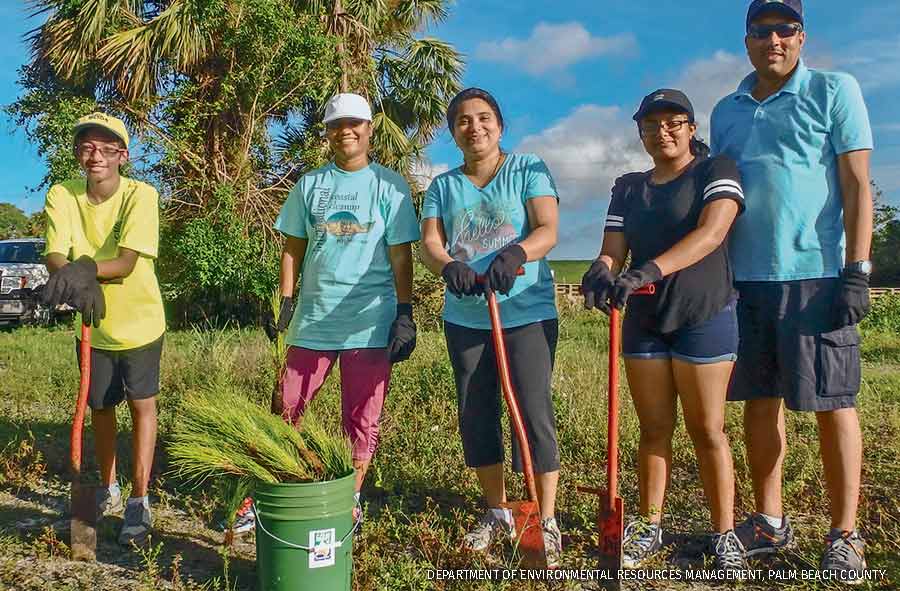 Hurricane Irma mangled thousands of Florida’s trees this past September. NWF’s Trees for Wildlife™ program is helping restore this state’s vital habitat, which is also being depleted by rapid development and agriculture. The program provided 1,000 slash pines that volunteers planted in the Winding Waters Natural Area in October (above). It also donated 3,000 southern red cedar, live oak and slash pine saplings for residents of Collier County, where Irma hit hard. “Planting is such a rebirth,” says Luwana Milner, chair of Keep Collier Beautiful, which distributed the native trees in November. 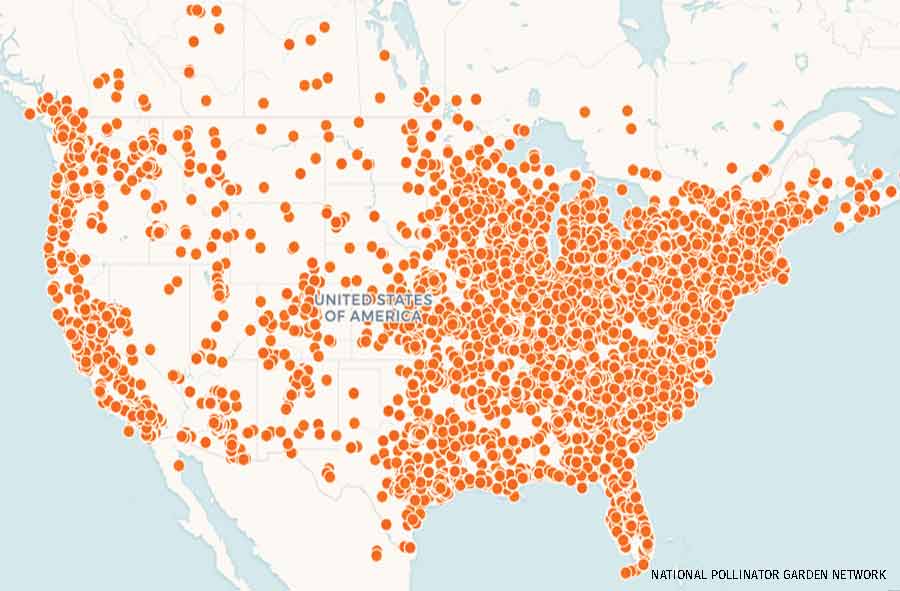 Nearly 700,000 gardeners are now planting for pollinators, thanks to the Million Pollinator Garden Challenge™. The National Pollinator Garden Network™, co-founded by the National Wildlife Federation and eight other organizations, began in 2015 to challenge gardeners, schools, horticulturists and others to grow plants that provide the nectar and pollen that pollinators eat. These bees, butterflies, hummingbirds, bats and other critters fertilize a third of food crops while flying from plant to plant, so they “play a critical role in food security,” says Val Dolcini, president of the Pollinator Partnership, one of the network’s founding organizations.

Individuals, schools and organizations in some 40 countries have put their gardens on an interactive map. But many habitat gaps remain, particularly in the West (see map above). Each NWF certified garden matters, so certify yours (www.nwf.org/certify) and, as the network says, “bee counted.” 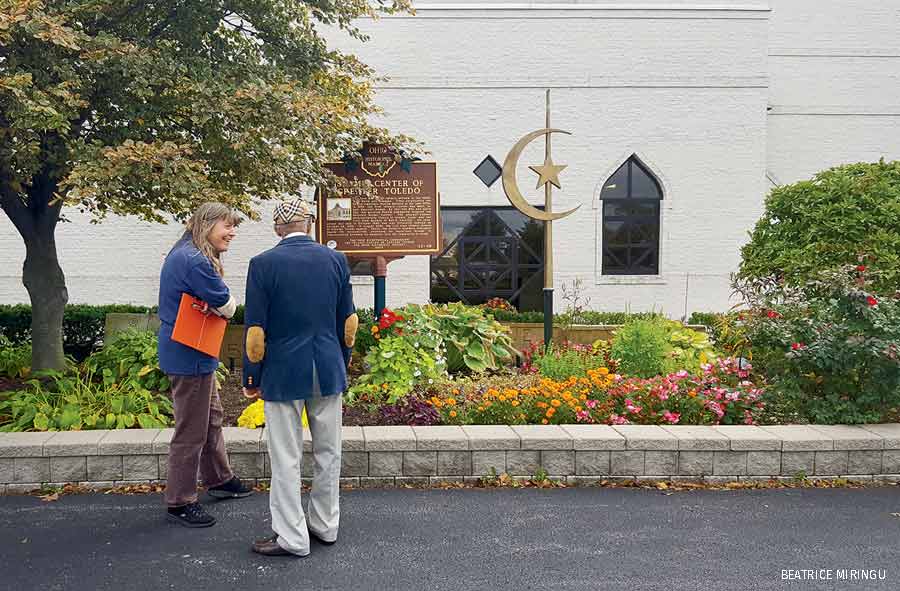 Congregations connect on behalf of wildlife

Sacred Grounds™ has not only taken root, it is blossoming. As part of NWF’s Garden for Wildlife™ program, Sacred Grounds helps congregations fulfill their commitment to environmental stewardship by helping them to create a Certified Wildlife Habitat® and conserve water at their places of worship and beyond. Launched in 2012 with three congregations in the D.C. metropolitan area, the initiative has since held workshops attended by more than 150 congregations in Maryland, and last year, it expanded to include eight congregations in and near Toledo, Ohio.

NWF staff and other gardening experts offered two workshops for Ohio congregations to learn how to design gardens and install and care for native trees, shrubs and other plants. These will provide food and shelter for wildlife and filter stormwater runoff, a significant source of pollution in Ohio’s rivers.

Abdel-Wahab Soliman is a board member of the Islamic Center of Greater Toledo where a workshop was held this past October. He says the program also teaches ongoing environmental stewardship, which is integral to his Muslim faith. “We have to live as part of the landscape to live in peace with ourselves and the environment. These resources belong to all of humanity, not to individuals.”

“As people of faith, we are all called to protect the Earth,” says workshop organizer Marilyn Berry DuFour (above, left) of the Toledo-Lucas County Rain Garden Initiative. “This is common ground.” 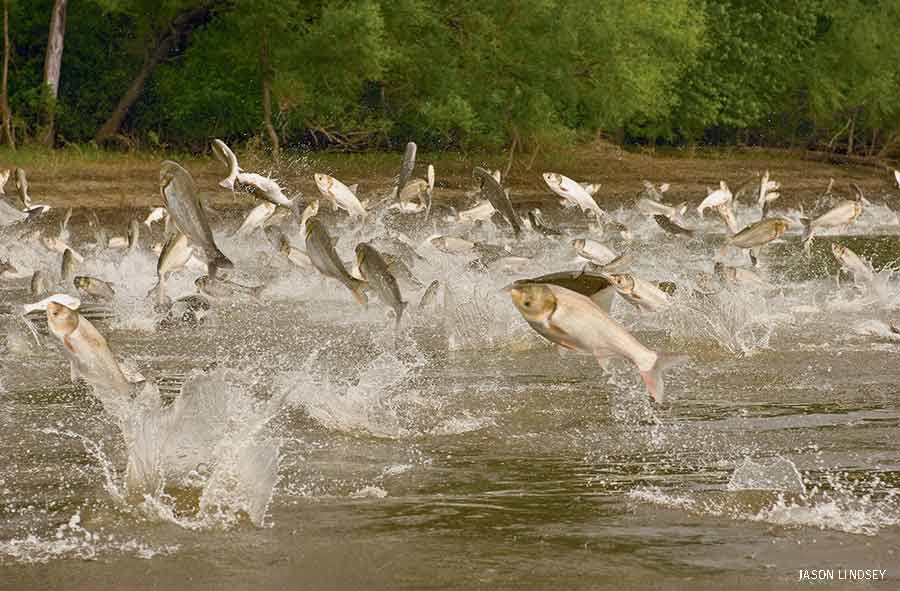 Last June, an angler pulled an Asian carp from Illinois’ Little Calumet River, just 9 miles from Lake Michigan. This fish—which had been found beyond electric exclusion barriers—raised alarm among conservationists. Able to grow up to 100 pounds, these invasive carp also can outcompete native fish and leap out of the water (above), often hitting boaters.

For more than a decade, NWF and other groups have been calling for effective ways to prevent the carp from entering the Great Lakes. After recently renewed cries from NWF, its affiliates and other partners, the U.S. Army Corps of Engineers released a draft plan last August to help keep Asian carp at bay. They hope to build a series of deterrents—electronic shocks, blasting water jets, loud noises and a flushing lock—at the Brandon Road Lock and Dam in Illinois to reduce the chances that the fish could invade the Great Lakes. The final plan is due in August 2019.

The groups say the $275 million estimated cost is far less than the damage these fish could do to the lakes and their $7 billion annual sport fishing industry. “We must close the door to keep Asian carp out of the Great Lakes,” says Marc Smith, NWF Great Lakes director of conservation partnerships. 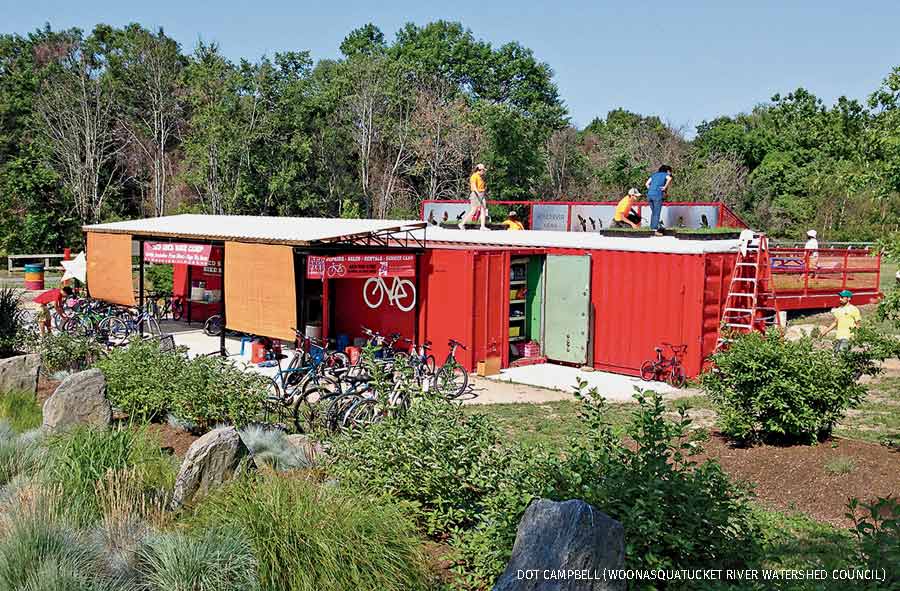 Rhode Island takes the lead in being green

Rhode Island has become a national leader for the environment, thanks in part to the Environmental Council of Rhode Island (ECRI). This NWF affiliate began in 1938 as the Rhode Island Wildlife Federation and was renamed ECRI in 1972. Now this consortium of 62 organizations is working on the ground locally while advancing far-reaching state policies.

With urging from ECRI and other organizations, the state first committed in 2004 to obtaining 3 percent of its energy from renewable sources by 2007, and in 2016, it upped this commitment to as much as 40 percent by 2035. In 2017, ECRI also successfully fought for the state to extend its Renewable Energy Growth Program through 2028. This provides a limited number of landowners who install renewable energy sources such as solar panels or turbines a price for surplus energy they sell back to the grid. “We are finally picking up speed on renewables,” says Kat Burnham, ECRI vice president of policy. “Now we need to meet the growing demand.”

Meanwhile, ECRI organizations are greening communities. Last year, the U.S. Green Building Council of Rhode Island helped ensure that Rhode Island amended its Green Buildings Act, making it the first state to require that the grounds of new or renovated state facilities meet LEED (Leadership in Energy and Environmental Design) and SITES (Sustainable Sites Initiative) standards. And the Woonasquatucket River Watershed Council is helping neighborhoods build rain gardens and green infrastructure (such as the Red Shed Bike Shop’s green roof in Olneyville, above) to trap polluted stormwater before it enters the river.

One Federation for Wildlife

The National Wildlife Federation will host its 82nd annual meeting from June 6 to 9 at the Westfields Marriott Washington Dulles in Chantilly, Virginia. NWF members as well as affiliates and partners will discuss critical wildlife issues and how to advance species and habitat conservation in today’s challenging world. NWF will also honor outstanding conservation leaders, including the Affiliate of the Year. Registration closes May 14.