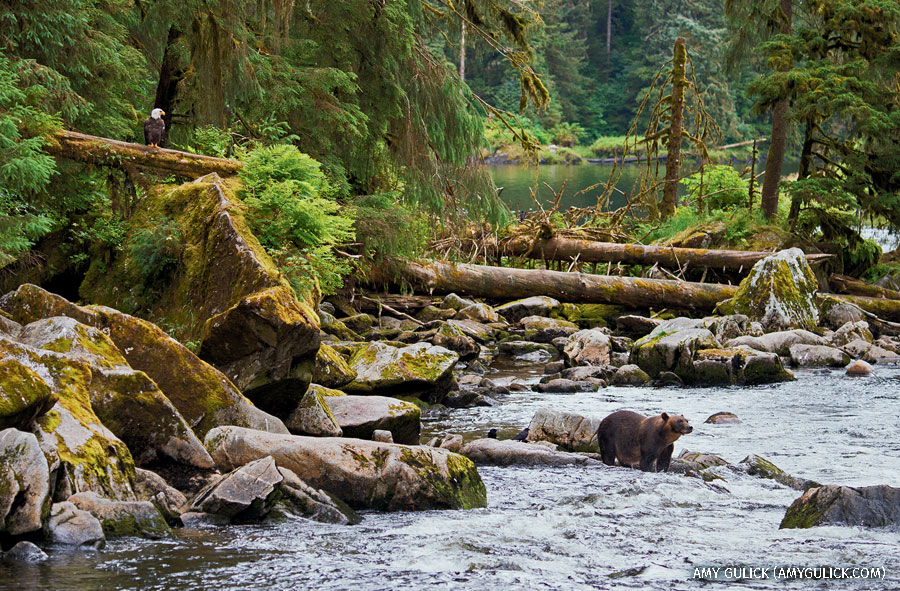 Saving salmon by saving the Tongass

“I eat salmon every day. It’s kind of like eggs in other places,” says Meredith Trainor, executive director of the Southeast Alaska Conservation Council (SEACC), which became the National Wildlife Federation’s 52nd affiliate in June. “For NWF, Alaska represents one of our nation’s last best chances to protect large-scale ecosystems and the iconic wildlife that depend on them,” says Les Welsh, an NWF director of conservation partnerships who helped bring SEACC aboard. 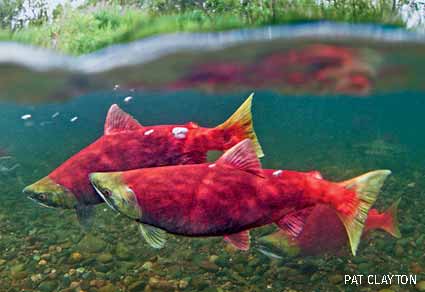 For Trainor, this alliance will provide critical help in fighting to protect Alaska’s wilderness, particularly in the Tongass National Forest (above). At 16.9 million acres, the Tongass is the largest national forest in North America, covering most of Southeast Alaska. Known as America’s Salmon Forest, the Tongass and its network of lush islands and shores are braided by rivers, lakes and streams that support nearly 80 percent of all salmon (pictured) commercially fished in Southeast Alaska.

Founded in 1970, SEACC devotes itself to protecting this forest and the lifeways of area residents and Native peoples. Today that effort is focused on fighting to uphold what’s known as the Roadless Rule, which the U.S. Forest Service (USFS) established in 2001 to limit roadbuilding and logging on some 58.5 million acres in national forests.

In 2018, the Governor of Alaska petitioned USFS to issue a new Alaska-specific rule that would allow portions of the Tongass to be developed for roads and logging. To prevent that change, SEACC urged the public to submit comments in support of upholding the original rule; most of the 140,000 comments submitted took that position. SEACC is also enlisting help from activists and conservation groups such as NWF to fight the rule change. “Grassroots power is built one person at a time,” says Trainor. She’s hopeful that with all eyes on the Tongass, its roadless nature—and the wildlife that depend on it—will win the fight. 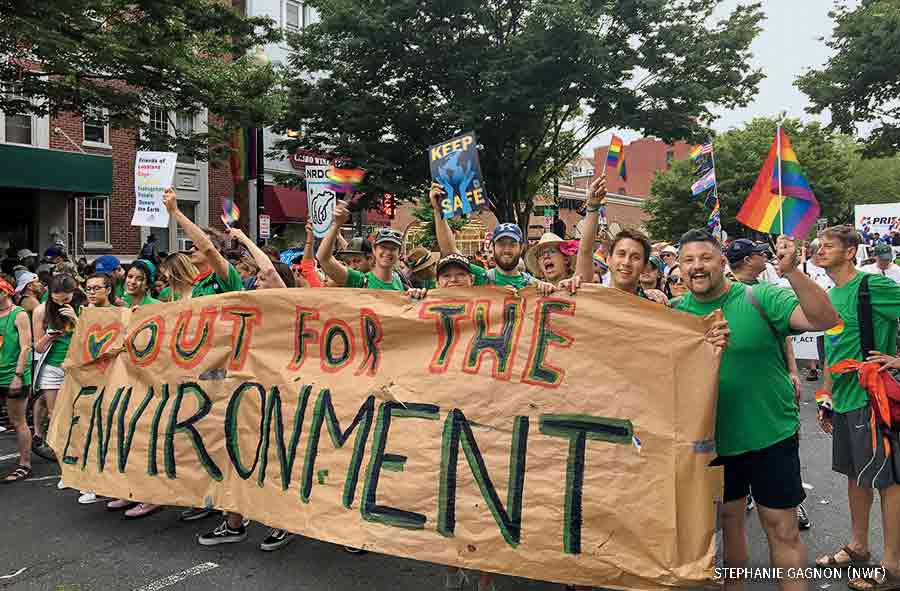 On June 13, NWF and several other environmental groups marched together in the Washington, D.C., Capital Pride Parade (above) to celebrate LGBTQ+ rights and show support for conservation. “I was proud to be there on multiple levels,” says NWF Naturalist David Mizejewski. “I was proud to be celebrating with my people and proud to be with my colleagues in this movement.”

Chanté Coleman, NWF’s director of equity and justice, marched in a pride parade in Annapolis, Maryland, home base of Coleman and NWF’s Mid-Atlantic Regional Center. Coleman has a vision for the Federation that focuses on a culture of excellence. “My goal is to ensure NWF is a safe and welcome space where people, no matter how they identify, feel comfortable coming to work,” she says. As part of its commitment to diversity, equity, inclusion and justice, the Federation also sponsors the LGBTQ Outdoor Summit, a welcoming event for people of diverse backgrounds. “Ecosystems are strongest and most resilient when they are diverse and complex,” says Mizejewski. “This is also true of the conservation movement.” 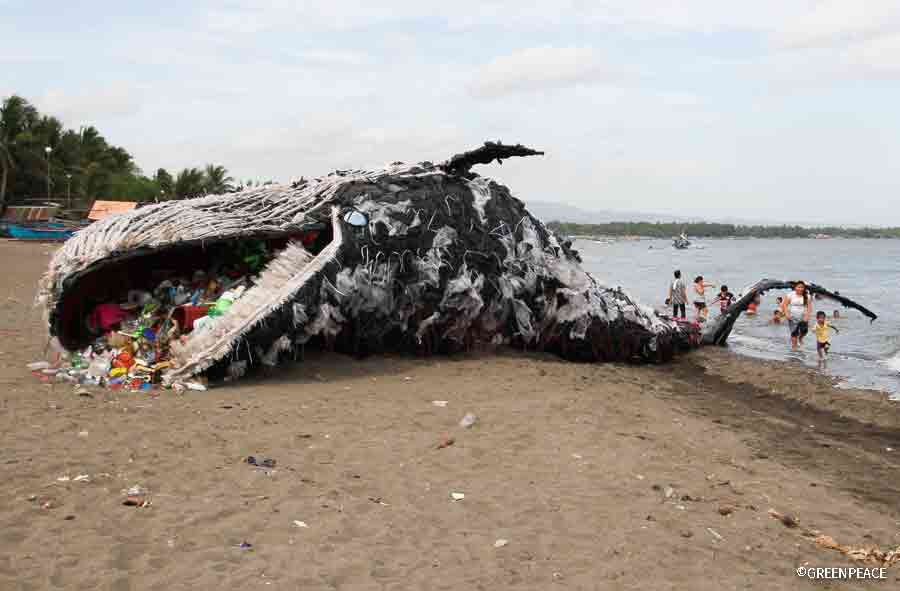 At the Federation’s annual meeting in June, representatives from 51 of NWF’s state and territorial affiliates voted to approve eight affiliate-written conservation policy resolutions that will help guide NWF policy.

Several resolutions support federal action. One encourages the U.S. Congress to permanently protect the Grand Canyon from uranium mining. Another calls on Congress to develop an ambitious national policy to eliminate 90 percent of single-use plastics by 2025—a move that would reduce harmful impacts on marine wildlife such as whales (sculpture above). Still another urges investment in rebuilding America’s crumbling infrastructure in ways that can reduce and sequester carbon emissions by utilizing energy-saving building materials, efficient transportation and natural-systems protection from flooding. And one advocates that Native American tribes receive adequate funding to support their wildlife agencies and conservation efforts. Among other key resolutions passed: One urges the U.S. Environmental Protection Agency to reevaluate widespread use of herbicides 2,4-D and dicamba because they harm pollinators. Another supports the responsible use of prescribed burns by forest managers to minimize catastrophic wildfires.

“This affiliate-resolution process demonstrates the democratic and grassroots essence of the National Wildlife Federation family and strengthens our unity and clout,” says Jim Lyon, NWF’s vice president for conservation policy. “It allows us to speak with one unified voice on the most important conservation issues of the day.” 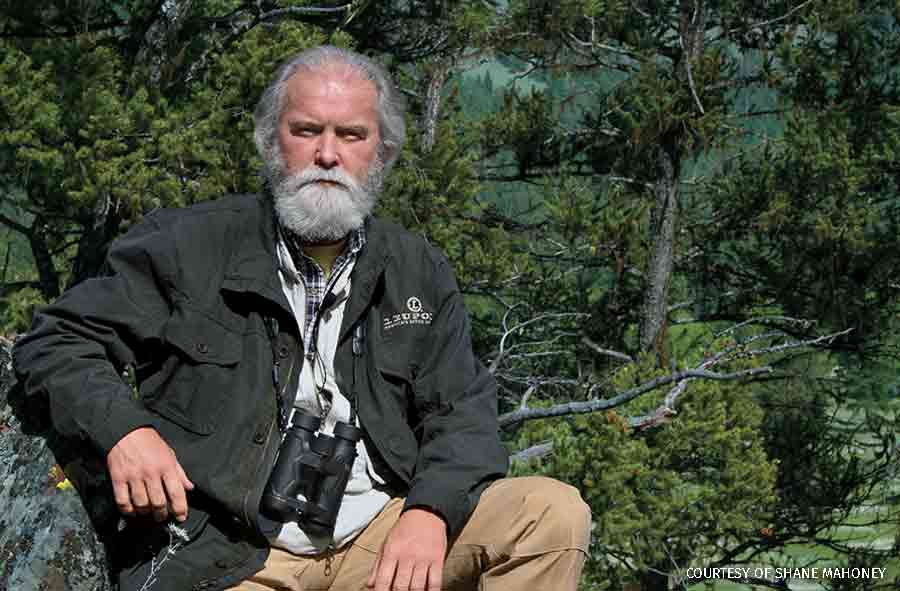 The Federation recently entered into a partnership with Conservation Visions, an organization dedicated to educating and inspiring people about the sustainable use of natural resources. Its founder and CEO, Shane Mahoney (above), has spent his life outdoors hunting and angling, which he says developed his passion for animals and the environment. A biologist and Newfoundland native, Mahoney speaks around the world about the importance of connecting to nature. “Hunting and angling give people a profound appreciation for how nature works,” he says—the key to garnering support for the conservation movement. 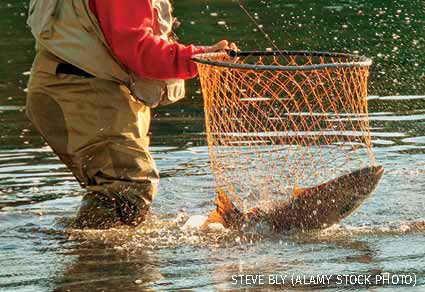 One of Conservation Visions’ newest initiatives is called Wild Harvest, which encourages people to harvest their food through hunting and other activities such as foraging for berries and fishing (pictured). The program is conducting the first-ever comprehensive analysis of the ecological, economic and social benefits of sustainably harvesting food from nature as opposed to buying commercially produced food. “I want to enhance—in public and political minds—the valuation of animals and the habitats they rely on by speaking about something everyone considers important: healthy food,” says Mahoney.

During the next three years, NWF—a co-sponsor of the Wild Harvest Initiative—will help compile data from wildlife agencies and NGOs to document the benefits of hunting, fishing and gathering for both people and nature. “These activities provide billions of pounds of protein,” says Andy Buchsbaum, vice president of NWF’s One Federation initiative. “It’s low in fat, without commercial steroids or hormones, and it doesn’t require any conversion or destruction of habitat, so the Wild Harvest partnership perfectly aligns with NWF’s conservation mission.” 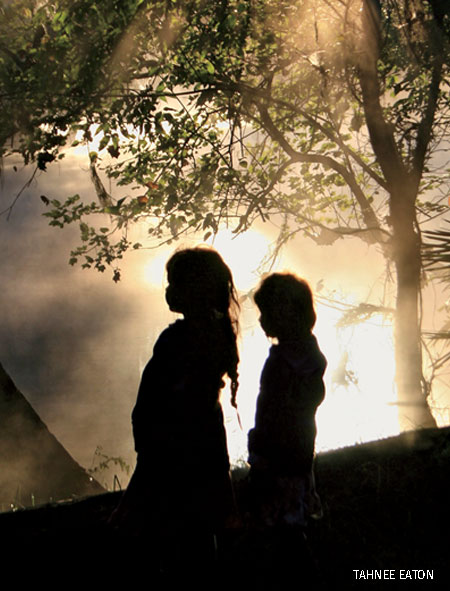 Call of the wild

To build the next generation of conservationists, NWF and outdoor retailers Bass Pro and Cabela’s have created a new youth program based on the idea that it is critical to make every day an outdoor day. Partnering with the YMCA, this free, yearlong program will nurture a love of the outdoors through activities such as fishing, archery and kayaking. “The theory is, if you don’t get outside to enjoy nature, you won’t appreciate it, and if you don’t appreciate it, you won’t protect it,” says Kim Martinez, NWF’s senior director of K-16 education programs.

Drawing from the Federation’s Connecting Kids and Nature program, YMCA staff will continue the education in their after-school programs. “This partnership will have a meaningful impact on the children who participate,” says Dawn Rodney, NWF’s vice president of innovation, “by creating a lifelong love of nature.”