Corals in the depths of the Gulf suffered a direct hit from the spill—but some are showing signs of resilience. 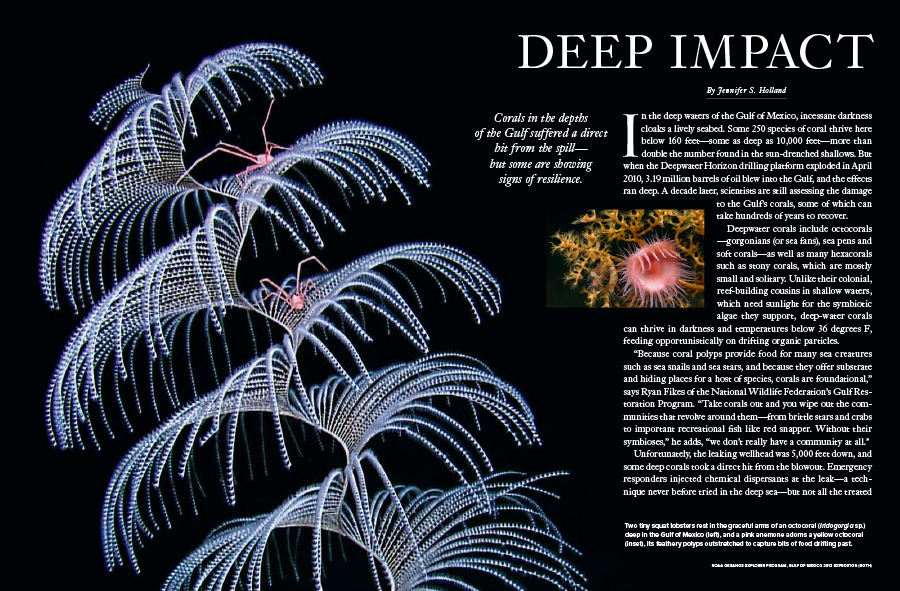 Two tiny squat lobsters rest in the graceful arms of an octocoral (Iridogorgia sp.) deep in the Gulf of Mexico (above), and a pink anemone adorns a yellow octocoral (inset), its feathery polyps outstretched to capture bits of food drifting past. (Photos by NOAA Okeanos Explorer Program, Gulf of Mexico 2012 Expedition)

IN THE DEEP WATERS OF THE GULF OF MEXICO, incessant darkness cloaks a lively seabed. Some 250 species of coral thrive here below 160 feet—some as deep as 10,000 feet—more than double the number found in the sun-drenched shallows. But when the Deepwater Horizon drilling platform exploded in April 2010, 3.19 million barrels of oil blew into the Gulf, and the effects ran deep. A decade later, scientists are still assessing the damage to the Gulf’s corals, some of which can take hundreds of years to recover.

Deepwater corals include octocorals—gorgonians (or sea fans), sea pens and soft corals—as well as many hexacorals such as stony corals, which are mostly small and solitary. Unlike their colonial, reef-building cousins in shallow waters, which need sunlight for the symbiotic algae they support, deep-water corals can thrive in darkness and temperatures below 36 degrees Fahrenheit, feeding opportunistically on drifting organic particles.“

Because coral polyps provide food for many sea creatures such as sea snails and sea stars, and because they offer substrate and hiding places for a host of species, corals are foundational,” says Ryan Fikes of the National Wildlife Federation’s Gulf Restoration Program. “Take corals out and you wipe out the communities that revolve around them—from brittle stars and crabs to important recreational fish like red snapper. Without their symbioses,” he adds, “we don’t really have a community at all.”

Unfortunately, the leaking wellhead was 5,000 feet down, and some deep corals took a direct hit from the blowout. Emergency responders injected chemical dispersants at the leak—a technique never before tried in the deep sea—but not all the treated oil rose to the surface; more than a third formed giant plumes in deep water. Meanwhile, oil and dispersant from the surface began to sink to the bottom. In all, scientists estimate the spill affected 770 square miles of ocean floor, and though a small fraction of that contained corals, any patch of reef is deemed vital to the broader Gulf ecosystem.

To his surprise, the spill didn’t cause “total devastation,” says marine ecologist Peter Etnoyer of the National Oceanic and Atmospheric Administration. “It wasn’t like a nuclear blast where all is leveled. The effects were patchy.”

Those effects included the physical assault on coral from what’s called a “dirty blizzard,” caused when marine snow—natural detritus in the water—became tainted by oil and dispersants and carried those toxins to the seafloor. Areas beyond 14 miles from the blowout appeared unscathed, but some sites within 8 miles “were covered in flocculent material, coated in crud,” says Charles Fisher, professor emeritus at Penn State University, whose team made repeated visits to affected sites via a remotely operated vehicle to assess coral damage over time. “Mucus was streaming off of them, which is a stress response,” he says. As of late 2010, “they were in very poor health.”

Yellow octocoral (inset) thrives in the Flower Garden Banks National Marine Sanctuary about 100 nautical miles off the Texas coast, an area untainted by the spill. And several species of coral dwell along the Florida Escarpment (above), which straddles shallow and deepwater realms.

A hostile environment for recovery

By spring 2011, much of the oil and dispersant had visibly disappeared, but not all the coral showed signs of recovery. Where branches were exposed, stinging organisms called hydroids took hold. As a result, brittle stars—which feed on corals and help protect them—disappeared from many of their hosts. Another problem: Studies have shown that exposure to oil dissolved in seawater causes sloughing off of the coral skeleton. “Tissue simply falls off, resulting in mortality of the affected polyps,” says Penn State molecular ecologist Iliana Baums. “We don’t know the exact process for that tissue death,” she adds, but it raises the concern about long-term survival of the hardest-hit animals.

In related work, Temple University’s Erik Cordes and colleagues recently reported on corals’ cellular response to the incident. “Some tissues went through programmed cell death—a sort of ‘cellular suicide’—shutting off energy to those areas to not waste [resources],” he says. “In other areas they produced a lot of melanin pigment—we could see tissues darken—which acts as a barrier to toxins moving through the tissues. It was fascinating to see how the corals tried to protect themselves from further losses.”

Interestingly, the combination of oil and dispersants has proven more toxic than oil alone. At high concentrations, the chemically dispersed oil, which persisted for months, can kill corals in just four days. In responding to an oil spill, then, “what works at the surface to keep the oil offshore may do more harm than good” in the deep, Cordes says.

Oil can also harm corals by disrupting reproduction and early development and by blocking coral larvae as they disperse and try to settle on the bottom. Importantly, the interplay between the shallows and the depths is complex and not well understood, Cordes says, but the nutrient recycling that corals do on the seafloor can affect, say, a local fishery’s productivity. So those connections are vital.

Warming waters place further burdens on oil-exposed corals. “Turn up the heat even slightly and the corals start showing a stress response,” says Cordes. “These are animals that are used to an incredibly stable environment, so even small adjustments count.” Stressors such as climate change, worsening and more-frequent storms, changing pH and others “don’t just add up, they multiply and make it harder and harder for the corals to deal with the next insult.”

Is any injured coral coming back? “It’s a mixed bag,” says Fisher. “Where less than 20 percent of a colony was impacted originally there was pretty much complete recovery. Above that, there is less improvement. And we have no idea about genetic damage long-term. We just don’t know yet.”

In shallow-water environments, restoration efforts such as placing lab-raised corals on the seabed can be effective. “But restoration becomes more difficult the deeper you go,” Fisher says. “There are proposals to test methods of putting deep-living corals at affected sites. But we may be better off spending those funds to create more marine protected areas, while setting up robust deep-sea monitoring to look for changes due to climate and anthropogenic activity.” Complicating matters, “we don’t even know what’s ‘normal’ in the deep-sea environment,” he adds. And it’s difficult to establish a baseline in a place so heavily in flux.

On a positive note, “the oil affected a relatively small area acutely,” Fisher says. Corals in the blast zone “got hammered,” he says, “but Gulf-wide, the spill likely did not eliminate any coral species.” That said, “with acidification, tainted runoff, dead zones, ongoing oil leaks and temperature changes, we are stressing the Gulf ten ways to Sunday, with effects we can only guess at.”

As recovery continues—funded by a $16.5 billion settlement with British Petroleum and other responsible parties—researchers aim to map and fill in critical gaps in the understanding of deepwater habitats; address other threats to these ecosystems such as fishing, boat anchoring and invasive species; and test techniques for deep-sea coral propagation that would allow scientists to seed dead areas with new life. Designating new protected areas—such as 21 sites covering 480 square miles that the Gulf of Mexico Fishery Management Council made off limits to coral-damaging fishing gear—is also “a big part of the restoration plans,” says Cordes.

The work is both reaction to the spill and preparation for the future. “It will happen again,” Fisher says. “In the deep ocean, a hostile environment, stuff happens.” And with thousands of oil rigs in the Gulf, “we need to learn all we can about what’s there and what the effects of future accidents might be, so we can be ready for the next thing.”