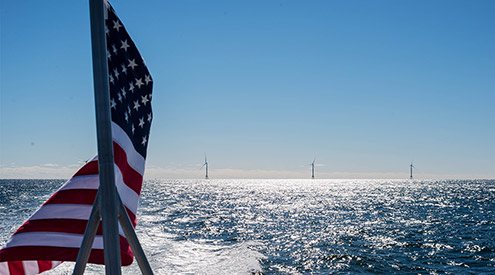 "The climate crisis is one of the most urgent challenges of our time and demands action and leadership from states across the nation," said Curtis Fisher, Northeast Regional Executive Director at the National Wildlife Federation. "We applaud Governor Murphy for defining the critical role that offshore wind must play in transforming New Jersey from a fossil fuel powered past to a clean, affordable, and reliable energy future. We will keep working together to protect wildlife every step of the way, while safeguarding communities, creating jobs, and supporting sustainable economic growth."

“As recent reports have shown, we have lost billions of birds in the last few decades, insects are dying off at an alarming rate, and we are in the midst of a wildlife crisis, which are all being driven, at least in part, by climate change. Thankfully, Governor Murphy's administration has decided to take this challenge head-on with his visionary energy master plan, which includes one of the nation's strongest commitments to responsibly developed offshore wind energy,” said Eric Stiles, president and CEO of New Jersey Audubon. “The EMP is a bold proposal to tackle a problem that requires immediate action, and we applaud the governor’s vision for a clean energy future that fights climate change while protecting our natural resources.”

The immense economic and environmental benefits of offshore wind power have been realized across the globe for over a decade. In the United States, leadership from the states has been pivotal in this industry catching wind. For more on offshore wind in New Jersey and the bold advancements made by the Murphy Administration, visit offshorewind.nwf.org/New-Jersey.