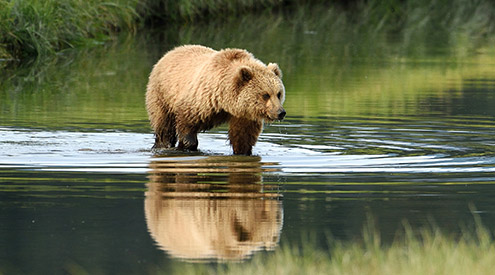 Lifting Protections from the Tongass Forest Would Be an “Ecological Atrocity”

WASHINGTON, D.C — The final Environmental Impact Statement from the U.S. Forest Service on its plan to lift protections from the roadless areas of the Tongass National Forest ignores threats to diverse wildlife habitat, old-growth forests, and the rural economies of Southeast Alaska. The agency plans to allow logging more than half of North America’s largest intact rainforest.

“The Tongass National Forest contains centuries-old trees that provide home to wildlife and play a key role in storing carbon which mitigates climate change. The administration’s quest to open up nine million acres of this pristine forest to be clear cut would be an ecological atrocity,” said Collin O’Mara, president and CEO of the National Wildlife Federation. “This extreme proposal will harm a stunning array of wildlife, threaten wild salmon populations, and undermine local economies that depend on a vibrant outdoor recreation industry.”

“The Roadless Rule has been one of the smartest and most popular land management policies the federal government has ever adopted,” said Meredith Trainor, executive director of the Southeast Alaska Conservation Council. “Over 250,000 Americans wrote to the Forest Service, urging the agency to keep these protections in place to safeguard clean water, healthy fish and wildlife habitat, and the recreation opportunities that are essential to the economic, cultural, and ecological health of Southeast Alaska.”

The Tongass National Forest is the largest forest in the United States and one of the largest intact temperate rainforests in the world. It plays a vital role in absorbing greenhouse gas emissions, storing approximately 8 percent of the total carbon of all the national forests of the lower 48 states combined. It contains sacred sites of great importance to the Tlingit, Haida, and Tsimshian people who have called the Tongass home since time immemorial.

The Tongass is also home to remarkable diversity of species, including rare Alexander Archipelago wolves, Sitka black-tailed deer, brown bears, and bald eagles. Every year more than a million visitors come to the Tongass to enjoy the old growth forest and to hunt, fish, hike, and camp there. The forest supports a robust economy of tourism, commercial and sport fishing, and many other small businesses.

The Roadless Rule was adopted in 2001 and has helped protect 58 million acres of inventoried roadless areas in national forests while giving flexibility for activities such as recreation, hydropower, mining access, and wildfire response.