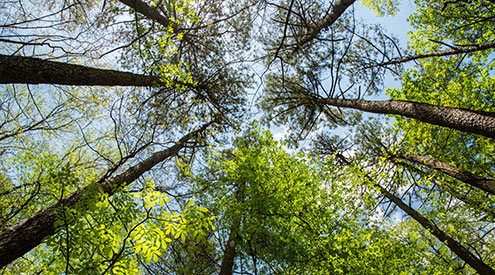 The proposed 2020 Michigan Forest Action Plan also fails to include tribal representatives in the decision-making process and doesn’t address neglected maintenance of recreational facilities, according to an analysis from the National Wildlife Federation.

“This plan affects everyone who enjoys Michigan’s great outdoors but unfortunately it avoids touching on major conservation issues of the day and fails to extend a welcoming hand to new groups of users,” said Jason Dinsmore, National Wildlife Federation Director of Conservation Partnerships for the Northern Great Lakes.

The 10-year plan, covering 19.3 million acres of forest land in both the Upper and Lower Peninsulas, is being updated by the Michigan Department of Natural Resources. Final approval is expected in 2021.

While the plan includes background data and history of the state’s forest lands, it avoids any discussion of pressing contemporary issues like deferred maintenance of campsites or balancing the interests of motorized vs. non-motorized users.

It also leaves out any recommendations on how Michigan can address climate change, which is already impacting deer, waterfowl and native fish throughout the region.

“The DNR’s proposal does little to demonstrate how the state will prepare for and combat major climate shifts that are affecting our forest lands and the wildlife that live there,” said Dinsmore.

The National Wildlife Federation is also concerned whether the Michigan DNR in drafting its plan has done enough to seek out the voices of underserved, minority and other disenfranchised communities.

“The Great Northwoods can’t reach its full potential until it’s accessible to everyone,” said Dinsmore. “That means affirmative steps to engage with and listen to all stakeholders, especially tribal nations, taking steps to invite new users, and paying special attention to creating a positive experience for all people."

Dinsmore referred to the recent ugly “Birding while Black” incident that took place in New York’s Central Park, which shows the kind of harassment that people of color can face when they engage in outdoor recreation. He says Michigan can show leadership by taking pro-active steps that show such behavior is unacceptable in the Midwest.

In addition to commenting on Michigan’s Forest Plan, the National Wildlife Federation has also just launched its “Great Northwoods Initiative.” The scope of the project will include northern hardwood forests above the 45th parallel in Michigan, Minnesota and Wisconsin, stretching from Lake Superior to Lake Huron.

Working with local partners, the effort will focus on sustainable management of northern hardwood forests as an economic driver for the region while actively managing forests for the impacts of climate change. It also calls for expanding multi-use recreation opportunities to a more diverse population of outdoor users.