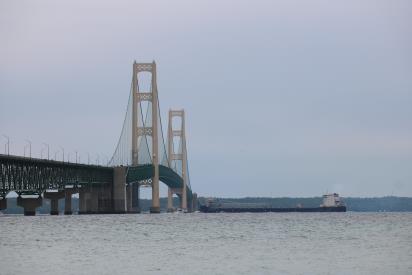 Enbridge Continues to Urge Delays in Resolution of Gov. Whitmer’s Order to Shut Down Line 5

ANN ARBOR, Mich. (Sept, 16, 2021) – Enbridge’s court filing from yesterday seeks to further delay resolution of Gov. Gretchen Whitmer’s order revoking their 1953 easement to operate the Line 5 oil and natural gas liquids pipeline along the bottomlands of the Straits of Mackinac. For the past five months, Enbridge and the State of Michigan have been engaged in voluntary mediation over Enbridge’s challenge to Michigan’s authority to revoke the easement and shut down Line 5.

The voluntary mediation has not led to a settlement. The State of Michigan has definitively concluded that further mediation will not be productive. Enbridge’s filing calls for more mediation, despite the State’s clearly stated decision not to continue.

At stake is whether Enbridge’s challenge to Michigan’s authority to enforce the terms of its own state laws will be heard in federal or state court, and each day of delay allows Enbridge to continue violating Gov. Whitmer’s order to shut down the pipeline as of May 12, 2021, pumping up to 23 million gallons of oil through the Straits of Mackinac each day while making $1-2 million in profit, daily.

“From the moment Enbridge refused to follow the state’s order for shut down, they have put forth legal roadblocks that have only one goal: delay. This tactic continues today as they file in federal court another plea for delayed decision making. This is predictable behavior by Enbridge since they continue to make at least $1-2 million every day that Line 5 pumps up to 23 million gallons of oil through the Great Lakes. Enbridge is attempting to prevent the merits of the case from being heard by making outlandish claims that attack state sovereignty, risk public trust and ignore tribal treaty rights. We thank Governor Whitmer and Attorney General Nessel for their steadfast leadership to move this case forward with urgency so their order to remove Line 5 to protect our way-of-life can be enforced.”