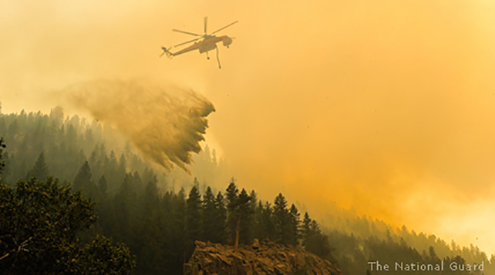 WASHINGTON, D.C. — The National Wildlife Federation’s “Unnatural Disasters” report highlights how climate change is fueling hurricanes, floods, wildfires, algal outbreaks, droughts, and heatwaves that threaten people and wildlife alike. The 2021 edition of the report and story-map documents nearly 200 climate-fueled disasters and underscores the need for swift action to address the climate crisis and de-carbonize the U.S. economy by 2050.

“From coastal hurricanes and inland flooding to prolonged drought, raging megafires, and heatwaves, the climate crisis is here and already impacting people and wildlife in real and tragic ways,” said Collin O’Mara, president and CEO of the National Wildlife Federation. “This innovative report highlights this tragic reality unfolding all around us and underscores why we must leverage every tool available to safeguard communities and ensure our wildlife and precious natural resources survive for future generations.”

The report, which follows on the heels of the latest “code red” warning from the Intergovernmental Panel on Climate Change, details growing climate impacts on people and wildlife from disasters such as:

The map update also highlights the impact of unnatural disasters on communities of color which are disproportionately impacted by the effects of climate change. Like so many other human-made hazards and pollution, families in these areas often are at the front lines of rising tides, fire, and extreme heat but have fewer resources and options for recovering from disasters or moving out of harm’s way.

The interactive feature also highlights examples of how communities are identifying climate risks and building resilience for more frequent and damaging disasters.

The National Wildlife Federation is advocating for a number of climate and clean energy priorities in congressional infrastructure and budget legislation being considered this month. Click here to learn more.