The Art of Whale Watching

Off the coast of Maui, an artist teams up with filmmakers to capture the essence of giant hump 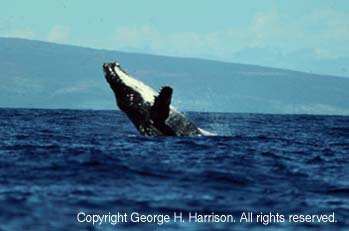 John Seerey-Lester suspected his mind was playing tricks on him. Traveling with a film crew in a boat off the coast of Maui, the British-born wildlife painter heard the mournful song of a humpback whale from atop the deck. "I never imagined you could hear a humpback above the surface, " he says. "But when I realized the sound was actually resonating up through the bottom of the boat, I knew it was for real."

So did Al Giddings. The renowned underwater cinematographer immediately lowered himself over the side of the boat along with some special camera equipment, then dove in search of the singing male humpback. "I couldn't see him, but I could feel the vibration of his song in my chest," says Giddings, who returned to the surface minutes later without capturing the huge animal on film but nevertheless excited by the encounter. "It was an experience," adds Seerey-Lester, "that truly inspires."


In an unusual alliance of artists from different mediums, Seerey-Lester shared a boat for several days in Hawaii last winter with Giddings and other filmmakers to pursue a common goal: to create works of art that help promote whale conservation. For painter Seerey-Lester, the endeavor provided an unparalleled opportunity to make field sketches for a portrait of humpbacks. For cinematographer Giddings, it offered an equally unparalleled chance to get close to the animals for a giant-screen film on the great whales, which he is codirecting for National Wildlife Productions (NWP), NWF's television and film-production division.

Six years in the making and funded in part by a National Science Foundation grant, Whales premieres this November in giant screen theaters all over the world. "We're concentrating on showing the behavior and social interactions of the baleen whales--the filter-feeding species that are the largest of the great whales," says Christopher N. Palmer, president of NWP and producer of the film. "In doing so, we're letting these magnificent animals speak for themselves in terms of why whale conservation is so important."

In addition to their breeding grounds in Hawaii, humpbacks were filmed at their summer feeding areas off Alaska. The film also includes never-before-seen footage of endangered right whales off Patagonia and of the largest mammals on Earth, 100-foot blue whales, swimming off California. The giant-screen format, which includes 60-foot-high screens in many theaters, "provides viewers with eye-boggling images," says Palmer. "It literally pulls you right out of your seat and into the action."

Every winter in Hawaii, the largest concentration of endangered humpback whales in the North Pacific gathers to breed. The male humpbacks, which grow as large as 50 feet and 45 tons, are best known for their songs--perhaps the most complex in the animal kingdom.

"When you swim up next to a singing whale, the song is so loud that you feel as if someone is pressing you to a wall with their open palms, shaking you until your teeth rattle," says biologist Roger Payne, one of the world's leading whale experts and a science advisor to the NWP project. These songs can last as long as 30 minutes and possibly function as a vocal display by which a male attracts a female. In the waters off Maui, hundreds of male humpbacks sing every year.

"Capturing whales on film is a creative challenge under any conditions, but it was particularly difficult with the giant screen format," says codirector David Clark. Much of the responsibility fell on the shoulders of Giddings, the nation's foremost deep-sea filmmaker.

Because whales are spooked by bubbles, Giddings had to shoot all of the underwater giant screen footage without scuba gear. That meant staying submerged without breathing for several minutes at a time. (Giddings formerly held the Guinness record for holding his breath nonstop underwater for 11 minutes.) The difficulty of the task was compounded by the weight of a giant screen camera--about 250 pounds including its waterproof case.

To maneuver the camera, Giddings added slight buoyancy to its underwater housing and dived to depths of 70 feet. Then, when he could no longer hold his breath, he released the camera and swam to the surface. Eventually, the camera surfaced on its own. "It was a brilliant technique," says Clark, "that few people in the world could pull off."

On board the film crew's boat, Seerey-Lester spent a week making sketches for a humpback painting. "I think all of us--painters, filmmakers, scientists--must continually work together to help increase the public's awareness about the great whales," says the Florida-based artist.

Al Giddings agrees. "Our goal with this project is not to point fingers at anyone regarding whaling," he says. "We want to let viewers make up their own minds about why whales are so much more valuable to us alive than dead."


Creating Art to Help Protect the World's Whales
Whales is the first giant-screen film by National Wildlife Productions (NWP). "A giant screen film can be a powerful tool for conveying NWF's conservation message," says NWP President Christopher N. Palmer. "It enables us to reach far beyond the converted to a broader audience." Whales will begin screening in giant screen theaters throughout the world this November. Check local directories for locations and show times.


For More About the Artist ...
John Seerey-Lester's humpback whale painting is available as a limited-edition print from NWF Editions. For more information and the phone number of an art gallery near you, call 1-800-699-9693. NWF Editions is a subsidiary of the National Wildlife Federation, dedicated to sustainable conservation of global natural resources.