What feeds on lizards, chews venomous toad skins and coats its spiky body with frothy saliva? 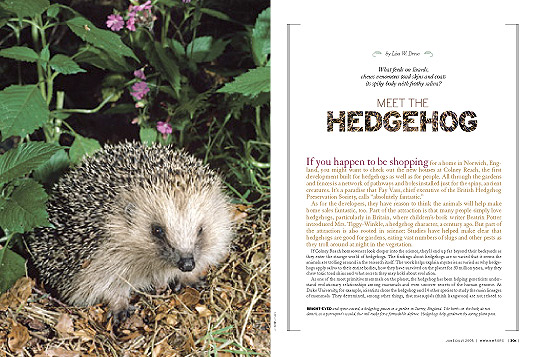 If you happen to be shopping for a home in Norwich, England, you might want to check out the new houses at Colney Reach, the first development built for hedgehogs as well as for people. All through the gardens and fences is a network of pathways and holes installed just for the spiny, ancient creatures. It’s a paradise that Fay Vass, chief executive of the British Hedgehog Preservation Society, calls "absolutely fantastic."

As for the developers, they have reason to think the animals will help make home sales fantastic, too. Part of the attraction is that many people simply love hedgehogs, particularly in Britain, where children’s-book writer Beatrix Potter introduced Mrs. Tiggy-Winkle, a hedgehog character, a century ago. But part of the attraction is also rooted in science: Studies have helped make clear that hedgehogs are good for gardens, eating vast numbers of slugs and other pests as they troll around at night in the vegetation.

If Colney Reach homeowners look deeper into the science, they’ll end up far beyond their backyards as they enter the strange world of hedgehogs. The findings about hedgehogs are so varied that it seems the animals are trolling around in the research itself. The work helps explain mysteries as varied as why hedgehogs apply saliva to their entire bodies, how they have survived on the planet for 30 million years, why they chew toxic toad skins and what secrets they may hold about evolution.

As one of the most primitive mammals on the planet, the hedgehog has been helping geneticists understand evolutionary relationships among mammals and even uncover secrets of the human genome. At Duke University, for example, scientists chose the hedgehog and 14 other species to study the main lineages of mammals. They determined, among other things, that marsupials (think kangaroos) are not related to monotremes (the egg-laying platypus and echidna), which had long been a subject of debate. Such questions are not just academic. "If you are trying to trace, for example, the evolutionary steps of fetal heart development to better understand how fetal defects occur, it helps to know which mammals are related so that you can make accurate inferences about one mammal from another mammal’s development," says researcher Keith Killian, who helped with the Duke findings and is now at the National Institutes of Health.

Still, much about hedgehogs remains unknown. For one thing, scientists think they haven’t even found all the hedgehog species. "We know of at least 14," says hedgehog researcher Nigel Reeve of Britain’s University of Surrey Roehampton. "It’s almost certain that, because hedgehogs are very understudied worldwide, there are more species."

The 14 known species are native to Africa and parts of Asia as well as Europe. Some hibernate through cold winters in the north. Others tolerate desert heat near the equator. Some live in urban areas, adapting well to human habitat. Others live in areas that rank among the most remote places on the planet. They range in weight from one to three pounds.

Hedgehogs spend much of their time alone, but Reeve says it would be a mistake to think of them as solitary. "Hedgehogs do approach each other and can detect the presence of others by their scent," he says. "It is true that they usually do not interact at close quarters, but that does not mean they are unaware of their neighbors. They may occasionally scrap over food items, and rival males attracted to a female may also have aggressive interactions." Still, it’s fair to say that in adulthood hedgehogs meet primarily to mate, producing litters of four or five hoglets as often as twice yearly. 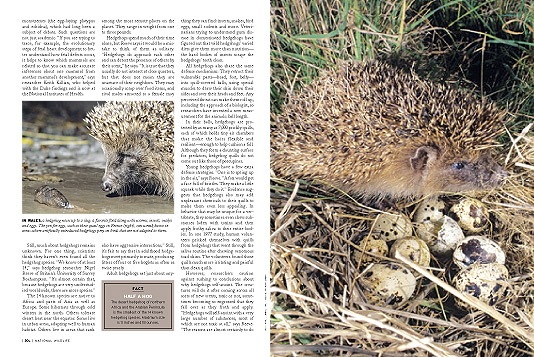 Adult hedgehogs eat just about anything they can find: insects, snakes, bird eggs, small rodents and more. Veterinarians trying to understand gum disease in domesticated hedgehogs have figured out that wild hedgehogs’ varied diets give them more than nutrition—the hard bodies of insects scrape the hedgehogs’ teeth clean.

All hedgehogs also share the same defense mechanism: They retract their vulnerable parts—head, feet, belly—into quill-covered balls, using special muscles to draw their skin down their sides and over their heads and feet. Any perceived threat can make them roll up, including the approach of a biologist, so researchers have invented a new measurement for the animals: ball length.

In their balls, hedgehogs are protected by as many as 7,000 prickly quills, each of which holds tiny air chambers that make the hairs flexible and resilient—enough to help cushion a fall. Although they form a daunting surface for predators, hedgehog quills do not come out like those of porcupines.

Young hedgehogs have a few extra defense strategies. "One is to spring up in the air," says Reeve. "A fox would get a face full of bristles. They make a little squeak while they do it." Evidence suggests that hedgehogs also may add unpleasant chemicals to their quills to make them even less appealing. In behavior that may be unique for a vertebrate, they sometimes even chew substances laden with toxins and then apply frothy saliva to their entire bodies. In one 1977 study, human volunteers pricked themselves with quills from hedgehogs that went through the saliva routine after chewing venomous toad skins. The volunteers found those quills much more irritating and painful than clean quills.

However, researchers caution against rushing to conclusions about why hedgehogs self-anoint. The creatures will do it after coming across all sorts of new scents, toxic or not, sometimes becoming so engrossed that they fall over as they froth and apply. "Hedgehogs will self-anoint with a very large number of substances, most of which are not toxic at all," says Reeve. "The reasons are almost certainly to do with odor-marking of the body, either for camouflage or communication." The animals will use substances as varied as leather, painted wood, even dog feces. "All kinds of quite revolting substances in some cases trigger this self-anointing behavior," says Reeve.

As effective as motionless balls of camouflage-scented quills may be against predators, they don’t stop cars. Every year, many thousands of the animals die on roads in Europe and elsewhere as they go about their nightly business. Along with intensive farming and pesticides, roadkill has taken a toll on hedgehog populations. One 2002 study found the animal’s numbers in Britain had dropped by 20 to 30 percent in a single decade. 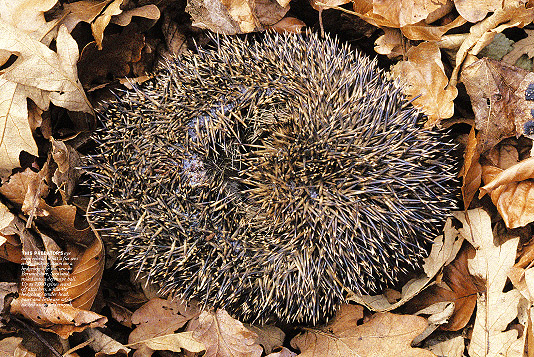 To help combat the decline, the British have established special hospitals for injured hedgehogs, urged that anyone making a bonfire check underneath first for the animals and ensured that hedgehogs can cope with cattle guards. Recently, they even persuaded McDonald’s to alter the packaging of its McFlurry ice cream container, which had been trapping foraging hedgehogs.

Ironically, the English for centuries considered these animals vermin. Even 50 years ago, gamekeepers were killing as many as 10,000 hedgehogs a year, thinking they were nothing more than bird-egg-eating pests.

In some places today, scientists are coming to that same conclusion all over again. In the 1970s, hedgehogs were introduced to the Hebrides Islands, off Scotland, to help combat garden slugs. With no natural enemies there, a few hedgehogs soon turned into thousands. Wildlife researchers have watched the hedgehogs reduce the numbers of rare, ground-nesting wading birds by feasting on the birds’ eggs. One study on the island of South Ulist found that birds in areas cleared of hedgehogs were twice as likely to nest successfully.

Efforts to cull the animals in the past two years have upset Britain’s hedgehog lovers, including celebrities Paul McCartney and Sting. The protestors have countered with strategies for relocating the animals. Such emotion over a bristly little creature that coats itself with spit can seem odd to outsiders. One editorial about the Hebrides brou-haha in Canada’s Montreal Gazette concluded, "It’s a strange cause to get so excited about, but one thing is certain: The day a British tank runs over a hedgehog in Iraq will be the day Britain withdraws its troops and issues a formal apology to all concerned."

In New Zealand, conservationists also have grown concerned about hedgehogs as the animals have spread throughout the country following their introduction in the late 1800s to help control garden pests. Biologist Chris Jones of Manaaki Whenua-Landcare Research, an independent environmental institute, thinks hedgehogs should share, along with predators such as ferrets and feral house cats, the blame for gobbling up birds’ eggs, lizards and grasshopperlike wetas. He compares the better-known predators to the bad guys in face masks during a bank heist. "Meanwhile," he says, "hedgehogs are the guys in the background, quietly opening the safe." He suggests that New Zealanders set hedgehog traps at the start of bird-nesting season.

One of Jones’ findings is that during breeding season, females seem to have a knack for going after lizards’ high-energy foods. In one hedgehog stomach, researchers found 283 weta legs.

If conservationists have their way, hedgehogs will persevere in their native ecosystems, which now include the gardens of Colney Reach. "Hedgehog species have been around for about 30 million years," says Reeve. "It would be a terrible shame if we saw them off the planet. I think that’s unlikely, but we don’t really want to take what’s a common mammal and turn it into a rarity. We want it to remain an important species in our environment."

Lisa W. Drew lives in Fairbanks, Alaska, where the closest thing to a hedgehog is the completely unrelated porcupine.