Inferior boxes can be "death traps." Find out how to do it right. 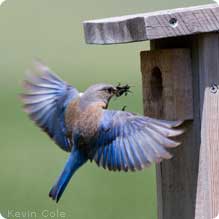 Once plentiful, the nation's three bluebird species—the eastern, mountain and western bluebird—have in recent decades lost many of their natural nesting sites to competition from nonnative birds like European starlings, pesticide use and loss of habitat.

"They've had the heck beat out of them," says Steve Eno, a Nebraska-based bluebird activist and board member of the North American Bluebird Society.

Eno is one of thousands of volunteers who have been trying for years to give the creatures a wing up with the use of man-made nesting boxes that provide safe havens for the birds.

As sales of nesting boxes more than doubled from an estimated 100,000 sold in 1987 to nearly 250,000 in 1997, some manufacturers rushed to market with inferior products that may be nothing more than what Eno calls "death traps for bluebirds."

So the North American Bluebird Society decided to provide manufacturers and distributors with recommendations for improvements they could make to commercial boxes. It also sought ways to increase consumer education on the proper use and monitoring of the boxes.

A bluebird house should be made of sturdy wood to keep predators out.

The house should have a circular hole no larger than one and a half inches in diameter for eastern bluebirds, and one and nine-sixteenths of an inch for mountain and western bluebirds.

The top of the house should lift up for monitoring. If the nest inside is made of fine grasses or pine needles and has a deep cup, it probably belongs to a bluebird; only nests of nonnative species should be removed from the box.

Bluebird boxes should be monitored weekly during the nesting season to ensure that nonnative birds are not setting up house, to track population trends and to keep out parasites.

A decade ago, the North American Bluebird Society introduced a formal nest-box approval process which includes a sticker and educational materials that retailers can distribute. To Eno and his colleagues' surprise, the reaction from manufacturers was almost universally favorable.

"It's important for people to distinguish between boxes that are made to the proper specifications from those that are not," said Jim Carpenter, president of the retailer Wild Birds Unlimited.

This article was adapted from "To Create a Safe Place for Bluebirds, Start With the Correct Nest Box" by Susan Champlin Taylor, National Wildlife, August/September 1998.

Find out how to build or buy nest boxes for a variety of backyard bird species.
Learn how to turn your yard into a Certified Wildlife Habitat.