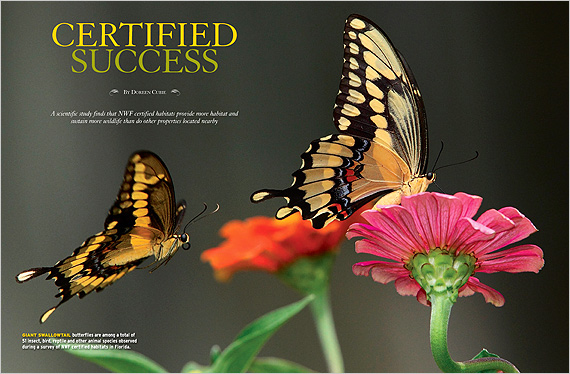 WHEN STEFFENIE WIDOWS DRIVES DOWN THE STREETS surrounding her hometown of Orlando, Florida, she usually recognizes the yards that are officially certified as wildlife habitat by the National Wildlife Federation. “You can just tell,” says Widows. “For one thing, there isn’t much lawn.” Instead, the yards are more natural, often dotted with wax myrtle, saw palmetto and other natives as well as butterfly plants such as milkweed and passion vine.

As part of her master’s program in conservation biology and sustainable development at the University of Wisconsin–Madison, Widows spent the summer of 2010 crisscrossing the Orlando area investigating properties enrolled in NWF’s Certified Wildlife Habitat® (CWH) program. Her goal was to determine whether the program would stand up to scientific scrutiny. In other words, do certified yards provide wildlife habitat not available in noncertified yards and does that additional habitat actually benefit native wildlife?

The idea to convert suburban yards into minihabitats for wildlife grew out of studies conducted in the early 1970s by two U.S. Forest Service employees: Richard DeGraaf and Jack Ward Thomas. For many years, they and other biologists had known that wildlife on national forest and national wildlife refuge lands thrived when provided food, water, cover and places to raise young. DeGraaf and Thomas believed those four components would work equally well in backyards, and they mapped out a plan for NWF that homeowners could follow. Now in its 39th year, the Federation’s program has certified nearly 150,000 homes, in addition to businesses, places of worship, schools and entire communities, adding up to some 300,000 acres of habitat.

To find out whether these minihabitats are making a difference for wildlife, Widows and her graduate advisor, David Drake, an associate professor in the university’s Department of Forest and Wildlife Ecology, targeted Orlando’s Orange and Seminole Counties. One of the fastest-growing regions in the country, this part of central Florida has been transformed in the past 50 years from an area of small towns surrounded by lakes and citrus groves to the home of Disney World and nearly 1.6 million people. “Today about 85 percent of all Americans live in urban or suburban areas,” says Drake. “Wildlife biologists need to do more research in these human-dominated habitats.” 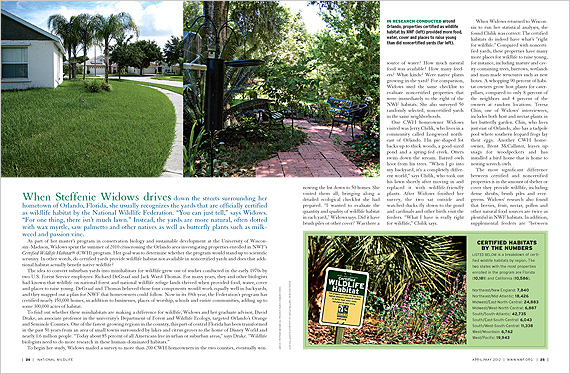 To begin her study, Widows mailed a survey to more than 200 CWH homeowners in the two counties, eventually winnowing the list down to 50 homes. She visited them all, bringing along a detailed ecological checklist she had prepared. “I wanted to evaluate the quantity and quality of wildlife habitat in each yard,” Widows says. Did it have brush piles or other cover? Was there a source of water? How much natural food was available? How many feeders? What kinds? Were native plants growing in the yard? For comparison, Widows used the same checklist to evaluate noncertified properties that were immediately to the right of the NWF habitats. She also surveyed 50 randomly selected, noncertified yards in the same neighborhoods.

One CWH homeowner Widows visited was Jerry Chilik, who lives in a community called Longwood northeast of Orlando. His pie-shaped lot backs up to thick woods, a good-sized pond and a spring-fed creek. Otters swim down the stream. Barred owls hoot from his trees. “When I go into my backyard, it’s a completely different world,” says Chilik, who took out his lawn shortly after moving in and replaced it with wildlife-friendly plants. After Widows finished her survey, the two sat outside and watched ducks fly down to the pond and cardinals and other birds visit the feeders. “What I have is really right for wildlife,” Chilik says.

When Widows returned to Wisconsin to run her statistical analyses, she found Chilik was correct: The certified habitats do indeed have what’s “right for wildlife.” Compared with noncertified yards, these properties have many more places for wildlife to raise young, for instance, including mature and cavity-containing trees, burrows, wetlands and man-made structures such as nest boxes. A whopping 90 percent of habitat owners grow host plants for caterpillars, compared to only 8 percent of the neighbors and 4 percent of the owners at random locations. Teresa Chin, one of Widows’ interviewees, includes both host and nectar plants in her butterfly garden. Chin, who lives just east of Orlando, also has a tadpole pool where southern leopard frogs lay their eggs. Another CWH homeowner, Brent McCallister, leaves up snags for woodpeckers and has installed a bird house that is home to nesting screech owls. 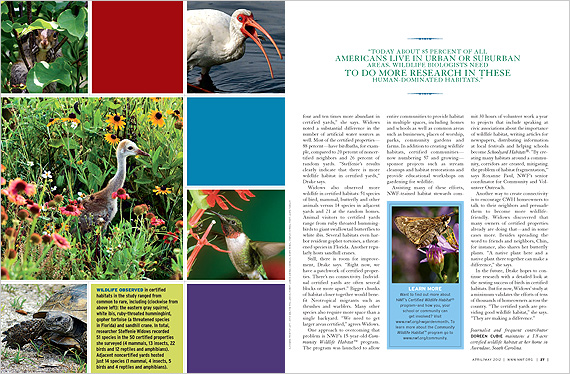 The most significant difference between certified and noncertified properties is in the amount of shelter or cover they provide wildlife, including dense shrubs, brush piles and evergreens. Widows’ research also found that berries, fruit, nectar, pollen and other natural food sources are twice as plentiful in NWF habitats. In addition, supplemental feeders are “between four and ten times more abundant in certified yards,” she says. Widows noted a substantial difference in the number of artificial water sources as well. Most of the certified properties—88 percent—have birdbaths, for example, compared to 20 percent of noncertified neighbors and 26 percent of random yards. “Steffenie’s results clearly indicate that there is more wildlife habitat in certified yards,” Drake says.

Still, there is room for improvement, Drake says. “Right now, we have a patchwork of certified properties. There’s no connectivity. Individual certified yards are often several blocks or more apart.” Bigger chunks of habitat closer together would benefit Neotropical migrants such as thrushes and warblers. Many other species also require more space than a single backyard. “We need to get larger areas certified,” agrees Widows.

One approach to overcoming that problem is NWF’s 15-year-old Community Wildlife Habitat™ program. The program was launched to allow entire communities to provide habitat in multiple spaces, including homes and schools as well as common areas such as businesses, places of worship, parks, community gardens and farms. In addition to creating wildlife habitats, certified communities—now numbering 57 and growing—sponsor projects such as stream cleanups and habitat restorations and provide educational workshops on gardening for wildlife.

Assisting many of these efforts, NWF-trained habitat stewards commit 30 hours of volunteer work a year to projects that include speaking at civic associations about the importance of wildlife habitat, writing articles for newspapers, distributing information at local festivals and helping schools become Schoolyard Habitats®. “By creating many habitats around a community, corridors are created, mitigating the problem of habitat fragmentation,” says Roxanne Paul, NWF’s senior coordinator for Community and Volunteer Outreach.

Another way to create connectivity is to encourage CWH homeowners to talk to their neighbors and persuade them to become more wildlife-friendly. Widows discovered that many owners of certified properties already are doing that—and in some cases more. Besides spreading the word to friends and neighbors, Chin, for instance, also shares her butterfly plants. “A native plant here and a native plant there together can make a difference,” she says.

In the future, Drake hopes to continue research with a detailed look at  the nesting success of birds in certified habitats. But for now, Widows’ study at a minimum validates the efforts of tens of thousands of homeowners across the country. “The certified yards are providing good wildlife habitat,” she says. “They are making a difference.”


Certified Habitats by the Numbers

Listed below is a breakdown of certified wildlife habitats by region. The two states with the most properties enrolled in the program are Florida (10,181) and California (10,586).

Celebrate Nature Through Photography!
Enter your photos in the 2012 National Wildlife Photo Contest >>