Are Other Animals Aware of Death? 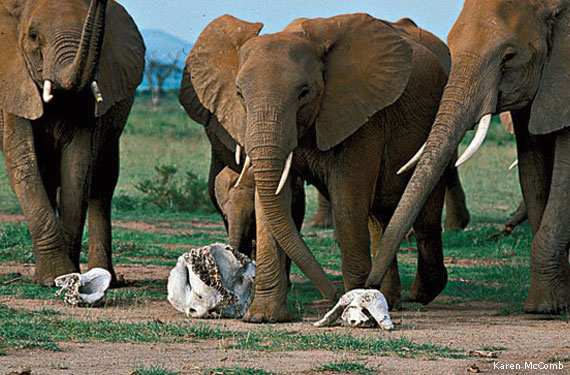 DEATH. SOME CALL IT THE GREAT EQUALIZER, putting pauper and prince on par. Its permanence and the sorrow it engenders may explain why human cultures across the globe have produced elaborate rituals for dealing with it. From Egypt’s ancient pyramids to Incan mummies to the modern American funeral home, abundant evidence exists to show that humans bear a special relationship to the dead.

A similar attitude toward the dead is not as clear in other species. In the early 1970s, anthropologist Ernest Becker wrote in his Pulitzer Prize–winning book Denial of Death that nonhuman animals know nothing about dying: “The knowledge of death is reflective and conceptual, and animals are spared it.”

But today, thanks to scientists investigating the origins of human behavior in nonhuman species, Becker’s view is becoming outdated. A growing body of evidence suggests that at least some species recognize death’s special nature. “I believe we are now justified in thinking that chimpanzees have some kind of awareness of death,” says psychologist James Anderson of Scotland’s University of Stirling, who has been studying chimp responses to the dying.

In one case, chimpanzees in a Stirling safari park reacted to the demise of an elderly female with behaviors that included tending to the dying chimp and, later, avoiding the place where the death occurred. The dead chimp’s daughter also conducted what Anderson calls a “vigil,” staying by the body the night the older female died. “At least they have some understanding of the irreversibility of the transition from being alive to being dead,” he says.

Intimations of a special reaction toward the dead appear in other species, but their significance remains elusive. Elephants commonly linger over the bones of their kind, especially tusks, becoming agitated and touching the remains with trunks and feet, which bear sensitive receptors. Crows and ravens sometimes gather around but rarely touch their dead, though they quickly eat the dead of other species. Orcas and bottlenose dolphins may try to keep dead calves at the surface of the sea, as if giving them a chance to breathe. Quite possibly, none of these behaviors means that the animal is “aware” of death. A dolphin trying to keep a dead baby afloat may even suggest a lack of such awareness.

Teresa Iglesias, a biologist at the University of California–Davis, studies how western scrub-jays gather in shrieking groups of 2 to 10 around dead birds of their own or other species. “The calls attract other scrub-jays, and they either join in calling or watch silently in the trees,” she says. Aggregations, which last from a few seconds to 45 minutes, don’t necessarily mean the birds understand death, Iglesias says. Perhaps aggregations fulfill another purpose: Seeing a dead bird and its surroundings may give jays (and perhaps crows and ravens) clues about risks to avoid.

Even if long-lived creatures as intelligent as elephants and chimpanzees do recognize that the dead are gone for good, they may not recognize that death eventually will come for all, a knowledge that may be solely human. Still, Anderson says, “Pining or grieving for a dead relative or friend is possible without any knowledge of death.” An important point, because if some species share our painful awareness of the permanent loss mortality brings, then death may be a greater equalizer than anyone previously suspected.