Keeping Wildlife on the Move 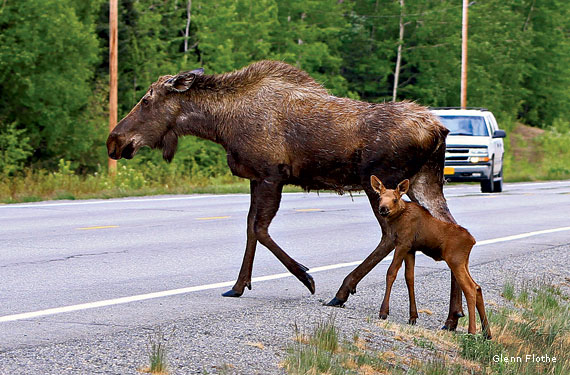 OF ALL THE WAYS HUMANS KILL WILDLIFE, traffic accidents may top the list. Millions of animals die each year after being hit by vehicles on U.S. roads. These unnatural barriers also fragment wildlife habitat, limiting animal movements and raising the risk of inbreeding and disease.

The human toll from vehicle-wildlife collisions is daunting, too. According to the Insurance Institute for Highway Safety, nearly 200 people a year die in such accidents in the United States, and damage from collisions with deer alone costs insurers nearly $4 billion a year.

Safe crossings designed for wildlife, such as bridges or underpasses, help stem the problem yet could cost millions of dollars, and deciding where to put those crossings can be tricky because many animals’ ranges are shifting due to climate change. “As forest habitat is altered and as the location of food changes, animals are increasingly on the move,” says Chris Hilke, senior manager of National Wildlife Federation’s Climate Adaptation program.

To address the problem, NWF has joined the Staying Connected Initiative (SCI, see video below), a partnership of conservation organizations and state and federal agencies in the Northeast and Canada. Its goal is to maintain and restore connected habitat for wildlife within 80 million acres in the Northern Appalachian–Acadian region.

This is the best example of habitat-connectivity work in northeastern North America, says landscape conservationist Phil Huffman of the Nature Conservancy in Vermont, a partner in the initiative. “It’s part of a growing recognition among scientists and conservationists of how important it is to factor in animals’ need to move around—both individually to find food, water and shelter, and as populations of species over time. It’s especially important that animals be able to adjust their ranges as the climate shifts.”

As part of the initiative, Vermont biologists, engineers and the state’s transportation department are using images from automatic camera traps to learn where and how animals cross roads. This information—creatively combined with conservation research and land-use planning—can be used to help wildlife travel safely.

The SCI team identified small but vital areas that serve as stepping stones for wildlife by linking larger blocks of forested habitat. Some of these key spots lie between Vermont’s Green Mountains and the Adirondacks to the west and White Mountains to the east, helping connect the woodlands that stretch from New York to Maine and Atlantic Canada.

To date, researchers have deployed 100 camera traps within two of these stepping-stone areas in Vermont, with 60 placed at bridges and culverts and 40 near a busy stretch of Interstate 89 between Burlington and Montpelier. This year, NWF will supply 24 more cameras to be installed along roads near northern Vermont’s Worcester Range.

The tens of thousands of images collected will help scientists identify those passageways most in need of critter-friendly retrofitting the next time roadwork is scheduled. “We want to find out what size culvert or bridge opening an animal will tolerate in order to go under a road,” says environmental specialist James Brady of Vermont’s Agency of Transportation, an SCI partner. “With access to this camera-trap data, we can ask, ‘Should we spend a little extra here [to modify a culvert] because it’s a perfect place for moose to cross underneath?’” 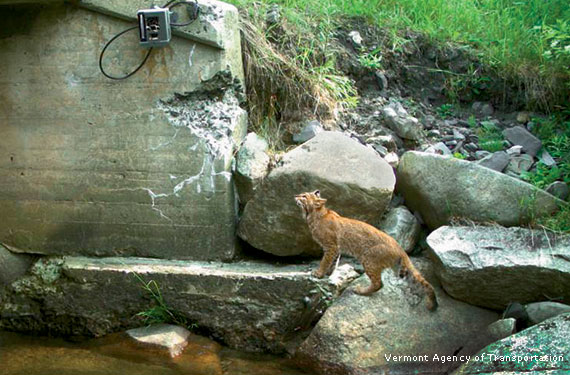 Up to five cameras are mounted on one structure, and infrared sensors detect motion and trigger the camera. “If there’s movement that is warm within 60 feet of a camera, it takes three pictures in a row,” says biologist Jens Hawkins-Hilke with the Vermont Fish and Wildlife Department. Cold-blooded creatures don’t trigger the cameras, but Vermont’s mammals do, notably moose, black bears, white-tailed deer, bobcats, coyotes, foxes, otters, fishers and minks. If a bobcat enters a culvert but stops and turns around, the multiple camera views will reveal its change of heart.

Preliminary findings from the camera traps include some surprises. For example, while otters are consummate swimmers, they’re more apt to use a culvert if they can scurry along some dry ground inside. And even a stately moose isn’t averse to ducking a bit in order to use a tunnel. “You’d assume an animal with a large rack of antlers needs a huge opening to feel comfortable passing through it,” says Brady, “but in reality, they’ll use an opening shorter than they are.”

The initiative’s efforts are already beginning to appear on the landscape. In November 2013, Vermont’s Agency of Transportation and Fish and Wildlife Department collaborated to retrofit a series of bridges beside their state’s Little River in Waterbury with wildlife “shelves” alongside the river, including one built from soil and sand left over from other highway projects. “Hoofed animals such as deer and moose don’t like to walk on rocks,” explains Hawkins-Hilke, “so this should entice them.” Indeed, fox prints were spotted on the ground by January 2014, and in May of that year, the cameras caught images of deer using the new trails.

Such adjustments are becoming more easily accepted by community planners since Tropical Storm Irene hit in 2011, Brady says, as they not only will help wildlife but also accommodate potential flooding. “The residue of that culture change has left more room for wildlife,” he says.


Doug Stewart wrote about the Great Marsh in the February/March 2015 issue.

See amazing photos and
enter your own in the 2015
National Wildlife Photo Contest!