Native, or Not So Much?

Native plants transformed into flashy “nativars” may look pretty, but are they good for wildlife? 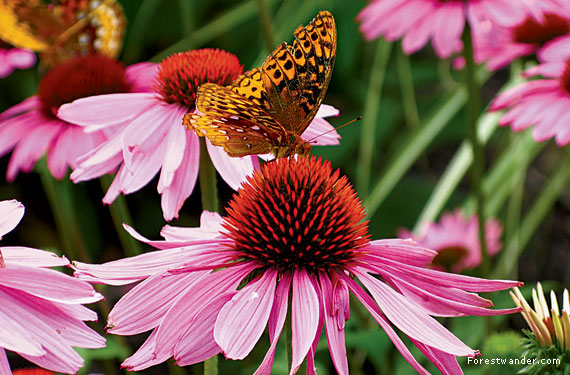 IT'S A HARD TO IMAGINE what butterflies and bees make of the Alice-in-Wonderland-like world of plants that pass as natives at nurseries these days. Bred for Day-Glo foliage, double flower heads, disease resistance and other atypical features, these cultivated varieties of native species, or “nativars,” are often the only native plants available at local garden centers—and that could be a problem for wildlife.

As research increasingly shows, native plants are key to creating a wildlife-friendly garden. By definition, a native plant (or “straight species”) occurs naturally in a given location or region. A nativar is sometimes a natural variant that has been found in the wild and brought into cultivation, but often it has been developed by a plant breeder and would never be found in nature. In the words of Doug Tallamy, a University of Delaware entomologist and author of Bringing Nature Home, the proliferation of nativars demonstrates the extent to which the nursery trade “is still stuck on the idea of plants as enhanced decoration” rather than as essential to wildlife. 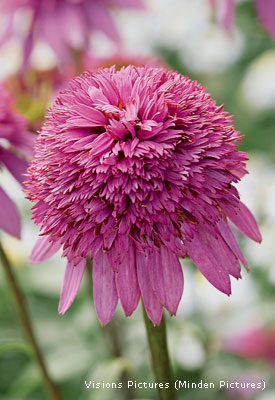 One clue that a plant is a nativar is a fancy, marketing-driven moniker like Razzmatazz (right) or Pink Double Delight, two double-flower variations on the native purple coneflower in which the flower’s brownish-orange central cone has been transformed into flashy pink pompoms. Botanical oddities like these may be highly regarded by the nursery industry, but it’s difficult, if not impossible, for bees and butterflies to gather pollen and nectar from double flowers. Such enhanced blooms can also be sterile and therefore unable to produce seeds—bad news for the goldfinches and other birds that relish these nutritious treats.

While radically tampering with a species’ flower structure often comes at the expense of wildlife, other popular nativar traits may be harmless or even beneficial. But how can gardeners interested in nurturing wildlife distinguish the good from the bad?

To help answer that question, Tallamy and colleagues at the University of Delaware have teamed up with researchers at the Mt. Cuba Center, a Delaware botanic garden specializing in native plants. As part of the project, Tallamy and graduate student Emily Baisden have been studying cultivated varieties of native trees and shrubs to learn how different traits affect the plants’ palatability to caterpillars (below), which are critical to the diets of breeding birds. 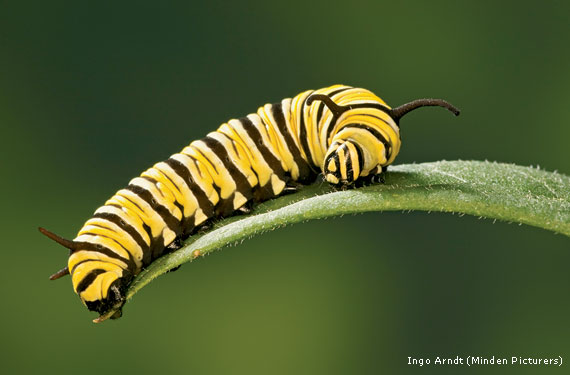 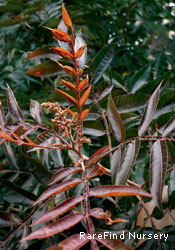 Although Tallamy calls the data they’ve collected during the past two years preliminary, some results are clear. For example, Lanham’s Purple shining sumac (right) and other nativars with purple leaves (a coveted trait among the horticulture cognoscenti) are not as attractive to caterpillars as the straight species with green leaves. Tallamy says this is likely because purple leaves are loaded with anthocyanins, chemicals that deter insect feeding. “It’s pretty clear that purple foliage goes in the negative column,” he says. 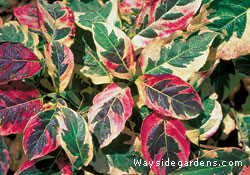 The evidence is less conclusive for variegated leaves (left), which are not uniformly green but rather have streaks or blotches of different colors. Such leaves contain less chlorophyll, the green pigment that enables plants to photosynthesize: employing sunlight to convert carbon dioxide and water into food. Presumably, the more variegation, the less nutritious the leaves are for wildlife.

According to Tallamy, however, tests of caterpillar feeding preferences produced mixed results. Spring bagworm larvae actually favored variegated leaves, although during the course of the growing season most caterpillars avoided them. As more data are collected this summer, Tallamy says, “maybe this will become more clear.”

Some nativars have larger or more abundant fruits, and these appear to be more appealing to caterpillars than the straight species. A prime example is the Chandler highbush blueberry, which produces huge berries the size of cherries.

Changes in plant size or “habit,” such as nativars that grow more compactly or more upright than straight species, “didn’t seem to make any difference to wildlife,” says Tallamy. Neither did nativars that are bred for disease resistance such as the Princeton elm. That’s good news for the American elm, which has been devastated by Dutch elm disease throughout its native range in the United States and Canada, and also for the growing number of other native trees suffering from blights introduced from abroad.

While disease-resistant nativars can be a boon for a plant decimated by blight, others can have a less salubrious effect on the genetic health of a species. By definition an atypical plant, a nativar represents just a sliver of a species’ genetic diversity. What’s more, to maintain their atypical traits, most nativars are propagated through cloning, such as by rooting cuttings, which produces genetically identical plants. When mass produced and overused in the landscape industry, they result in less genetic diversity than straight species propagated from seed, and therefore provide native plants with less capacity to adapt to stresses ranging from disease to climate change.

“It is a bad idea to load the landscape with plants that have no genetic variability,” says Tallamy. “I’m not a hardliner on this issue, but gardeners ought to have access to straight species. We have to convince the nursery industry that native plants are about more than just looks.”

Janet Marinelli wrote about tick-borne disease in the April-May 2016 issue.