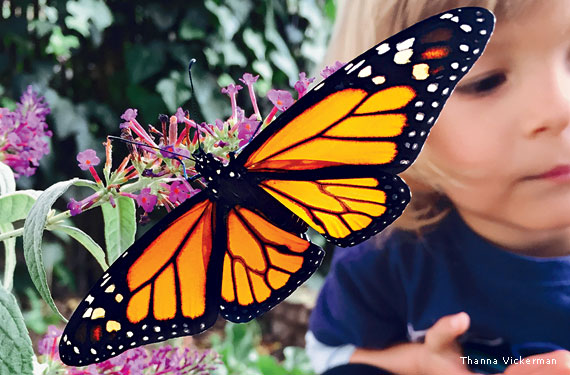 Hugo Stoffer (above) and his family in Los Angeles grow milkweed to nurture monarchs as part of NWF’s Butterfly Heroes™ campaign, which is supported by the Disney Conservation Fund. Disney maintains butterfly habitat (below) at several sites to spotlight conservation.


LAST APRIL, to celebrate its 20th anniversary, the Disney Conservation Fund (DCF) launched an ambitious new initiative called “Reverse the Decline, Increase the Time”—a boon to at-risk species around the world and a beacon of light for all who hope to see children embrace the joys of nature.

Disney is collaborating with nonprofit conservation groups and local communities to develop strategies to save 10 categories of endangered animals: elephants, tamarin monkeys, corals, sea turtles, rhinos, great apes, sharks and rays, cranes, tigers and butterflies. “Already the DCF has helped protect more than 300 species in 115 countries,” says Claire Martin, Disney’s senior manager for strategic philanthropy. “But by now focusing our passion on these 10 types of animals threatened with extinction, we can drive a more significant impact.” 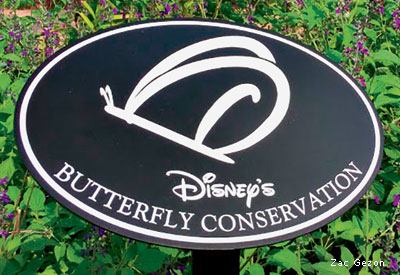 Hope on the Wing

Disney’s long-standing work with butterflies in Florida is already having significant impact—particularly for the native atala butterfly. Thought to have gone extinct after the decline of the coontie plant—the atala’s main host plant in Florida—this tiny butterfly was rediscovered near Miami in the late 1970s. To help rebuild the population, scientists and staff from Disney’s Animals, Science and Environment department began planting coontie and native nectar plants at Disney’s Vero Beach Resort. They also began to breed and hatch the butterflies at Disney’s Animal Kingdom, then launched a program at Vero Beach where guests can release atalas into restored habitat and help with butterfly counts. “We’ve seen multiple generations of these butterflies mating, laying eggs and flying around,” says Zak Gezon, the butterfly conservation program manager at Disney’s Animal Kingdom. “Guests find it magical to see kids releasing a native species that we thought was lost forever.”

Such engagement of kids with nature requires increasing their time outdoors, the second goal of DCF’s new initiative. “We need to inspire young people to take this work and carry it forward,” says Martin.

The National Wildlife Federations’ Butterfly Heroes™ campaign does exactly that by encouraging kids and families to plant and tend native plants that help monarch butterflies. “With Disney, we share a recognition that you can’t love what you don’t know,” says Kevin Coyle, NWF’s vice president of education. “With the indoor-childhood phenomenon being so pervasive, it’s important to come up with large-scale ways to reconnect children with nature.”

Disney’s support of Butterfly Heroes (www.nwf.org/butterflyheroes)—and thousands of other conservation efforts worldwide—may well yield a magic kingdom where wildlife thrives with help from each new generation.