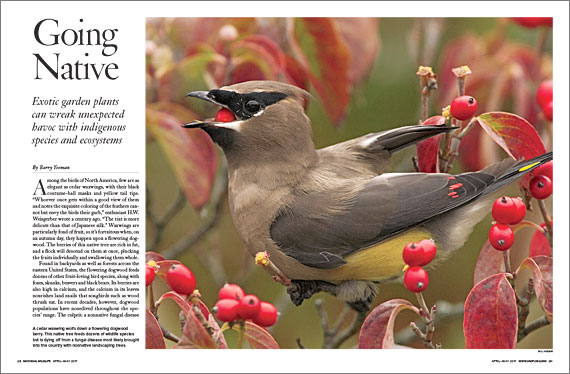 A cedar waxwing wolfs down a flowering dogwood berry. This native tree feeds dozens of wildlife species but is dying off from a fungal disease most likely brought into the country with nonnative landscaping trees.


AMONG THE BIRDS OF NORTH AMERICA, few are as elegant as cedar waxwings, with their black costume-ball masks and yellow tail tips. “Whoever once gets within a good view of them and notes the exquisite coloring of the feathers cannot but envy the birds their garb,” enthusiast H.W. Weisgerber wrote a century ago. “The tint is more delicate than that of Japanese silk.” Waxwings are particularly fond of fruit, so it’s fortuitous when, on an autumn day, they happen upon a flowering dogwood. The berries of this native tree are rich in fat, and a flock will descend on them at once, plucking the fruits individually and swallowing them whole.

Found in backyards as well as forests across the eastern United States, the flowering dogwood feeds dozens of other fruit-loving bird species, along with foxes, skunks, beavers and black bears. Its berries are also high in calcium, and the calcium in its leaves nourishes land snails that songbirds such as wood thrush eat. In recent decades, however, dogwood populations have nosedived throughout the species’ range. The culprit: a nonnative fungal disease called dogwood anthracnose. While there’s no definitive proof how the fungus landed on this continent, the prime suspect is kousa dogwood, a popular landscaping tree imported from Asia.

With big berries, flaky bark and an abundance of blooms, kousas are attractive trees. They also brush off anthracnose like we brush off the common cold. Sometime after kousa was first introduced to the United States by novelty-seeking nurseries in the 19th century, it likely unleashed the disease on defenseless native trees that had not evolved with the fungus. As Americans watched their flowering dogwoods die starting in the 1970s, landscapers encouraged them to replace the trees—with more kousas. “I don’t know a general in the U.S. military who could come up with a better invasion strategy,” says Kevin Heatley, an Ohio-based restoration ecologist. 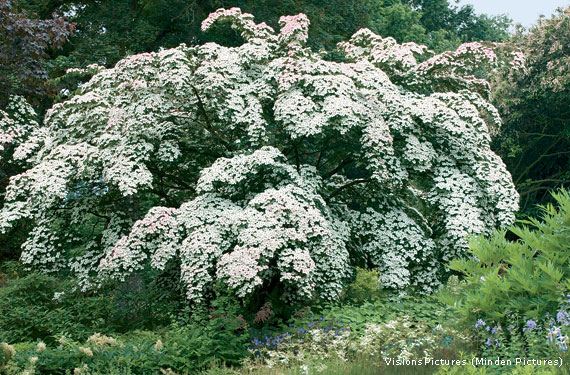 Kousa dogwood (above) was first imported from Asia in the 19th century. Unlike native dogwood fruit, kousa berries (below) are not eaten by native wildlife. “They’re not part of the food web,” explains one scientist.

Fewer flowering dogwoods means less food for fruit-feeding creatures, from waxwings to bears and foxes. The caterpillars of spring azure butterflies also miss out on a key food source. And kousa berries? They’re monkey food, which makes them valuable in Asia but not in North America. “Nothing eats them here,” says Doug Tallamy, a professor of entomology and wildlife ecology at the University of Delaware. “They’re not part of the food web.” 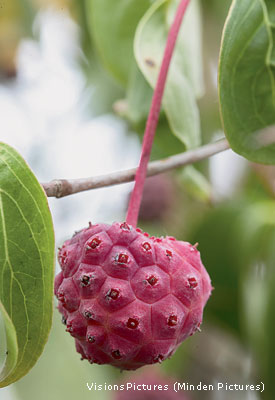 Kousa dogwood is just one of scores of exotic plants imported by the U.S. garden industry that have triggered widespread and unforeseen ecological damage. Hemlocks from Japan ferried in an insect called the hemlock woolly adelgid, which has destroyed native hemlock canopies in at least 17 states from Maine to Georgia, depriving streams of the cooling shade that brook trout need to survive. (The adelgid has invaded almost half of the native hemlock’s 2.3-million-acre eastern range.) Japanese knotweed, with its aggressive horizontal stems, has crowded out indigenous vegetation eaten by invertebrates, and scientists suspect the loss of these animals may, in turn, be starving green frogs. Autumn olive, a woody shrub, has taken over grasslands, making it harder for birds such as grasshopper sparrows and bobolinks to nest successfully.

We don’t know what the next invader will be. But we can guess it will pass into the country unimpeded. That’s because the United States has a feeble system of regulating garden imports. Each new species is presumed harmless until proven otherwise—and by the time a verdict arrives, the harm is often beyond repair.

The United States uses a modified blacklist system. The U.S. Department of Agriculture (USDA) maintains a list of 112 “noxious weeds” deemed risky to crops, livestock and the environment. There is also a small “graylist” of plants, identified by USDA scientists, that could potentially cause harm and are temporarily barred until they can be evaluated. Otherwise, new plants that arrive at American ports of entry are allowed into the country if they pass a U.S. Customs and Border Protection inspection, which looks for nonnative pests like insects and mites as well as pathogens like fungi and bacteria.

The problem with this system, say some scientists, is that it permits many potential invaders to escape scrutiny. “Blacklists are generally species by species,” says Dan Simberloff, an ecologist at the University of Tennessee–Knoxville. “They’re very piecemeal, and there are thousands and thousands of species.” For most new exotic plants, “it’s a carte blanche,” he says, “even though we haven’t even given a thought to whether they’d likely be invasive.” 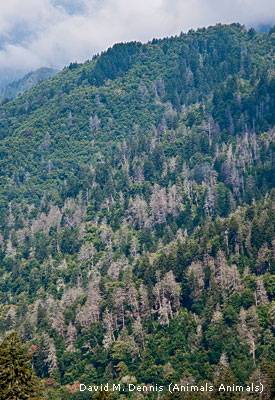 By contrast, Australia and New Zealand use whitelists that keep out all new exotic trees and other plants until they’ve been cleared as low risk (with importers footing the bill for the assessments). “They have some of the world’s most unique flora and fauna, and they have every business to protect it,” USDA botanist Indira Singh says of these two countries. “There’s no garden in the world that’s worth endangering millions of years of evolution.”

Advocates of a whitelist system say the same precautionary principle should apply to the United States. “When you introduce a plant, it is often decades before it exhibits its invasive qualities,” says Tallamy. “The way introduced plants have behaved so far, it’s much safer—and it’s the only practical thing—to consider them guilty until proven innocent.”


Killed by the hemlock woolly adelgid—an insect brought to the country with trees imported from Japan—dead native hemlocks stretch up a hillside in Tennessee’s Great Smoky Mountains.

Such an approach could be a hard political sell, however. Whitelists would likely meet resistance from both free-trade advocates, who see such lists as trade barriers, and the horticulture industry, which thrives on variety. “In concept, it seems like a great idea,” says Gregg Robertson, a lobbyist for the Pennsylvania Landscape & Nursery Association. “But nobody has the resources to test all the plants that possibly could be tested.” Craig Regelbrugge, senior vice president for the industry group AmericanHort, argues that if the government imposes sweeping import restrictions, “you’re going to have bad actors smuggling stuff in in their socks.”

But Heatley says the consequences of “taking biota from different ecosystems and mixing and matching them” are too “staggering” not to overhaul the regulatory system. “When you come down to it, we’re talking about decorating,” he says. Suburban yards are often modeled after historic American estates: large expanses of lawn dotted by trees chosen for color and texture rather than ecosystem value. “The pursuit of a certain neoclassical turf-and-trees aesthetic is putting some of our foundational ecological systems at risk.”

Heatley and I first met in Louisiana’s Barataria Preserve in 2010, when he was overseeing an ongoing project to bulldoze the Chinese tallow trees that had overrun the 23,000-acre wetlands. “Biological pollution,” he calls the trees. With diamond-shaped leaves that turn burgundy in the fall, tallows were once considered desirable ornamentals. Then the trees took over native ecosystems—altering the soil chemistry, shading out sun-loving plants and degrading habitat for bird species like the red-bellied woodpecker and ruby-crowned kinglet.

Among the places tallows have invaded are Louisiana’s cheniers, coastal ridges that migratory birds use as stopovers. “Their sap is toxic, and they hold a lower number of insects than native trees,” says Michael Baldwin, an ecologist with the U.S. Geological Survey. “From a distance, they might look like a good resting point, but in reality they might be an ecological trap.”

Other exotics, like autumn olive, conquer disturbed settings such as old pastures and highway-construction sites. “They’re so tough that they can grow in just about any environment,” says Ellen Nibali, a horticulturist at the University of Maryland Extension. “You drive down the road and you should see eastern red cedar or dogwoods coming up—sassafras and persimmon and all kinds of native plants. Instead you’ll see autumn olive and euonymus and barberry—a huge assortment of foreign weeds.”

One of those weeds, Japanese barberry, remains popular among some commercial gardeners: “the backbone of most of their bland, cookie-cutter landscaping sites,” writes Jesse Elwert Peters, a garden design consultant in Saratoga Springs, New York. Because barberry is unappealing to caterpillars, the plants create a “protein desert” for birds, which need these insects to feed their young during the breeding season, says Jeffrey Ward, chief scientist at the Connecticut Agricultural Experiment Station’s forestry and horticulture department. Barberry also produces the humid microclimates favored by deer ticks that transmit Lyme disease. “It’s a real public-health issue to be having these invasive shrubs out there in the woods,” Ward says. 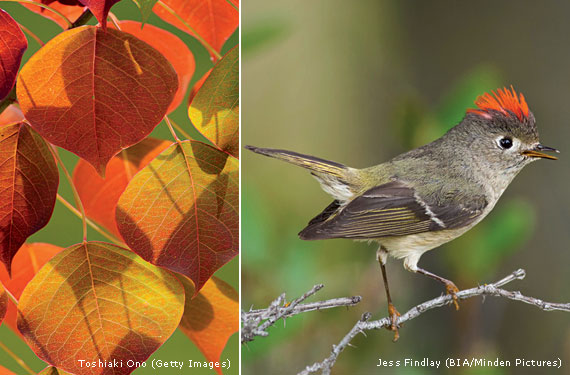 Lovely to look at, Chinese tallow trees (left) were popular U.S. ornamentals—until they began overtaking native ecosystems. These exotic trees have altered soil chemistry and degraded habitat for the ruby-crowned kinglet (right) and other bird species.

Japanese barberry, autumn olive, Chinese tallow, Japanese knotweed, kousa dogwood—all are products of a permissive import system. They are also products of a conventional wisdom that says garden plants don’t need to be part of the local food chain. Ecologists say this ethos must change; residential landscapes need to help compensate for shrinking wildlife habitats and diminished food sources in the wild.

“People tend to view the natural world as separate from the human world,” Heatley says. “Our landscape aesthetic supports that mindset: ‘We live over here, and nature’s on that side of the fence.’ But nature is where you live.”

Through its Garden for Wildlife™ program, the National Wildlife Federation has long urged homeowners and others to cultivate plants native to their region. Not only are nonnative landscaping species risky—with the potential to escape and cause harm to ecosystems—they do not provide the food that local wildlife need.

Recently, the Federation launched a new tool for computers, tablets and smartphones that helps gardeners pick by zip code the best native plants for wildlife in their specific area. See www.nwf.org/nativeplantfinder.

NWF also helps schools and community organizations plant native species through its Trees for Wildlife™ program. During the past decade, this program has planted more than a quarter-million native tree seedlings nationwide. To learn more, visit www.nwf.org/trees.


Barry Yeoman is a freelance journalist based in Durham, North Carolina.