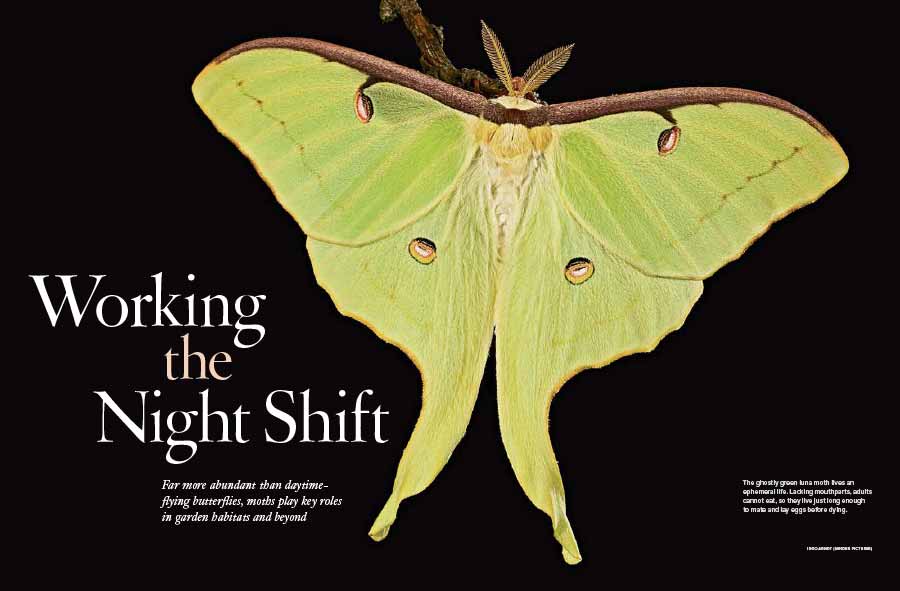 NESTLED IN THE CORNER of a backyard garden, a hungry caterpillar nibbles on the edge of an evening primrose leaf. More than 2 inches long, the larva’s matte-black body is adorned by neon-yellow dots and stripes, accented at both ends by metallic orange and topped by a single black-and-orange spine. Fattening up fast, the caterpillar soon will be ready to transform into a winged adult—but not into a butterfly as most people might expect. Instead, this eye-catching creature is the larva of the white-lined sphinx moth, an equally striking, fist-sized insect propelled by pink hindwings that flutter so fast it is often mistaken for a hummingbird.

“Butterflies get our attention because they are active during the day, and most of them are brightly colored,” says National Wildlife Federation Naturalist David Mizejewski. “But moths also are all around us, and they can be equally beautiful if we just take a closer look.”

Moths in fact are far more abundant than butterflies, with roughly 14,000 species in North America and more than 150,000 worldwide. “For every species of butterfly on the planet, there are 19 species of moth,” says University of Delaware entomologist Doug Tallamy. He adds that scientists as well as lay people have favored butterflies over moths, so the insects remain  relatively unstudied.

Because moths play vital roles in most of the world’s terrestrial ecosystems, they deserve much more attention. As flying adults, for example, moths pollinate a large number and variety of plant species. When other insects go to sleep, moths work the night shift, visiting some of the same flowers as diurnal pollinators but also night-blooming plants that daytime fliers miss. Voracious eaters, moth caterpillars return important nutrients to the soil through their feces. And moths are a significant source of food. “Due to their sheer numbers in the landscape, moths and their caterpillars provide a critical food resource for a vast number of wildlife species,” Mizejewski says. 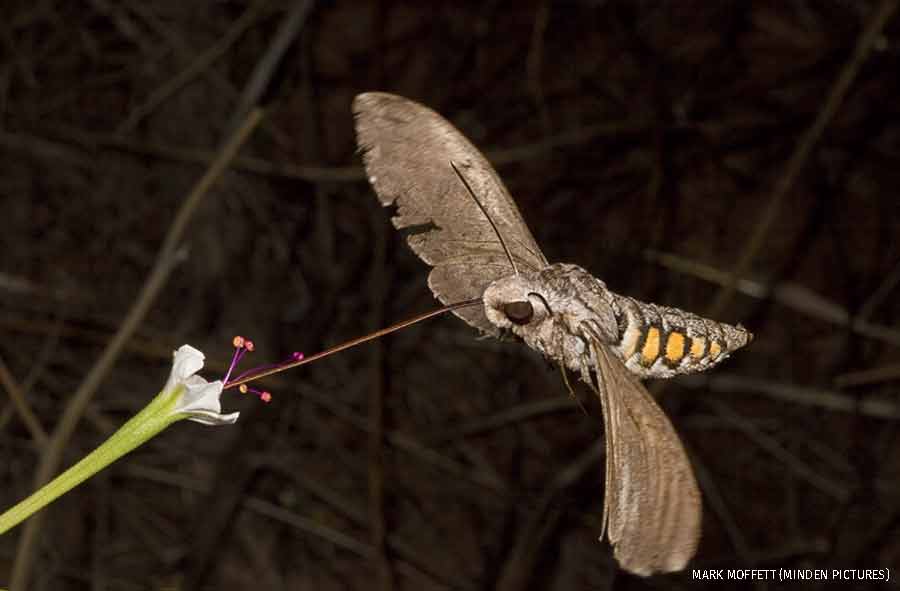 Moths and butterflies both belong to a large order of insects, Lepidoptera, a name that refers to the tiny scales covering the wings of most of these insects. Each group has evolved its own unique set of traits. The best known, of course, is that most butterflies are diurnal while moths fly at night. But some moths, particularly brightly colored species such as the hummingbird clearwing and Virginia ctenucha moths, also fly during the day. Moths’ bodies generally have more scales than those of butterflies, which makes them look fuzzier. When resting, butterflies hold their wings open, exposing all four, while moths tend to cover their hindwings with their forewings. And while butterfly antennae end in hooks or clubs, moth antennae are either feathery or end in tapered tips—an adaptation they use to locate host plants and to detect the chemical signals, or pheromones, of other moths from hundreds of yards away.

Within the moth group, scientists have discovered a world of variation in size, shape and color. The smallest moths, members of the family Nepticulidae and known as micro moths, could individually fit onto the head of a pin. These tiny insects have hindwings that look like feathers, and they feed not on nectar but on honeydew, a sugary liquid waste produced by aphids.

The largest moths—and among the most spectacular—belong to the family Saturniidae, or giant silk moths. Io, polyphemus, promethea, luna and cecropia (with a 6-inch wingspan, the biggest moth in North America) are among nearly two dozen species of silk moth native to this continent. Perhaps the most striking among them is the ghostly green luna moth with its 3-inch-long sweeping tails. Like other silk moths, luna moths lack mouthparts, so they cannot feed and live only a few days as winged adults—just long enough to mate and lay eggs.

Though most people think of moths as being brown, and indeed many are, a surprising number of the insects are as colorful or intricately pattered as butterflies. Among them are the tiger and lichen moths, with species such as the giant leopard moth, which looks like a winged dalmatian. Others display brilliant hues, including the arid eudesmia moth, with its thick, black-and-orange stripes, and the appropriately named scarlet-winged lichen moth, whose wings sport vivid, red-and-black streaks. Even brown moths, if examined closely, display complex patterns on top of varying shades of chocolate, mahogany and chestnut. 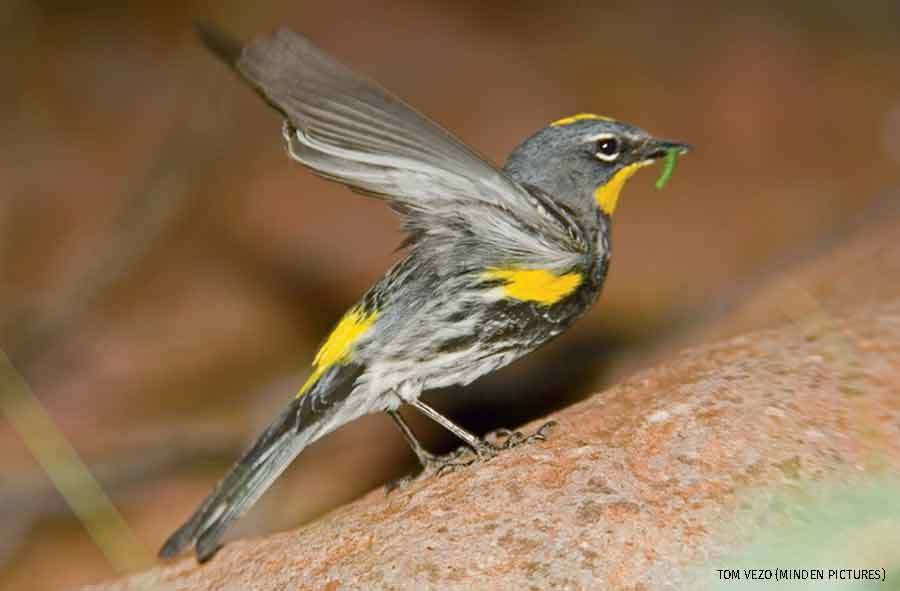 A yellow-rumped warbler ferries a caterpillar to its nest; 96 percent of terrestrial birds rear their chicks on insects, primarily moth caterpillars.

An astonishing variety of wildlife species eat moths. “Not only do birds and bats consume moths at every stage of the insects’ life cycle, so do lizards, small rodents, skunks and even bears,” Mizejewski says. Other insects, including hornets and ants, prey on moth caterpillars, and both spiders and beetles feed on moth pupae tucked away in their cocoons. Many wasp species sting and paralyze both caterpillars and pupae, depositing the live prey in underground chambers for their own larvae to eat. One species of predatory beetle has even synchronized its life cycle to match that of the gypsy moth, laying eggs only after the moth’s caterpillars are available to feed its young.

But perhaps no wildlife rely more on moths for food than do birds during the breeding season. Contrary to what many people believe, “most birds do not reproduce on berries and seeds,” Tallamy says. “Ninety-six percent of all terrestrial birds rear their offspring on insects, primarily the caterpillars of moths.” Even birds that typically eat seeds will switch to insects when they are rearing chicks. Compared to other insects, he says, “caterpillars are relatively large prey. It would take 200 aphids to equal the biomass of a single medium-sized caterpillar.” These soft insects also provide large amounts of fat and protein without much of the hard-to-digest chitin that insects such as beetles contain. And for successful nesting, birds need a lot of caterpillars. Carolina chickadees, for example, require 6,000 to 9,000 caterpillars to rear a single clutch of four to six offspring.

Bats are perhaps the most well-known predators of adult moths, though some moths have evolved tricks to evade the predators. When bats produce clicks to echolocate prey, the Grote’s bertholdia moth, for instance, responds with clicking sounds it produces so fast that they interfere with the bats’ own clicks. Many tiger moths can hear echolocation clicks as a bat approaches, giving the insects time to change direction, loop or zigzag through the air or drop quickly to the ground. 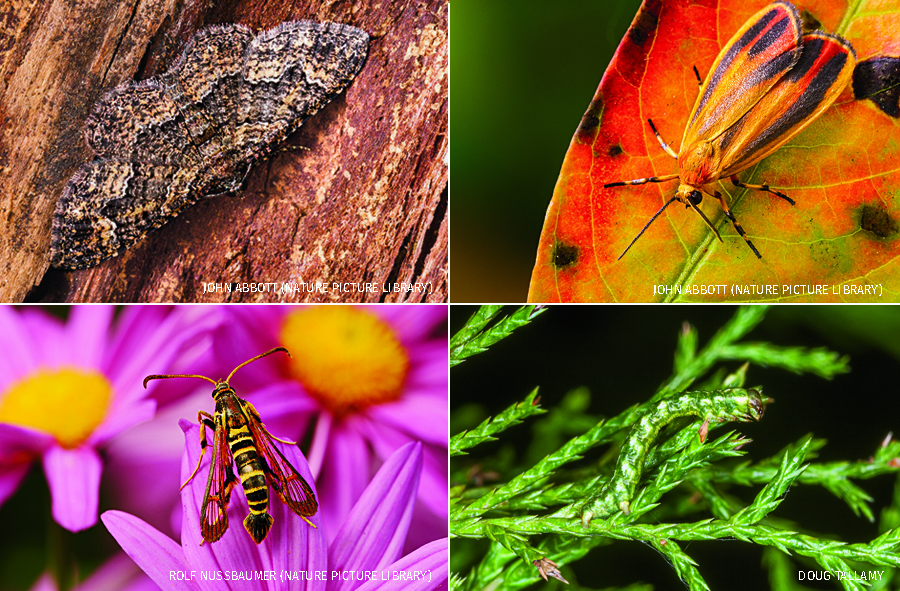 To hide from or fool predators—from bats and bears to other insects—many moths are masters of camouflage and mimicry, including (clockwise from top left) the somber carpet moth, painted lichen moth, curve-lined angle caterpillar and clearwing borer moth.

Given the many species that prey on moths, it’s not surprising that the insects have evolved an impressive number of adaptations for defense. Hiding in plain sight using camouflage is one approach. The brown wings of the variable metallata moth, for example, end in pointed tips, with a dark line running from wingtip to wingtip that makes it look like a fallen leaf. The beautiful wood-nymph’s black-and-white wings resemble bird droppings. And the mottled green, white and brown wings of explicit arches moths make these animals virtually invisible when they perch on lichen. Other moths are remarkable mimics of dangerous insect species. Take the grape root borer, whose slender body looks convincingly like that of a paper wasp, right down to the orange, yellow and black stripes on its abdomen.

Caterpillars are no less adept at hiding in plain sight. Some in the genus Tetracis look like broken twigs when they perch on a branch, while the checkered fringe prominent caterpillar is a dead ringer for a decaying leaf edge. Others do not need to rely on camouflage because they are distasteful or irritating: While the larvae of southern flannel moths look tiny and innocuous, they produce an aggravating, itchy rash. A few species have developed truly unique defenses. If a bird tries to eat the larva of the polyphemus moth, for example, the caterpillar vomits a foul liquid.

Such tricks and disguises intrigue many naturalists. “Moths provide a perfect window into the miraculous diversity of nature, one that is hidden from most observers yet can be accessed with relatively little effort,” says Lars Crabo, a medical doctor and moth expert who contributes to the online guide Pacific Northwest Moths. To start observing moths, Crabo suggests leaving an outside light on in front of a white sheet. “I’ve found some interesting things in my own backyard,” he says. And because moths are so little studied, Crabo adds, such backyard observations may reveal species that are new to science.

This summer may be an ideal time to begin moth watching. Long the underappreciated members of the Lepidoptera, moths will be getting their due during National Moth Week from July 21 through July 29, 2018. One of the goals of this annual event, organizers say, is “to promote the understanding and enjoyment of moths”—giving these nocturnal creatures, at last, a well-deserved “day” in the sun.

How to attract and nurture moths

You don’t need a lot of space to attract an amazing diversity of moths to your garden. Here are a few tips:

Plant larval food. Perhaps the most important way to attract and nurture moths is to provide host plants for the insects’ caterpillars. Some species are particular and will feed only on one family or even a single species of plant. Caterpillars in the sphinx moth family, for example, require snowberry, viburnum or blueberry.

Cultivate native nectar. When considering flowering plants for nectar, look for those with long tubular flowers. Night-blooming plants are important for some moth species. Be sure to grow a diversity of plants to ensure your yard offers continuous blooms from spring through autumn.

Be a lazy gardener. In autumn, leave your leaves on the ground and dead vegetation standing. Both will shelter moth eggs, caterpillars, cocoons and adults during winter. If you must clean up, transfer leaves and other dead plant material to an unused corner of your yard or flower bed instead of bagging or shredding them.

Turn off the lights. At night, switch off unnecessary outdoor lights. Moths that become trapped by light beams will waste valuable time that could be spent foraging or looking for mates.

Kelly Brenner is a Seattle-based naturalist.

7 Moths that Make Butterflies Look Boring »
Enjoying the Nightlife »
Wildlife-Watching at Night: Five Species You May Spot in Your Backyard »
Beyond the Bee: Unusual Pollinators »
Plant and Create Pollinator Habitat Gardens »
Growing a Better Birdfeeder »