Clever and charismatic, red foxes can thrive alongside human neighbors—and scientists are enlisting volunteers to find out how 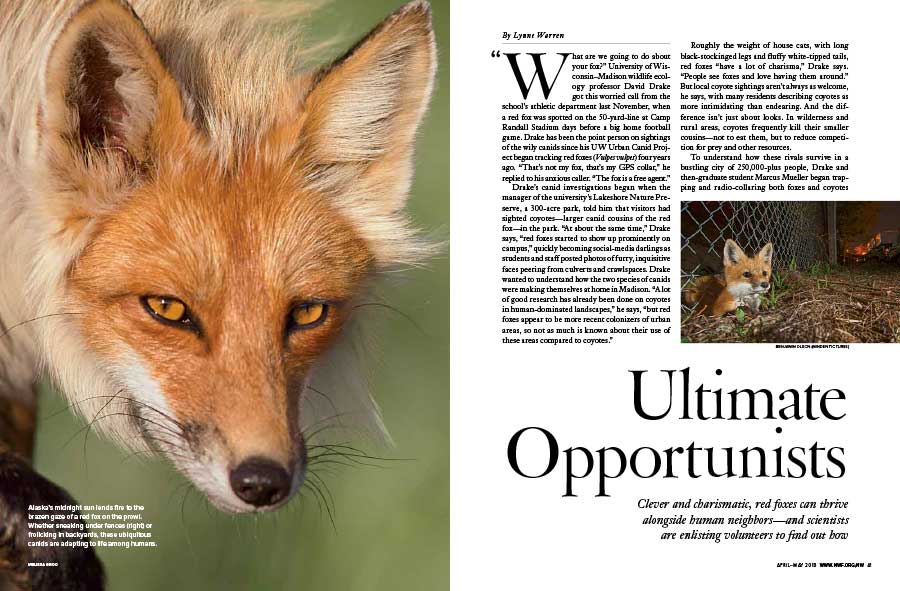 Alaska’s midnight sun lends fire to the brazen gaze of a red fox on the prowl. Whether sneaking under fences (right) or frolicking in backyards, these ubiquitous canids are adapting to life among humans.

“WHAT ARE WE GOING TO DO ABOUT YOUR FOX?” University of Wisconsin–Madison wildlife ecology professor David Drake got this worried call from the school’s athletic department last November, when a red fox was spotted on the 50-yard-line at Camp Randall Stadium days before a big home football game. Drake has been the point person on sightings of the wily canids since his UW Urban Canid Project began tracking (Vulpes vulpes) four years ago. “That’s not my fox, that’s my GPS collar,” he replied to his anxious caller. “The fox is a free agent.”

Drake’s canid investigations began when the manager of the university’s Lakeshore Nature Preserve, a 300-acre park, told him that visitors had sighted coyotes—larger canid cousins of the red fox—in the park. “At about the same time,” Drake says, “red foxes started to show up prominently on campus,” quickly becoming social-media darlings as students and staff posted photos of furry, inquisitive faces peering from culverts and crawlspaces. Drake wanted to understand how the two species of canids were making themselves at home in Madison. “A lot of good research has already been done on coyotes in human-dominated landscapes,” he says, “but red foxes appear to be more recent colonizers of urban areas, so not as much is known about their use of these areas compared to coyotes.”

Roughly the weight of house cats, with long black-stockinged legs and fluffy white-tipped tails, red foxes “have a lot of charisma,” Drake says. “People see foxes and love having them around.” But local coyote sightings aren’t always as welcome, he says, with many residents describing coyotes as more intimidating than endearing. And the difference isn’t just about looks. In wilderness and rural areas, coyotes frequently kill their smaller cousins—not to eat them, but to reduce competition for prey and other resources.

To understand how these rivals survive in a bustling city of 250,000-plus people, Drake and then-graduate student Marcus Mueller began trapping and radio-collaring both foxes and coyotes and tracking their habitat use. Mapping 5,729 total locations for 11 coyotes and 12 red foxes during two years, Mueller found that deadly confrontations between the two species were rare in Madison. While coyotes kept primarily to more-natural areas where human activity was limited, foxes preferred residential neighborhoods. “Foxes foraged, traveled and even raised pups in people’s backyards,” he says. In fact, those yards are where nearly all of the foxes studied in the project have been trapped. “That means we really depend on the public for access,” Drake says. 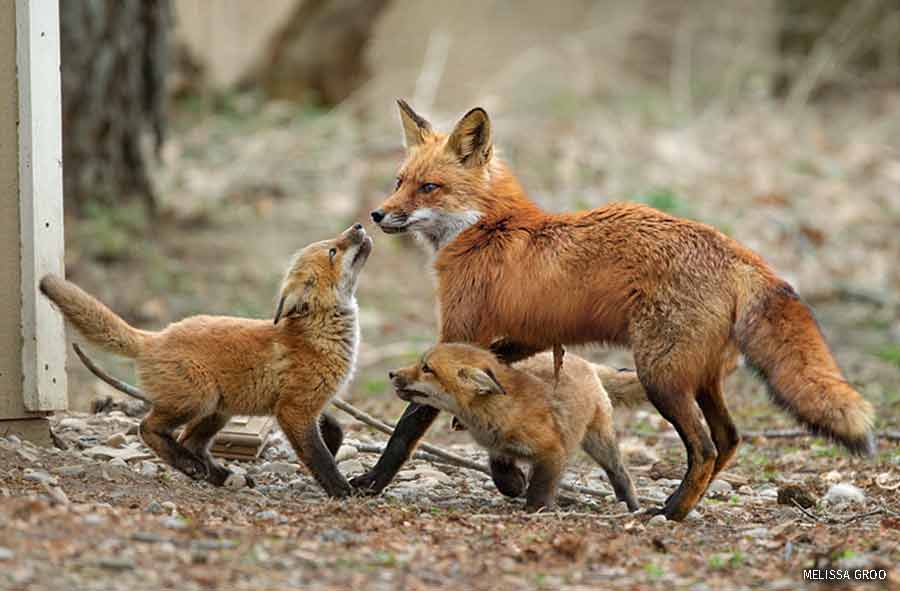 Ever the attentive papa, a male red fox joins two of his six kits as they eagerly greet his return from a hunt. This fox family made its den under a backyard shed (below) in Lansing, New York, where photographer Melissa Groo documented the “enchanting” clan.

At first, the research team was simply asking for permission to work on private property, where residents were protective of their wild visitors. One woman referred to “her” foxes, Drake recalls. “She said, ‘You’re not going to do anything to cause them to leave, are you?’ Turns out the foxes were keeping rabbits out of her garden, and she was getting better harvests than she’d ever had.”

To allay concerns about the animals’ welfare and multiply his canid spotters, Drake invited community members to become part of the research. To date, about 500 people have joined the scientists in checking traps, weighing and measuring animals, collecting blood and other samples and fitting tracking collars. Roughly half the volunteers have come from campus, including veterinary students seeking wildlife-handling experience, and half from the general public. “Our volunteers are a real mix,” Drake says. “We’ve had individuals and families, young kids, even an 82-year-old woman come out with us.”

Virtual participation is welcome, too. Using the iNaturalist online platform, some 800 local observers have contributed canid-sighting data, including more than 600 red fox reports. The reliability of these data is assessed by comparing them with telemetry results from collared animals. Drake says radio-tracking locations and iNaturalist reports for red foxes are a match about 62 percent of the time, giving the researchers confidence in their collaborators. “These animals live among the public,” says Drake. “Involving the public in studying them has been more beneficial than I could ever have imagined.”

Devising efficient ways to study red foxes is increasingly valuable to wildlife researchers and managers. As human development consumes habitat, wild creatures either disappear or learn to live in close quarters with people. The most widely distributed carnivores on Earth, red foxes are so adaptable that they flourish across the Northern Hemisphere and Australia, and scientists have found significant populations in more than 100 major cities worldwide.

Life with encroaching humans isn’t all bad for foxes. Where people are numerous, fox food—from rats and mice to garden produce and garbage—is also abundant. Drake describes the foxes tracked so far as being “in really good body condition.” Most weigh 12 to 13 pounds at capture; 7 to 14 pounds is common for the species. “They’re definitely not hurting for meals,” he says.

Starvation may be unlikely for urban and suburban foxes, yet other hazards loom large—and people are involved there, too. The mean lifespan of Vulpes vulpes is only about a year. Some 40 percent of foxes in both urban and rural areas die on roads and highways, and about a third of neighborhood foxes nationwide are euthanized, either because they’ve been identified as “nuisance” animals or because they’re suspected of being rabid (though positive rabies tests in urban foxes are rare, and virtually all cases of wildlife-to-human rabies transmission in the United States involve bites from bats).

To help reduce such human-wildlife conflicts, Drake and his team recently launched a new website: urbanwildlifeproject.wisc.edu. “Our goal is to give our users solid, science-based strategies for peaceful coexistence with foxes and other animals,” he says, “and to connect them with other great tools, like the National Wildlife Federation’s Certified Wildlife Habitat® program, which encourages homeowners to provide resources that wildlife need in ways that are safe for people and animals.”

The researchers are not done investigating the lifestyles of their furry neighbors, either. Drake hopes to learn how urban fox diets compare to those of country kin and how city living affects the dispersal of juveniles. “I suspect the kits don’t leave town,” he says. Young males may later seek out new, unoccupied territory in the city, adds Drake, “but there’s so much we don’t know.”

So whatever happened to the fox that threatened the big football game? “Stadium Fox continues to be seen in the area pretty regularly,” Drake says, “but it did not disrupt the victory over Iowa that day.” 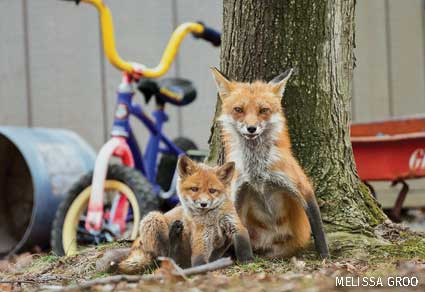 Scientists have found that living close to humans helps red foxes avoid confrontations with other predators—especially coyotes. Here are a few ways to keep the neighborhood healthy for humans and foxes alike:

Shut down the snack bar. Expecting handouts reduces an animal’s natural fear of humans and can encourage risky behavior. Foxes that feed on garbage also often ingest plastic and other debris, which can be deadly, so make sure to secure trash can lids. Clean up seed from around bird feeders, and don’t feed your pets outdoors.

Don’t fear the fox. Red foxes hunt prey such as rabbits, chipmunks and mice that are active in daytime. Seeing a fox in daylight doesn’t mean the animal is rabid; it just means it’s on its regular rounds, so enjoy the show.

Set boundaries. After mating in winter, red foxes seek out snug dens where females birth and nurse their kits. Males tend to scent mark around the den, which can get stinky. If you’d rather discourage a den, block off access to crawl spaces and areas under porches and sheds.

Respect family time. Foxes raise their kits in spring and summer, teaching them to navigate the world. They’re not aggressive toward humans, but they are protective parents. If you have a fox family nearby, watch them from a distance and keep pets and children away from the den.

Protect poultry. In addition to foxes, many animals—such as cats, snakes, owls, hawks, raccoons and coyotes—prey on poultry. If you keep backyard chickens, put your flock to bed in a secure coop surrounded by fencing that extends at least a foot below ground.

Avoid rodenticides. If you control rodents with poisons, you’re putting foxes and other predators at risk.