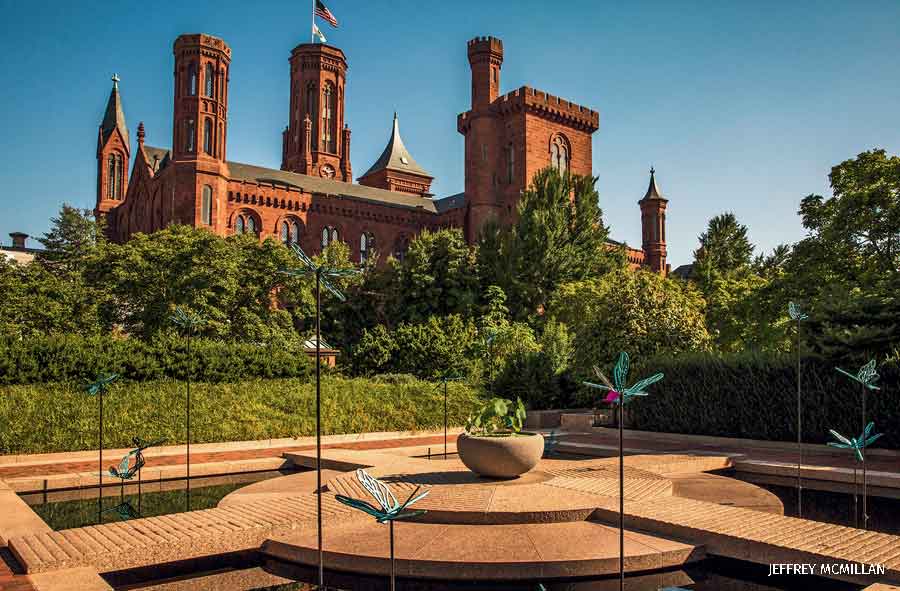 The sounds of a waterfall and chirping birds in Washington, D.C., drowned out the noise of traffic on a bright September day last fall during a dedication ceremony for the Smithsonian Gardens’ Certified Wildlife Habitat®. Called “Habitat," this new offering, which will run through the end of 2020, includes 14 exhibits spread throughout the Smithsonian campus’s 45 acres of gardens.

At an exhibit tour, National Wildlife Federation President and CEO Collin O’Mara joined then Smithsonian Gardens Director Barbara Faust to plant the CWH sign at the National Museum of Natural History’s Pollinator Garden. All sites in the exhibition use plants, natural structures and water features to help wildlife, and signs to educate the public. 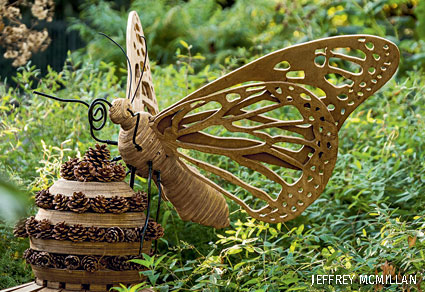 A “Bug B&B” in the pollinator garden, for example, provides habitat for insects in the form of wooden sculptures (pictured) filled with natural materials for shelter. The “Dead Wood is Life” exhibit outside the National Museum of American History highlights the benefit of dead wood and leaves to provide habitat and cover for insects, and the Moongate Garden outside the Smithsonian Castle (top) features metal dragonflies flying over a fountain and signs that explain the role of dragonflies to indicate wetland health.

In an urban area such as D.C., these gardens provide much-needed biodiversity. “It’s amazing how many birds find this tiny one-third of an acre,” says Janet Draper, head horticulturist of the Mary Livingston Ripley Garden, one of the 14 sites.

“Habitat” is the first campus-wide exhibition for the Smithsonian, a huge win for Faust’s team as they strive to make their presence known. “We wanted to show we are a force to be reckoned with, just like any museum,” says Faust. “I want us to be a destination just like going to see the dinosaurs and the rockets.” 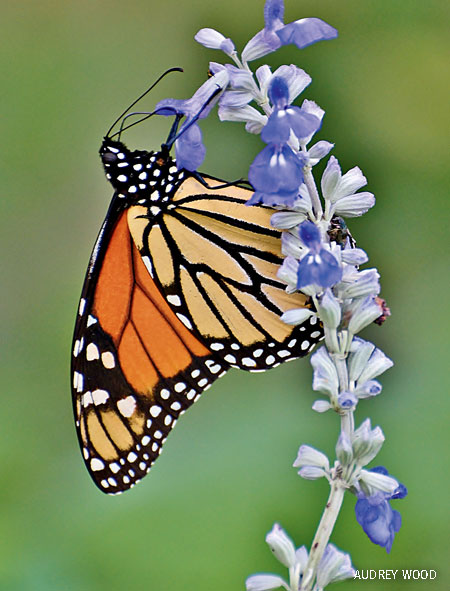 As Texas Conservation Alliance (TCA) enters its 50th year, this NWF affiliate has a lot to celebrate. In 2019 alone, it saw two of its long-term projects come to fruition.

In August, TCA oversaw the public-access grand opening of the Neches River National Wildlife Refuge in East Texas, a 7,000-acre sweep of bottomland hardwood trees and wetlands that provides important wintering grounds for waterfowl. TCA began its campaign in 2004, eventually soliciting 20,000 signatures showing public support for the refuge designation. Since then, the group has built public- access trails and regularly works to maintain them.

TCA also oversaw the opening of the Sabine Sandbar Paddling Trail in East Texas, a 15-mile haven for kayakers, anglers and sightseers. This effort involved a three-year collaboration with the Texas Parks and Wildlife department, community partners and others. “The trail has gorgeous, gleaming sandbars,” says Janice Bezanson, executive director of TCA. “And the sandbass run in the wintertime is a really big deal for fishermen.”

Another big win: Due to a ballot initiative TCA helped organize in 2019, sales tax from sporting goods will now go to public-lands agencies, helping TCA continue its work protecting habitat. On a broader scale, as Texas is a migration corridor for monarchs (above), TCA works closely with NWF to promote monarch habitat, generating hundreds of Certified Wildlife Habitats a year. 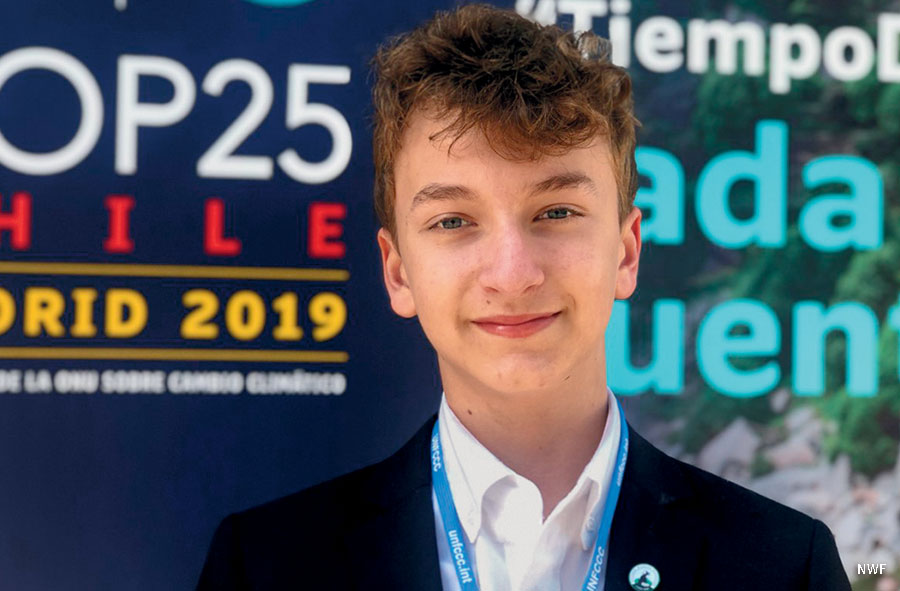 on the global stage

In 2019, Will Charouhis of Miami, Florida, (above, age 13), created his own climate movement called Forces of Nature after seeing the effects climate change could have on his hometown and feeling frustrated by inaction from local and national leaders. “I started this not by choice but by necessity,” he says. “Adults need to realize that climate change is an issue, and they have to do something.”

Charouhis’s work inspired NWF to bring him with their team of 10 to the COP25 climate conference in Madrid, Spain, last December. The NWF delegation hosted a workshop for governments to learn how to integrate nature-based solutions into their climate plans, and supported events such as the youth and indigenous people panel, where Charouhis spoke. “We like to include different voices at negotiations as a reminder of what’s at stake,” says Nathalie Walker, NWF director of tropical forests and agriculture. 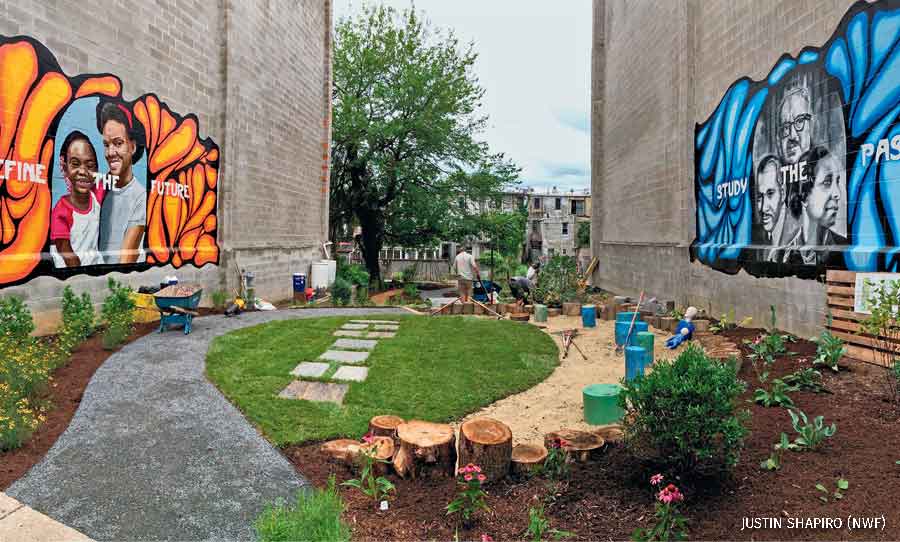 Community collaboration and vision came to life in August 2019 as NWF and the Druid Heights Community Development Corporation proudly unveiled a new public park in Baltimore, Maryland, built on what used to be a vacant lot. The NWF Mid-Atlantic team worked with local partners to turn the area into a nature-based playground filled with native pollinator plants, a rain garden and two murals by artist Dalvin Wade Byron (above).

At a regional scale, NWF is also working with the Pennsylvania Horticultural Society in Philadelphia to transform 50 vacant lots into parks and pollinator habitats. The sites were planted in October 2019, and each park has a different combination of plants, which the University of Maryland will study to determine which variety is most effective for climate-smart urban conservation. 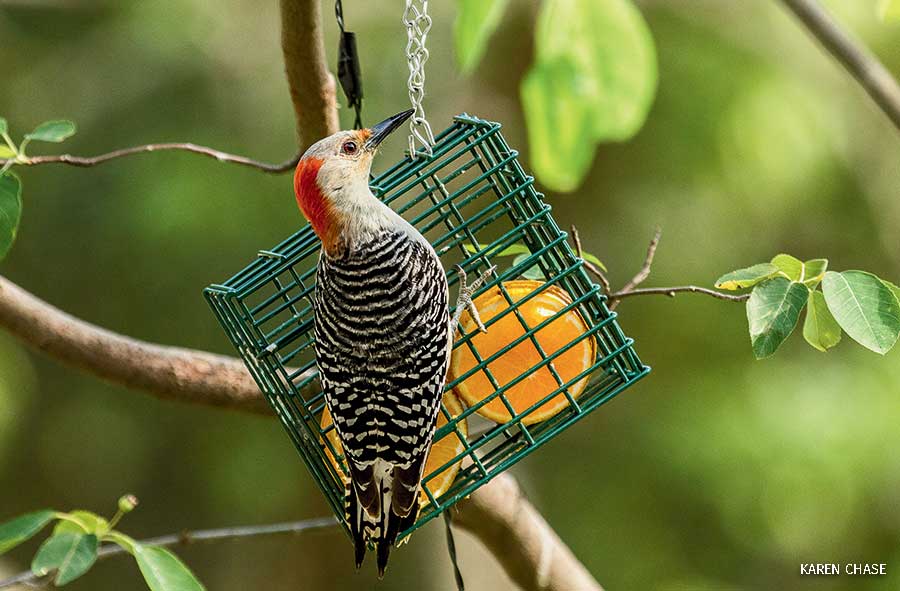