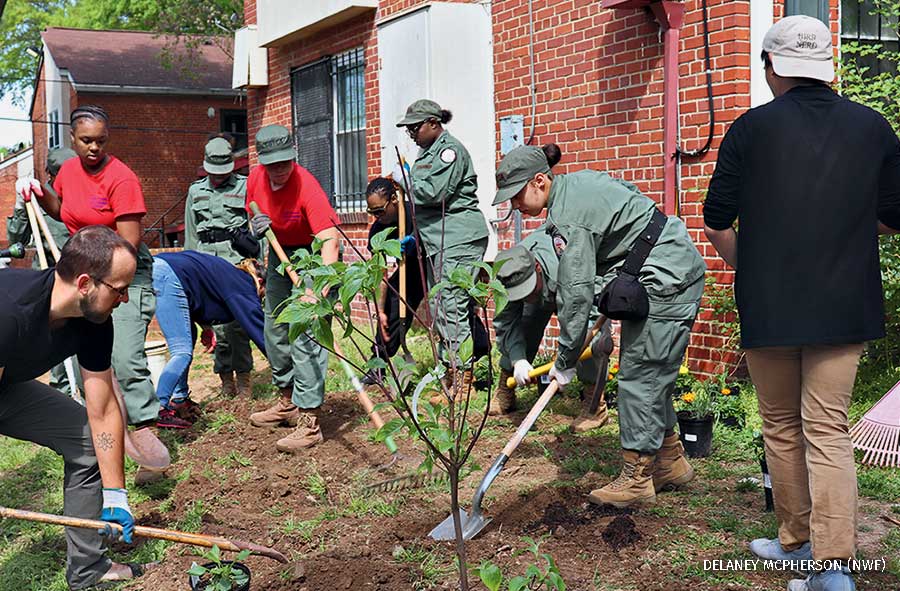 SINCE THE CORONAVIRUS PANDEMIC BEGAN earlier this year, more than 10 million young people in the United States have lost their jobs. Nearly one in three people age 16 to 29 are now unemployed, and in a recession, younger workers are typically first fired, last rehired—which is especially true for youth of color.

To address this crisis, the National Wildlife Federation is championing a bold plan modeled on a success of the past: We need a 21st century Civilian Conservation Corps (CCC) that will provide millions of youth meaningful work restoring our nation’s natural resources.

In 1933, President Franklin Delano Roosevelt created the CCC to put more than 3 million young unemployed men to work in forestry, soil conservation and recreation. By 1942, “Roosevelt’s Tree Army” had planted more than 3 billion trees, built more than 700 parks and wildlife refuges and completed thousands of miles of trails and roads. Despite its flaws—it excluded women, segregated work camps and caused some ecological damage—the CCC was the most ambitious restoration jobs program in history and helped forge the Greatest Generation, which won World War II.

Today, people are turning to nature for serenity and exercise as never before, yet we’re facing a staggering backlog of restoration needs along with increasing vulnerability to fires, floods and droughts. Eighty million acres of national forests need restoration and 12,000 species are in need of conservation action. Our national parks, refuges and other public lands have amassed $20 billion in deferred maintenance, and hundreds of thousands of abandoned mines and orphaned oil and gas wells need reclamation—all work that could employ millions.

These jobs will revitalize sectors and regions hit hard by COVID-19 and improve public health by reducing pollution. The projects will also store carbon, expand recreation opportunities, bolster community resilience to extreme weather and teach skills. But we have to do this right.

First, all communities must benefit, especially underserved urban, rural and tribal areas. Second, states, local governments and tribes must be full implementation partners. And third, jobs must provide educational and apprenticeship opportunities to ensure that participating youth are prepared for private-sector employment.

To prevent this crisis from hobbling the next generation, we must act now and put youth to work restoring our nation’s natural treasures.