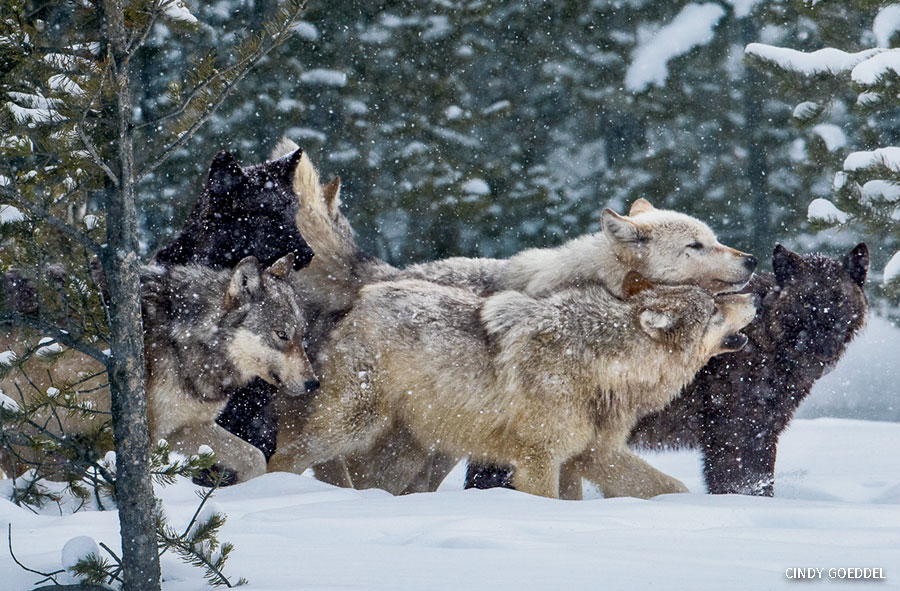 Based on research results from Yellowstone National Park, biologists have learned that elk rely on differences in the hunting behavior of their primary predators—wolves (above) and cougars—to stay safe during the cold months when prey are most vulnerable. To reach that conclusion, published in the journal Ecology Letters, the scientists analyzed long-term data collected throughout several winters by Yellowstone’s wolf and elk monitoring programs as well as separate research on the park’s radio-collared cougars. Examining the data, the researchers found that cougars hunt primarily in rugged, forested areas at night. Wolves, by contrast, “hunt mainly in grassy, flat areas during morning and at dusk,” says lead author Michel Kohl of Utah State University. The scientists explain that elk minimize the risk of predation by moving from one habitat to another at times when either cougars or wolves are resting. “Movement out of the grassy, flat areas and into the forested, rugged areas to avoid wolves did not result in greater risk from cougars and vice versa because these predators were active at different times of the day,” observes the group’s co-leader, Utah State University biologist Dan MacNulty. 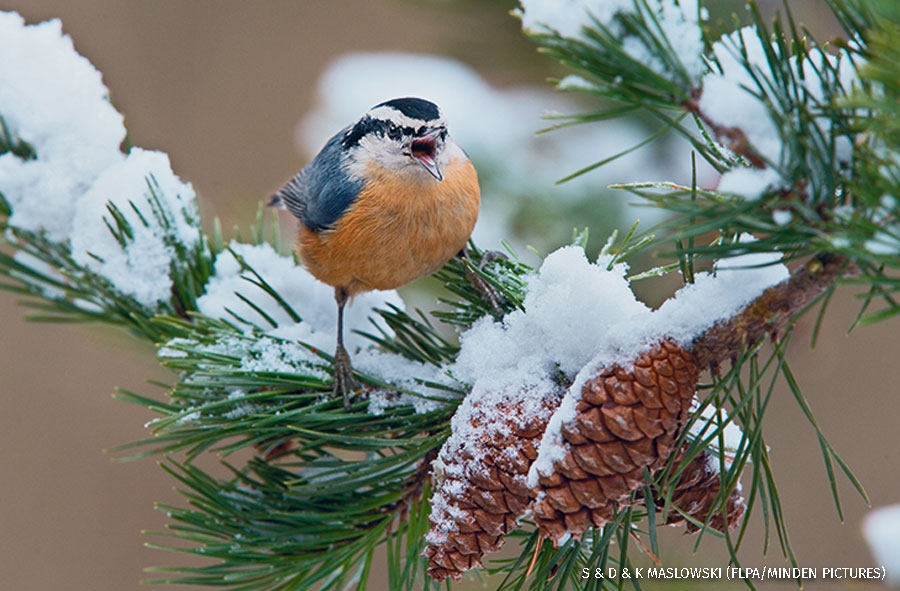 During especially harsh winters, songbirds that survive largely by eating conifer seeds often leave their normal habitats in Canada’s northern forests, heading south in search of food. A recent study in The Auk: Ornithological Advances reveals for the first time that these movements—called “irruptions”—can contract the birds’ numbers. Conducted by Environment Canada emeritus ornithologist Erica Dunn, the study is based on 50 years of data on red-breasted nuthatches (above) collected by Project Feederwatch, an effort of the Cornell Lab of Ornithology and Bird Studies Canada, and other citizen-science sources. Dunn focused on nuthatches, she says, because they return to the same core nesting areas across northern Canada each winter, making it possible to track breeding populations from year to year. She discovered that nuthatch population density declined—in some cases significantly—in summers that followed winters when the birds wandered widely. Her results suggest that irrupting birds succumb to the difficulties of avoiding predators and finding food in unfamiliar landscapes.

Most fearsome predator in the sea?

Analyzing several years of tagging and population data, marine researchers conclude in Scientific Reports that orcas (above), not great white sharks, are the more formidable of these two notorious ocean predators. Each year between September and December, white sharks—some nearly 20 feet long—gather in the Greater Farallones National Marine Sanctuary off the coast of central California to hunt for young elephant seals. But whenever orca pods pass through the area, even briefly, “white sharks will immediately vacate their preferred hunting ground and will not return for up to a year,” says Salvador Jorgensen, an ecologist at the Monterey Bay Aquarium and lead author of the study. Previous research in South Africa reveals that orcas attack sharks, in some cases using a specialized feeding method in which they eat only the livers of the fish. “We don’t think about how fear and risk aversion might play a role in shaping where large predators hunt and how that influences ocean ecosystems,” Jorgensen says. “It turns out these risk effects are very strong, even for large predators like white sharks.”