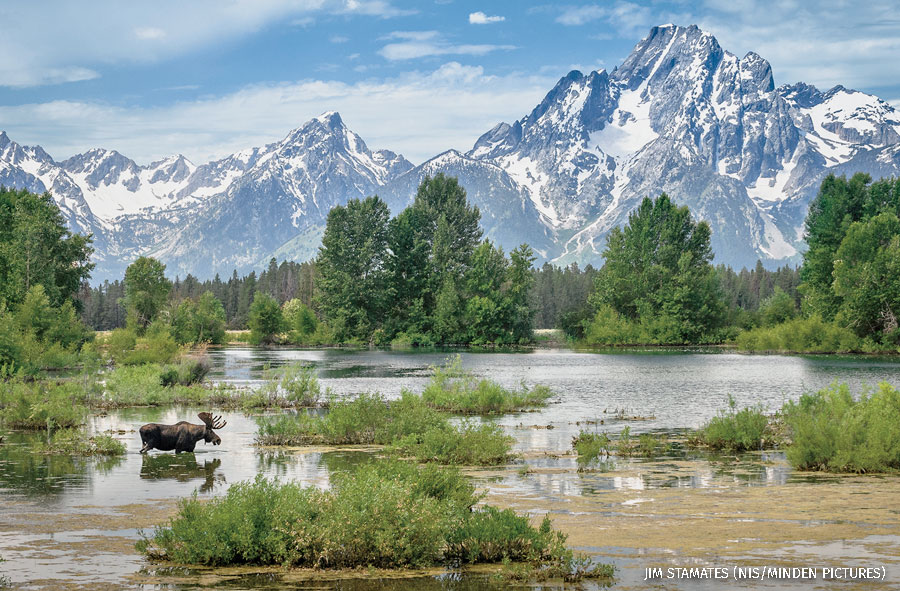 Protecting habitat from summits to sage

“If you drive 200 miles through Wyoming, you might pass through three towns,” says Dwayne Meadows, executive director of the Wyoming Wildlife Federation (WWF). Practicing effective conservation across this vast state—the least populated in the nation with fewer than 600,000 people—is a huge challenge. But last year, WWF found an innovative way to tackle it by creating a program called Conservation Ambassadors.

These 12 volunteers include hunters, anglers, biologists and business owners who crisscross the state to educate and engage local communities in issues vital to WWF’s core mission: to conserve wildlife, habitat and sporting opportunities from the summits of the Tetons (above) to the vast sagebrush steppe. 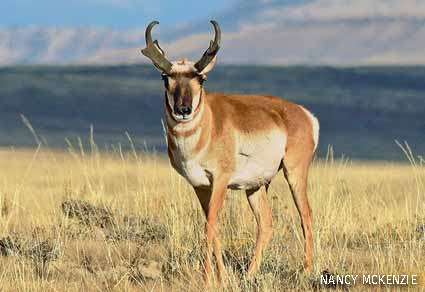 Ambassador Sam Stein, for example, raised funds for sage-grouse conservation by organizing “Films of the Feathered,” a film festival and wild-game cook-off that drew folks all the way from Montana, Idaho and Utah. “It really took off,” says Stein.

Protecting migration corridors for pronghorn (pictured) and mule deer is also a key priority for WWF, which supports wildlife crossings to reduce road mortality and works with landowners to create specialized fencing that allows safe passage. And this year, by rallying support across the state, WWF succeeded in its effort to convince the Bureau of Land Management to defer some oil and gas leases that would have impacted a key mule deer migration route. “We have to find a balance between working with oil and gas—the economic engine of the state—and conserving wildlife,” says Meadows.

Conservation requires such collaboration in Wyoming, a state where roughly half its 62 million acres is public land. Whether public or private, WWF fights for it all and is celebrating what Meadows calls a “record year” of successes for wildlife. 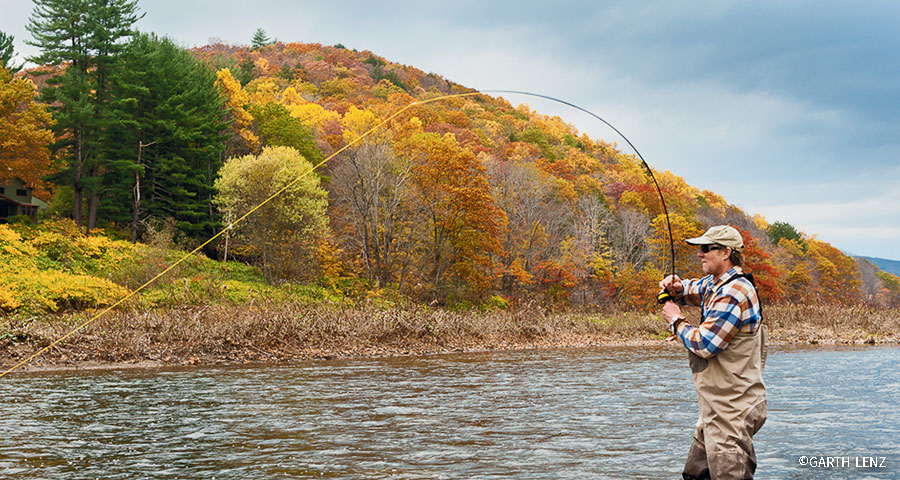 Last May, with a flourish of pens, the Delaware River Basin gained new hope for a healthier future. At a signing ceremony in Philadelphia, NWF President and CEO Collin O’Mara joined governors Tom Wolf of Pennsylvania, John Carney of Delaware and Phil Murphy of New Jersey (below left to right) as they signed a pledge to protect the 330-mile river. 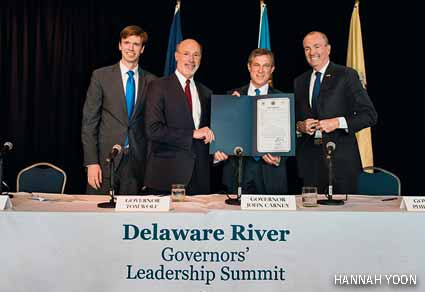 More than 13 million people in the Delaware River’s four basin states depend on the river for clean drinking water. Natural beauty and resources in the basin help generate more than $22 billion in economic activity. And the river and its tributaries, bays and wetlands sustain huge populations of migratory birds, horseshoe crabs, world-class streams for fishing (above) and vital habitat for frogs, river otters, turtles, butterflies, bald eagles, mussels and a host of other creatures.

Yet weakening of federal clean water rules and contaminants from the growing region’s cities, ports and industries threaten the basin’s waters. So, in 2018, NWF and affiliates Penn-Future, New Jersey Audubon, Delaware Nature Society and Environmental Advocates of New York—plus New York’s Friends of the Upper Delaware River—launched the “4theDelaware” campaign, running public ads to raise awareness and urging area governors to act. “This is the first time our top elected officials have come together to acknowledge the river’s significance as a source of drinking water, economic development and community well-being,” says PennFuture President and CEO Jacquelyn Bonomo. The effort may become a national model for watershed restoration—and a legacy for future generations. 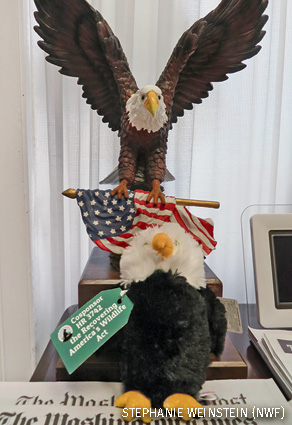 The eagle has landed

On June 16, Capitol Hill was aflutter with stuffed bald eagles (pictured), which NWF volunteers delivered to all 435 members of the House of Representatives to urge their support for the Recovering America’s Wildlife Act. Tags on each eagle listed the number of NWF members from the representative’s district. If passed, the legislation would provide $1.4 billion annually for state and tribal wildlife conservation, including measures that could curb the need for listing species as threatened or endangered. “Bald eagle recovery is a great wildlife success story,” says Naomi Edelson, NWF’s senior director of wildlife partnerships. Once nearly wiped out, the species recovered thanks to legislation banning DDT and agency efforts to reintroduce eagles into the wild. “The eagle represents what we can accomplish with wise policy and adequate resources,” says Edelson. Awaiting a vote, the bill already has 130 co-sponsors from both sides of the aisle.

Campaign to move a hog farm protects a national treasure

People protesting poop can produce results. The C and H Hog Farm learned that lesson after protesters (below)—and a public campaign by a coalition including the Arkansas Wildlife Federation (AWF), Buffalo River Watershed Alliance, NWF and others—convinced the Arkansas Department of Environmental Quality (ADEQ) to cancel the farm’s permit to operate just six miles away from the Buffalo National River (above), a treasured natural resource. 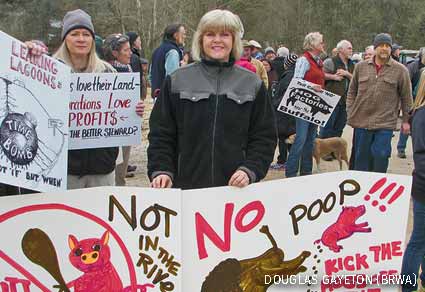 Opened in 2013, the farm fed 6,500 pigs, their waste held in artificial ponds. People feared that contaminants could seep through the region’s porous limestone and into the river, where it could cause toxic algal blooms, kill fish and taint the waters and shores that draw millions of visitors and dollars. “Allowing an operation like C and H to exist so close to something so precious is asking for a disaster,” says AWF President Trey Buckner. Action campaigns by NWF and AWF generated thousands of comments that helped convince the ADEQ to revoke the farm’s permit in November 2018, and this past July the farm finally shut down. ADEQ is now trying to prevent any similar operations within the Buffalo River Watershed, a move that could help keep the nation's first national river fecal-free. 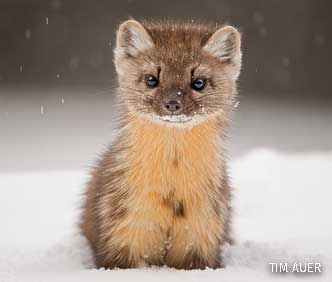 National Wildlife magazine’s annual photo contest draws more than 22,000 images every year from across the globe. Now, for the first time—in partnership with the American Association for the Advancement of Science—we will exhibit some of these images in the expansive halls of the AAAS headquarters in Washington, D.C. From November 2019 through February 2020, the exhibit will showcase 50 photographs that celebrate wildlife and explore some of the challenges species face today—as well as how we can help them thrive. The exhibit is free and open to the public, so if you’re in the area, please come feast your eyes.