The endangered Gulf of Mexico population may be just one more catastrophe away from extinction. 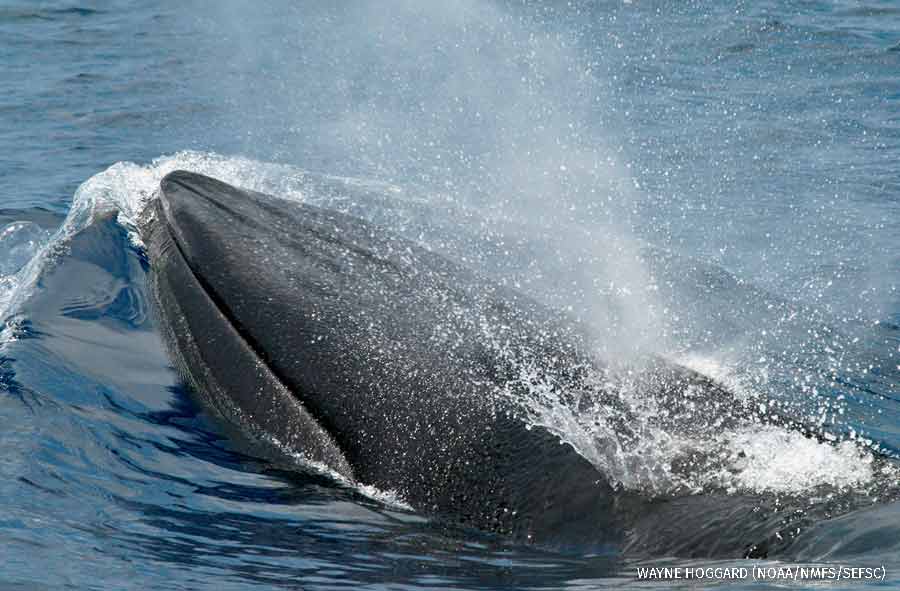 In a rare sighting, a Bryde’s whale pops up for a breath of air. This distinctive Gulf population is now critically endangered.

ELUSIVE AS THEY ARE RARE, Bryde’s whales living in the Gulf of Mexico may be just one more catastrophe away from extinction. In April 2019, the National Marine Fisheries Service (NMFS) declared the Gulf population endangered. Fewer than 50 mature animals remain, surviving only in a narrow slice of the northeastern Gulf called De Soto Canyon.

The only baleen whales living year-round in the Gulf, Bryde’s whales were hit harder by the 2010 oil spill than any other open-water marine mammal in the region. Oil fouled nearly half the whales’ remaining habitat and killed an estimated 17 percent of them outright. In the aftermath, more than a fifth of adult females suffered reproductive failures, meaning further losses to an already dangerously small population.

Even before the disaster, scientists were studying these scarce creatures, trying to understand their relationship to other Bryde’s whales around the world. “If they were unique and not just a local part of a much more-broadly distributed population,” says NMFS researcher Patricia Rosel, “then conservation and management needs would be much greater."

Nearly 20 years of effort to collect DNA samples from as many individuals as possible—followed by painstaking genetic analyses—revealed that, indeed, the De Soto Canyon residents are a distinctive evolutionary lineage, different from all other Bryde’s whales and, therefore, in desperate need of protection.

Records show that the whales once lived across much of the northern Gulf. But destructive oil spills, fatal collisions with burgeoning ship traffic, entanglement in fishing gear and overwhelming levels of human-generated noise have “made their habitat less and less viable,” says Michael Jasny, director of marine mammal protection for the Natural Resources Defense Council, which petitioned NMFS to list the Gulf population as endangered. “To bring the whales back, we need to take a hard look at the oil and gas activity that has turned the northern Gulf into an industrial zone.”

Lynne Warren wrote about plant poaching in our December-January 2020 issue.

Is It Too Late For A Mysterious, Newly Discovered Whale? »
A Photographer's Close Encounter »
Our Work: Restoring the Gulf of Mexico »