It’s easy to feel overwhelmed by the countless stories of wildlife species declining or balancing precariously at the brink of extinction. Amidst these disheartening stories, it’s important to remember that we have the power to reverse wildlife declines and bring species back from near extinction.

Through collaborative partnerships, bold efforts, and decisive investments, conservationists have recovered wildlife species that have suffered dramatic declines and even brought back species that had gone extinct in the wild.

Let these 12 conservation success stories serve as hopeful reminders that when we invest in wildlife conservation, wildlife wins. 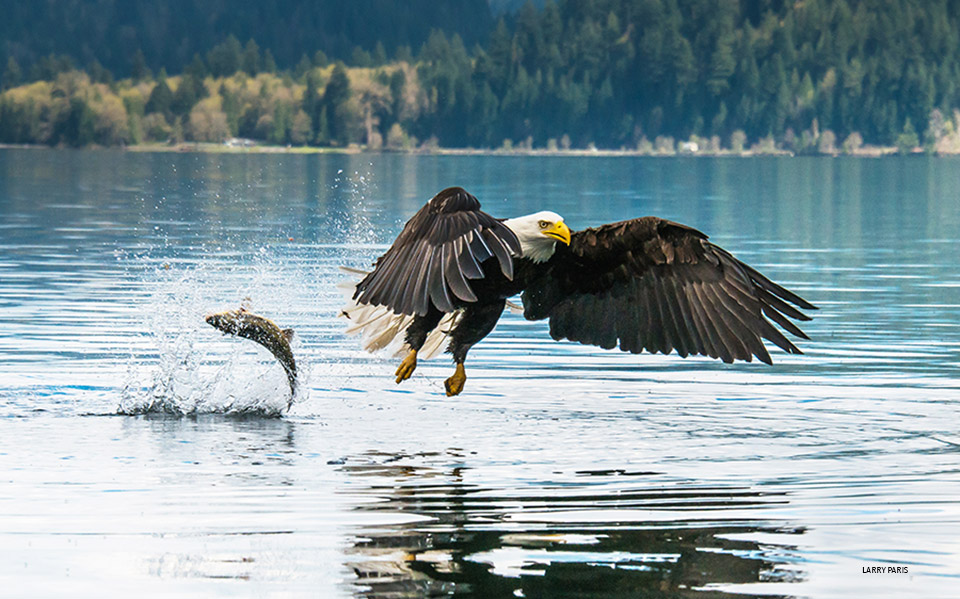 Long a symbol of our nation’s pride, the bald eagle came to the brink of extinction throughout much of its range in the 1960s. Following a long-term decline coinciding with a reduction in its prey species, introduction of the egg-thinning pesticide DDT nearly wiped out bald eagles from the lower 48 states.

In 1962, Rachel Carson’s landmark conservation science book Silent Spring brought to light the detrimental effects of DDT on birds and the environment, and under mounting pressure, the EPA largely banned the use of DDT in 1972. The bald eagle landed on the original endangered species list in 1967, gaining important protections from hunting and loss of habitat.

The ban on DDT, protections from the Endangered Species Act, and captive breeding and reintroduction efforts all helped reverse the bald eagle’s decline. In 2007, the Interior Department officially declared the bald eagle fully recovered and removed it from the endangered species list. 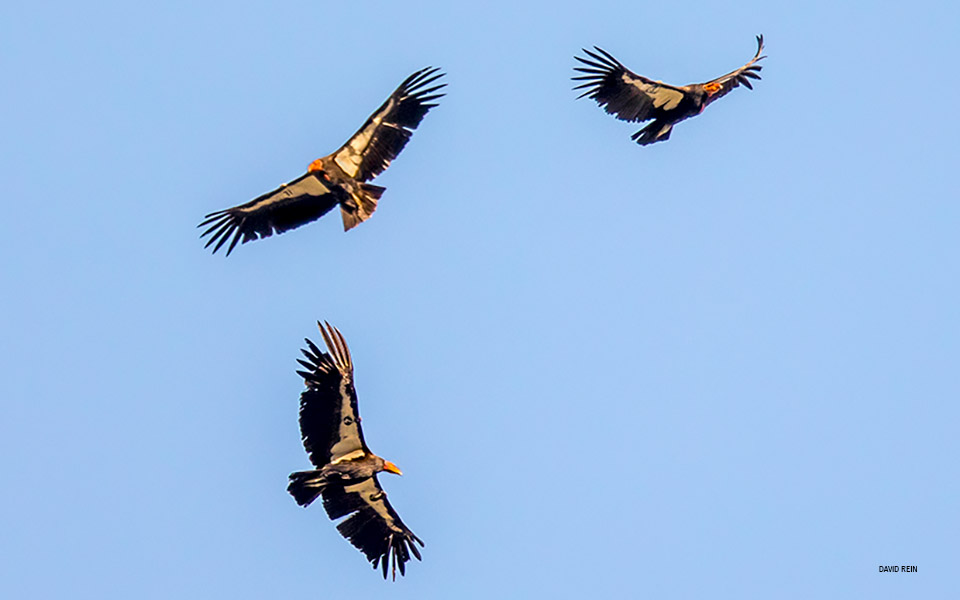 In 1987, the U.S. Fish and Wildlife Service made the bold, but risky decision to capture all remaining California condors in the wild, which by that time numbered only 27. With every existing California condor now in captivity, efforts focused on breeding the birds at the San Diego Wild Animal Park and the Los Angeles Zoo.

Breeding efforts were successful, and in 1991, the condor recovery program began to release the birds back into the wild. Since then, the wild population has grown, and as of 2018 there were an estimated 488 California condors living in the wild or captivity, and in 2019 the 1,000th chick hatched since the launch of the recovery program. 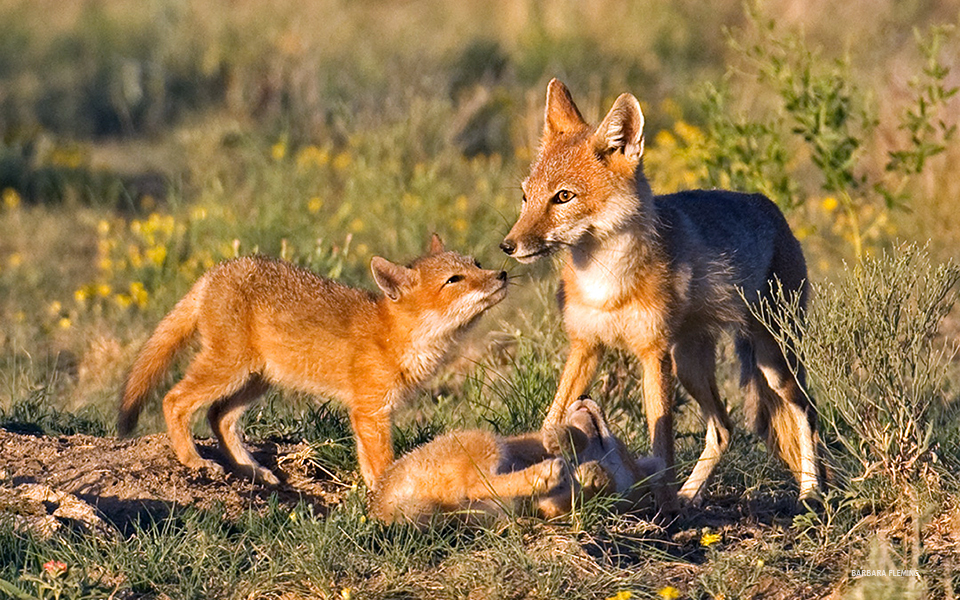 Considered among the least wary of North America’s wild canids, the swift fox was highly susceptible to historic predator control measures and was nearly wiped out by the mid-20th century. In 1994, the US Fish and Wildlife Service determined the swift fox warranted protections under the Endangered Species Act, but listed it as a “candidate” species because there were other higher priority species on the endangered species list. This prompted states within the swift fox’s historic range to come together and form the Swift Fox Conservation Team.

The team worked collaboratively to protect grassland habitat, launch successful reintroduction campaigns, and gain a deeper understanding of swift fox ecology and best management practices through research. Conservation efforts like these across the Great Plains have stabilized swift fox numbers, preventing the need for an Endangered Species Act listing. However, more conservation is needed to address continuing threats to the species like loss of grassland habitat.

There is only a single population in the world of the tiny fish known as the Foskett speckled dace, and it was historically confined to just one spring in Oregon. Livestock use of its habitat, modification of its home spring, and groundwater pumping resulting in a lower water table all threatened the dace, which was already at higher risk of extinction due to its extremely limited range. These factors sent the Foskett speckled dace to the endangered species list in 1985.

To help ensure the survival of the species by creating a refuge population, wildlife officials translocated a number of Foskett speckled dace to an additional spring close to the fish’s native spring. In 1987, the Bureau of Land Management (BLM) acquired the land around both of these springs and constructed fences around them to keep out cattle that were damaging the habitat.

In recent years, the Bureau of Land Management has excavated accumulated sediment from the springs and removed encroaching vegetation, creating even more open-water habitat for the dace. With its habitat expanded and restored and a plan in place to continue to protect it, the Foskett speckled dace is no longer threatened with extinction, and the U.S. Fish and Wildlife Service removed it from the endangered species list in September of 2019. 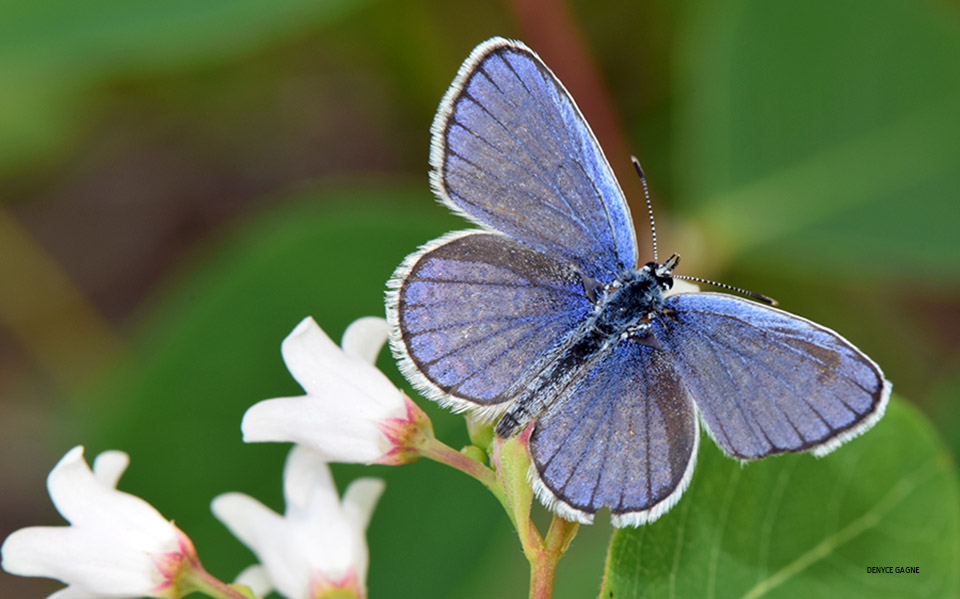 The Karner blue butterfly once flourished in the oak savannas and pine barrens of a continuous geographic band stretching from Minnesota east to the Atlantic seaboard. Unfortunately, populations declined dramatically in the 20th century because of habitat loss and fire suppression, which has limited the growth of wild blue lupine—a fire-dependent plant that serves as the only host for Karner blue caterpillars.

With its range having diminished to only limited portions of New Hampshire, New York, Michigan, Wisconsin, Ohio, Indiana, and Minnesota, the Karner blue butterfly was listed as Endangered in 1992. Since then, bold conservation efforts including reintroductions in New Hampshire, Ohio, and Indiana, prescribed burning to restore wild blue lupine, and conservation agreements with private landowners, have helped recover the butterfly. 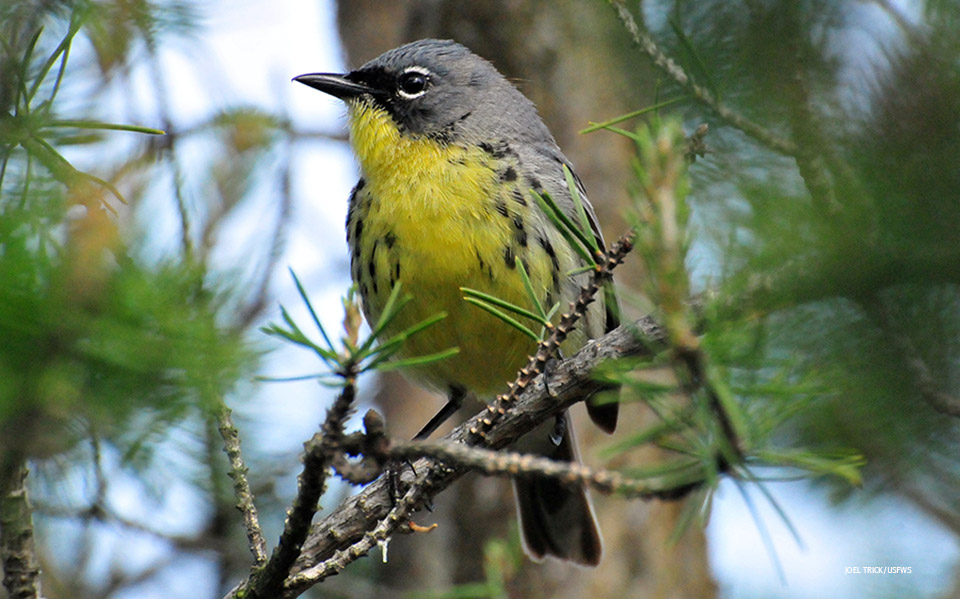 Due to its dependence on a highly specific habitat type—large stands of young, dense jack pine forest disturbed by wildfire—the Kirtland’s warbler has one of the most restricted breeding ranges of any bird in the continental United States. Historic fire suppression has limited the growth of new jack pine forest, leading to a dearth of habitat for the warbler.

Another threat has come from the parasitic brown-headed cowbird, which lays its eggs in the nests of other birds and has made it difficult for Kirtland’s warblers to raise their young successfully. These threats caused a huge decline in Kirtland’s warblers and led the U.S. Fish and Wildlife Service to list the species as endangered in 1967.

Conservationists launched an aggressive cowbird removal effort in 1972 that continues to this day and has led to major improvements in nesting success—enough chicks are surviving to increase the population. With a better understanding of the warbler’s habitat needs, land managers are successfully maintaining suitable habitat by clearing forest and planting young jack pine seedlings every year. 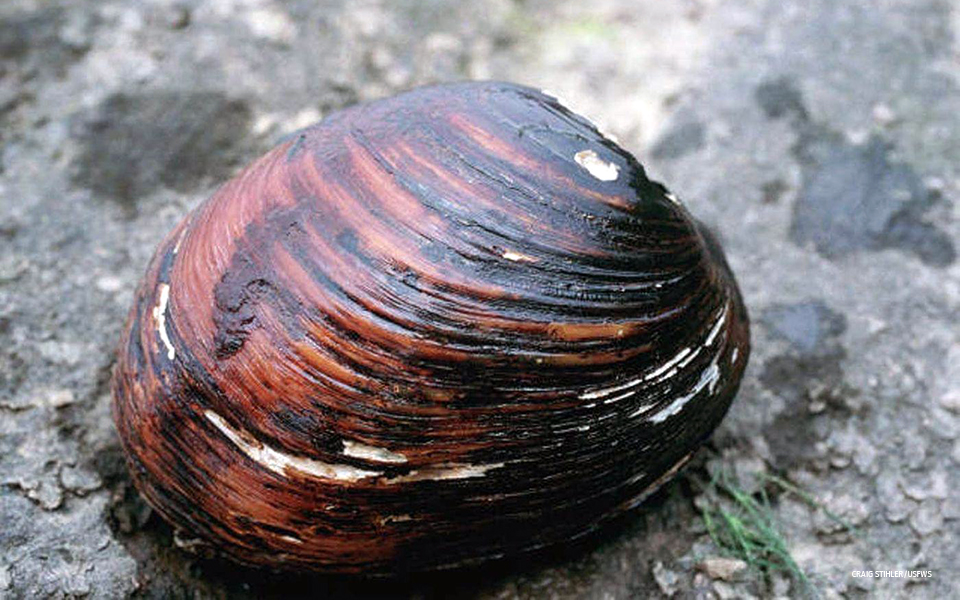 The Licking River in Kentucky historically supported 63 species of freshwater mussels. However, due to stream degradation from dams and agricultural runoff, eight of these mussel species had disappeared from the river.

Recent conservation efforts including captive breeding and reintroduction have returned six extirpated species to the river, restoring it to 96% of its historic mussel diversity and making it one of the most diverse mussel rivers in Kentucky and North America. 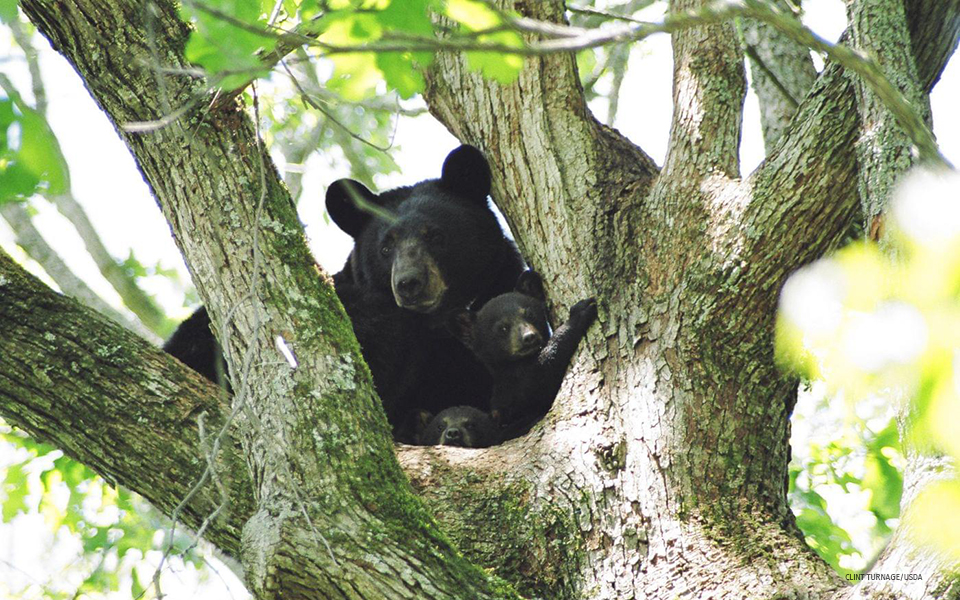 The Louisiana black bear is a subspecies of black bear known to occur only in Louisiana, east Texas, and western Mississippi. By 1980, over 80 percent of the Louisiana black bear’s habitat had been lost or modified, and in 1992, the bear was listed as threatened. Since the listing, voluntary, incentive-based private land restoration programs have been crucial to the bear’s recovery. One such program, the Wetlands Reserve Program, has led to the permanent protection or restoration of more than 148,000 acres of habitat since 1992.

Due to the success of these programs and other partnerships between private landowners, state and federal agencies, universities, and non-governmental organizations, the Louisiana black bear has rebounded and was delisted from the Endangered Species Act in 2016. 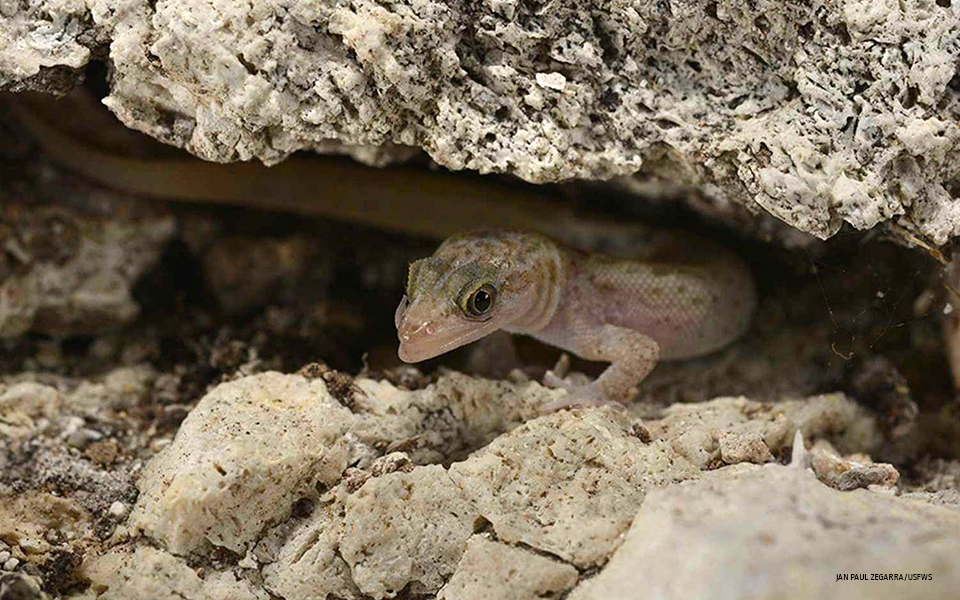 The monito gecko is a tiny lizard with a big success story. Found only on the tiny island of Monito off the coast of Puerto Rico, this inch-and-a-half long gecko had been devastated by black rats that had invaded the island.

In 1982 the gecko was listed as endangered. It was clear what needed to be done to save the gecko, and the island’s small size made things simpler. In 1992, the Puerto Rico Department of Natural and Environmental Resources (PRDNER) launched a black rat eradication campaign on Monito Island and then mounted an additional eradication campaign in 1999.

The program was a success—in 2014, officials declared the island rat free, and the Monito gecko was making a comeback. By targeting and eliminating the gecko’s main threat, conservationists have ensured the gecko is no longer at risk of extinction, and in October of 2019, the U.S. Fish and Wildlife Service removed the Monito gecko from the endangered species list.

Scientists from the US Fish and Wildlife Service and PRDNER estimate there are now over 7,600 geckos on Monito Island. 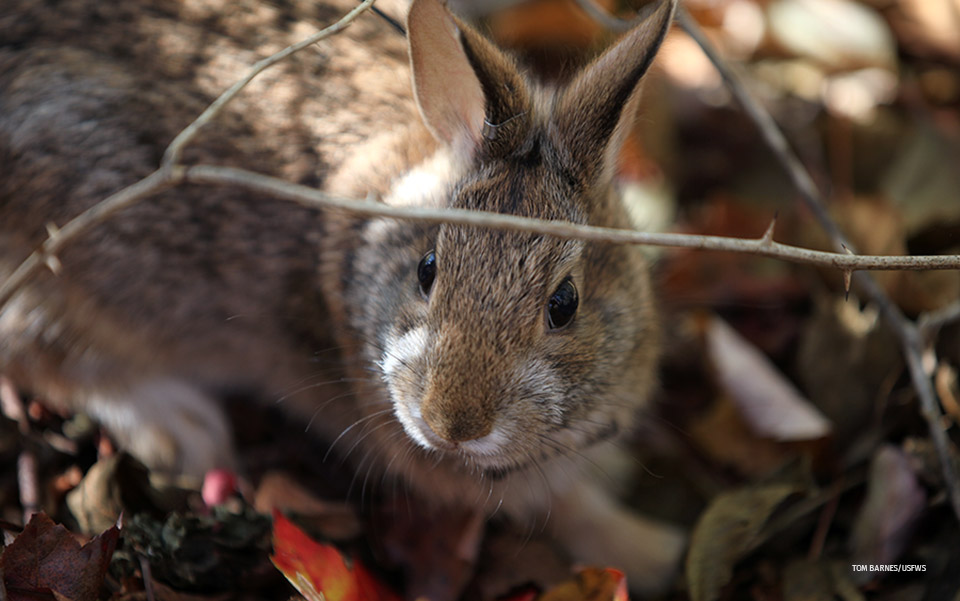 However, as young forests with thick undergrowth that the rabbit depends on became fragmented or matured into closed-canopy forests with sparse understories, the New England cottontail’s range shrunk dramatically. By 2006, it was estimated that the rabbit only occupied 14% of its historic range, and the New England cottontail became a candidate for protection under the Endangered Species Act.

Thanks in part to funding from State Wildlife Grants, states were able to take proactive steps to recover the cottontail by restoring the second-growth forest habitat that it needs. In September of 2015, the U.S. Fish and Wildlife Service determined that as a result of public and private habitat protection and restoration along with a captive breeding program, the New England cottontail was not in danger of extinction and was removed from consideration for endangered species protections. 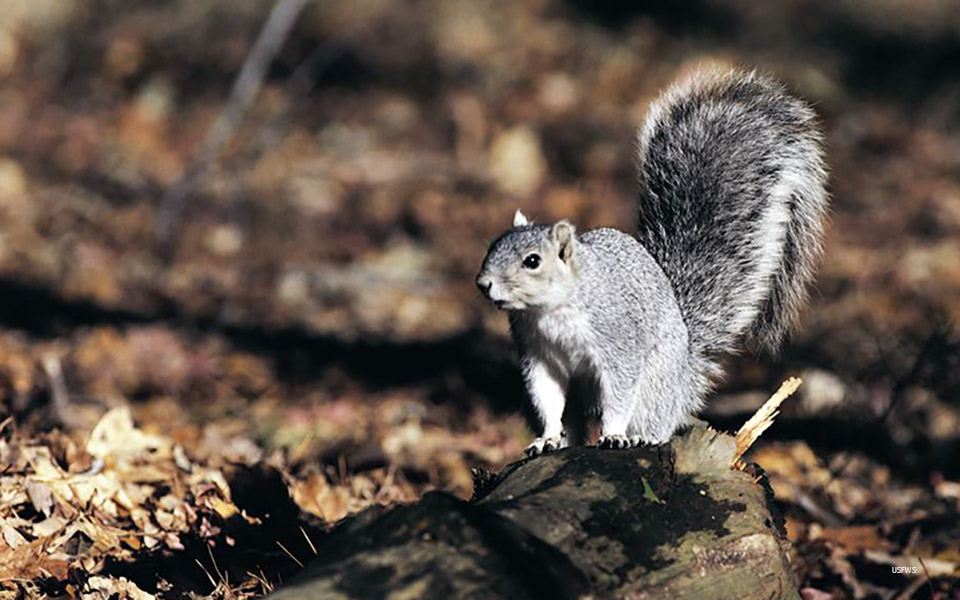 Unlike the more familiar eastern gray squirrel, the Delmarva fox squirrel is not fond of acrobatics—rather than leaping from tree to tree it prefers to descend down its tree and scamper across the ground to the next one. Extensive development and logging in the Delmarva peninsula of Delaware, Maryland, and Virginia destroyed and damaged the squirrel’s habitat, landing it on the original endangered species list in 1967.

Thanks to decisive conservation efforts like reintroductions and habitat restoration, the Delmarva fox squirrel has rebounded. It now numbers nearly 20,000 individuals and was removed from the endangered species list in 2015 due to its successful recovery. 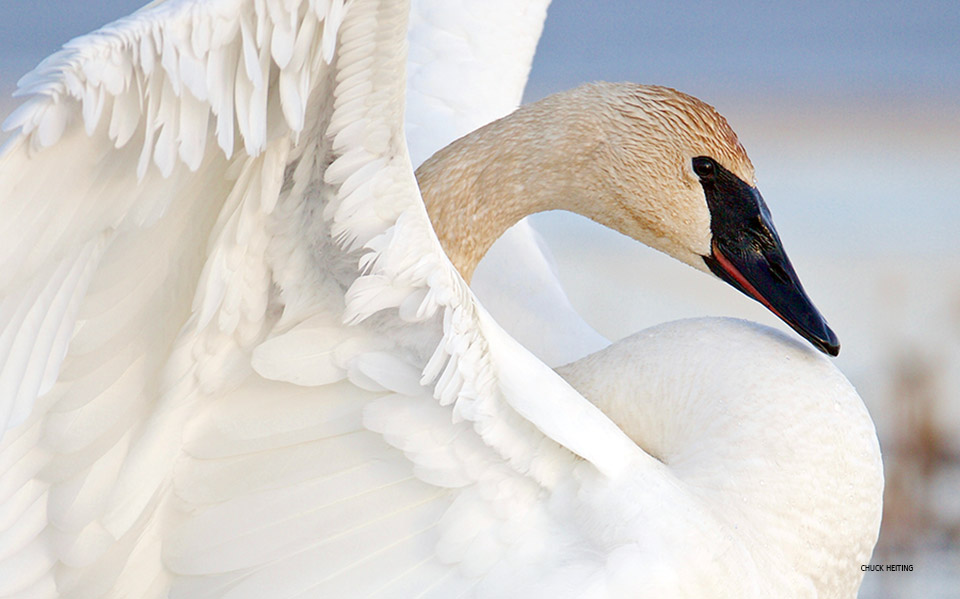 With males weighing in at over 26 pounds on average, North America’s largest native waterfowl species requires an open-water “runway” of at least 100 yards to build up enough speed to get airborne. Once found across most of North America, the trumpeter swan declined rapidly as civilization expanded westward and markets demanded long feathers to adorn fashionable hats and writing quills.

The species is also particularly sensitive to lead poisoning from consuming lead shot. By the 1930s, fewer than 100 trumpeter swans survived south of Canada. Aggressive conservation efforts, including protection from hunting and disturbance, have helped recover the species in parts of the Northwest.

These stories prove that when we work together and invest in wildlife conservation, we can reverse species declines and even bring species back from the very brink of extinction. However, with over 12,000 species identified as being in need of conservation, our current conservation funding system falls far short of providing enough to recover all the species in need.

Let’s make every vulnerable species be a conservation success story.

Scientists estimate that one third of all U.S. wildlife species are already imperiled or are vulnerable. Habitat loss, invasive species, and severe weather have all taken a severe toll on birds, mammals, fish, amphibians, reptiles, butterflies, and bees. All types of wildlife are declining—in many cases dramatically. We need urgent action to protect vulnerable wildlife. The Recovering America’s Wildlife Act is the solution we need.