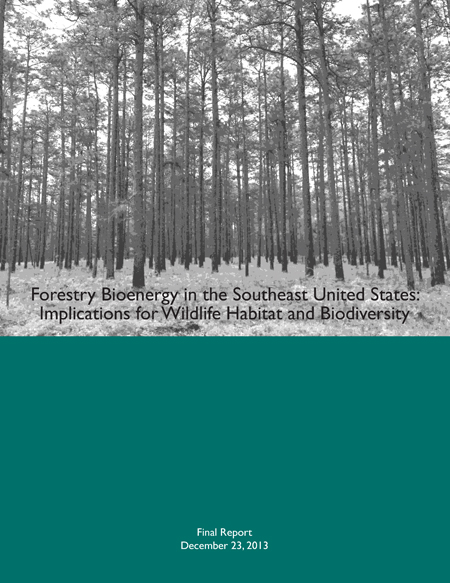 Spanning across the low-lying and sandy soils of the Coastal Plain, the gentle slopes and clay soils of the Piedmont, and the steep sloping terrains of the southern Appalachian Mountains, the forests of the southeastern (SE) U.S. are widely recognized for their high biodiversity. Differentiated across the region by various terrains, precipitation patterns, annual temperature ranges, and dominant tree species, SE forests broadly share a wet and humid climate with mild winters that produce minimal to no persistent snow cover in even the coldest locations. These favorable climate conditions support high primary forest productivity as compared to most other U.S. forest regions and similar temperate latitudes across the world. This high productivity and terrain heterogeneity together support the wide diversity of ecological associations and wildlife habitats found throughout the SE region.

Land cover change and management factors have prompted signifi cant population and range area declines for a number of native forest-dependent plants and animals throughout the SE over the past two centuries. Specifi c factors that have served as primary stressors to native forest biodiversity in the SE region include: 1) historic logging of virtually all original primary forests; 2) large-scale clearing of primary and naturally regenerated forests for conversion into agriculture, plantation pine forestry, and suburban development; 3) long-term suppression of fi re from forest ecosystems dependent on this disturbance; and 4) establishment and spread of various invasive plants, animals, and pathogens (see, e.g., Martin 1993; Griffi th et al. 2003). But despite these direct habitat stressors and additional secondary effects from large-scale habitat fragmentation, today’s SE forest landscape still contains large areas of high quality habitat that together support the vast majority of native plant and wildlife species originally found in the region at the time of European discovery (Trani 2002).

This study was commissioned jointly by the National Wildlife Federation and Southern Environmental Law Center for the purpose of developing and discussing scenario-based assessments of wildlife habitat risks from the woody biomass to bioenergy industry in the SE U.S. The rationale behind the study that the SE U.S. forest region – which the U.S. Forest Service defi nes as including the forested areas of Alabama, Arkansas, Florida, Georgia, Kentucky, Louisiana, Mississippi, North Carolina, Oklahoma South Carolina, Tennessee, Texas, and Virginia – is currently experiencing what is perhaps the world’s most rapid growth in the development of woody biomass production facilities (Mendell and Lang 2012). According to recent estimates by Forisk Consulting (2013), U.S. wood pellet production may exceed 13.7 million tons in 2014, representing an 87% increase from 2012 and with most of this production likely being supplied by forests of the SE U.S. Due mostly to ongoing renewable energy mandates in the EU being implemented under the Kyoto Accord, some analysts expect similar demand increases for SE wood pellets to continue through 2020 and beyond (Goh et al. 2013).

Implications for wildlife habitat and biodiversity.