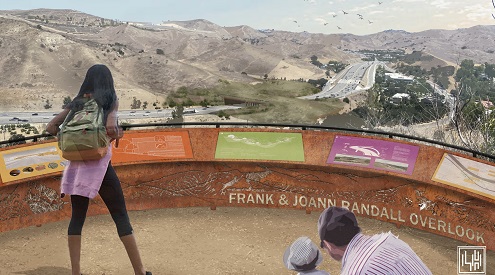 $5 Million Gift to the #SaveLACougars Campaign by Philanthropists, Joann and Frank Randall to the Wallis Annenberg Wildlife Crossing

This latest donation adds to the Randall’s unwavering and long-standing commitment to environmental stewardship and conservation in Southern California.

This generous contribution, which advances the campaign toward its target goal, will help ensure that critical components of the project are funded such as wildlife crossing design and engineering expertise, National Park Service ongoing landmark wildlife research, and most notably, a future educational overlook that will be located at a viewpoint on a trail near the crossing. In recognition of their gift, this overlook, which will have interpretive panels about the project and area wildlife, will bear their name.

“We applaud the Joann and Frank’s leadership with this generous gift and contribution to the Wallis Annenberg Wildlife Crossing,” said Collin O’Mara, president and CEO of the National Wildlife Federation. “This visionary and monumental public-private partnership broke ground thanks to people like Joann and Frank. We also hope this will inspire other philanthropic leaders to join them in getting our campaign to our goal to make the wildlife crossing whole.”

Based in Newport Beach, Joann and Frank Randall have long demonstrated an unwavering commitment to the protection of wildlife and preserving the open spaces and ecosystems in which they live. In 2019, their vision saved 401 acres at Banning Ranch from development – ensuring that Southern California’s largest remaining undeveloped swath of coastal land remain a nature reserve into the future.

The Randall’s have been generous and steadfast supporters of the National Wildlife Federation’s #SaveLACougars campaign and its efforts to save the endangered mountain lion population and build the world’s largest wildlife crossing.

“Joann and Frank truly care about wildlife and wild places, and have left a significant legacy not just for this wildlife crossing but for conservation,” said Beth Pratt, California regional executive director for the National Wildlife Federation and leader of the #SaveLACougars campaign. “They are truly conservation heroes. I am honored to also call them friends and can attest to their dedication and commitment to protecting the natural world.”

Now under construction, the Wallis Annenberg Wildlife Crossing will span over ten lanes of the 101 freeway in the Los Angeles area. Slated for completion in 2025, the monumental structure will be a global model for urban wildlife conservation and benefit the wildlife and ecology of the area for generations to come.

The crossing responds to two decades of study by the National Park Service in the Los Angeles area that has shown roads and development are deadly for animals trying to cross and have created islands of habitat that have genetically isolated wildlife—from bobcats to birds and lizards. The visionary wildlife crossing will preserve biodiversity across the region by re-connecting an integral wildlife corridor, and most critically, it will help save a threatened local population of mountain lions from extinction.

The Wallis Annenberg Wildlife Crossing is a public-private partnership of monumental scope that has leveraged the expertise and leadership of dozens of organizations and institutions. The core partners include Caltrans, the National Park Service, the Santa Monica Mountains Conservancy/Mountains Recreation and Conservation Authority, Resource Conservation District of the Santa Monica Mountains, and the National Wildlife Federation. Project partners are working alongside the world-renowned design team led by a landscape architectural practice, Living Habitats LLC, who has been collaborating closely with Caltrans and coordinating with a broad team of wildlife crossing experts in the planning and design development of the crossing.

To learn more about the #SaveLACougars campaign and follow progress on the Wallis Annenberg Wildlife Crossing visit https://savelacougars.org/. For more on the partners and stakeholders behind the project, to access a comprehensive set of FAQs or to join the campaign that is building the world’s largest wildlife crossing visit https://101wildlifecrossing.org/.