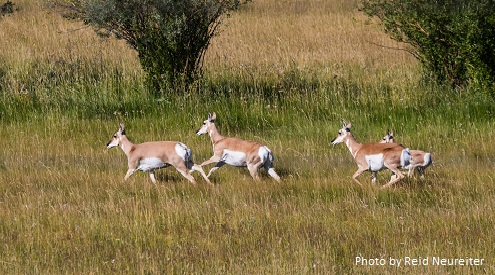 DENVER – The Bureau of Land Management’s new policy to conserve and restore wildlife movement and migration pathways by working collaboratively with states, Tribes and private landowners will benefit fish and wildlife and is a great step forward in tackling the nation’s biodiversity crisis. The new Instructional Memorandum provides valuable guidance that directs the agency’s state offices to consider fish and wildlife movements in land use planning.

“Wildlife must migrate and move in order to survive, so this new guidance to conserve and restore  wildlife pathways will benefit elk, mule deer, pronghorn and many species of fish,” said David Willms, senior director for Western wildlife and conservation at the National Wildlife Federation. “It is especially heartening to see the emphasis on collaboration with state and Tribal leaders and private landowners to connect and restore wildlife habitat and remove invasive species, which will have tremendous benefits for wildlife and humans alike.”

“With wildlife under pressure from climate change and development, it is more important than ever to ensure that wildlife have intact, safe passageways to migrate. This new guidance from the Bureau of Land Management can ensure that the Upper Rio Grande watershed will remain one of the most intact habitats in the country,” said Jesse Deubel, executive director of the New Mexico Wildlife Federation. “We applaud the Biden Administration for prioritizing collaboration with state and Tribal agencies and private landowners as we all work to safeguard wildlife populations for generations to come.”

“The best science available shows the West, including Nevada, is losing 1.3 million acres of sagebrush habitat every year. The continuing fragmentation and disconnection of habitat is resulting in increasingly isolated animal populations that has led to the inability for wildlife to reach important winter and summer habitat.” said Russell Kuhlman, executive director of the Nevada Wildlife Federation. “We applaud the BLM for committing to work with the Nevada Department of Wildlife in our state to ensure that wildlife connectivity is an integral part of their wildlife management process.”

"Hunters and anglers across Montana witness firsthand the negative impacts of habitat fragmentation on elk, bear and scores of wildlife species. We applaud the Bureau of Land Management's science-based guidance and deep commitment to work with state and Tribal fish and wildlife agencies and other partners to ensure that connectivity is an integral part of wildlife management," said Frank Szollosi, executive director of the Montana Wildlife Federation.